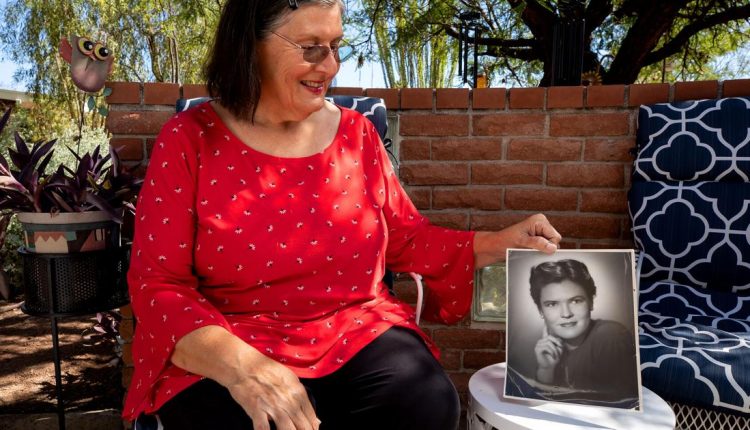 William Joseph McGowan was listed as missing in action for almost 75 years, but there was never much question about what happened to him.

The 23-year-old American pilot was shot from the sky over Normandy on June 6, 1944, while attacking German targets near the French city of Saint-Lô.

Witnesses saw his knit P-47 Thunderbolt crash down in a pasture, where it burned for more than a day as the Allied invasion force fought its way ashore about 15 miles to the north.

His dog tags were recovered from the crash site, but his body never was.

It would take a multi-generational effort by family members in Tucson and elsewhere to win McGowan a proper burial after almost 80 years.

With more than a dozen of his relatives in attendance, the 2nd lieutenant with the US Army Air Forces was finally laid to rest at the Normandy American Cemetery in France on July 9.

“We felt the presence of our ancestors with us, because they would have been so happy,” said Mary Saraceni, a life-long Tucsonan who attended the ceremony for her Uncle Bill. “We just knew it was this burning desire of my mom and my aunt and my honorary auntie, his widow, to get this buttoned up and done with.

“They tried really hard to get it done in their lifetime,” Saraceni said, “so it was very important to my generation to get this done.”

The first official search for William McGowan took place in 1947, when a team from the US Army’s Graves Registration Command interviewed witnesses and combed through the apparent crash site near the village of Moon-sur-Elle.

They collected wreckage from the P-47 but ultimately determined that his remains could not be recovered.

The pasture was searched again in 2010, this time by the Defense POW/MIA Accounting Agency at the request of McGowan’s nephew, Paul Stouffer.

No remains were immediately found, but the DPAA did recover enough airplane debris to recommend further investigation.

In the summer of 2018, a team from the St. Mary’s University Forensic Aviation Archaeological Field School in Halifax, Nova Scotia, excavated the crash site at Moon-sur-Elle.

Saraceni said the dig turned up a few bone fragments and a tooth that matched the DNA of six of McGowan’s living relatives.

The news was welcome, if bittersweet. By then, there were no living relatives left from McGowan’s generation or the one before it.

“All that delay had built up a well of emotions,” Saraceni said. “It had been this roller coaster of emotions, because my whole life he was missing in action. Then suddenly we had confirmation, and we were ready to bury him.”

But their odyssey wasn’t over quite yet.

The family originally planned to lay McGowan to rest on July 26, 2020, on what would have been his 100th birthday.

Then the coronavirus pandemic hit, and travel to France became impossible.

The closure the McGowan family had all been seeking since the Second World War would have to wait two more years.

William McGowan was born in 1920 into a family of journalists.

His father, Joseph, owned a weekly newspaper in the small town of Benson, Minnesota, and all three of the McGowan kids – William, Patricia and Mary Jo – worked there for a time and studied journalism in college.

After graduating from the University of Missouri School of Journalism in 1942, McGowan briefly worked for the United Press in Madison, Wisconsin, and for his hometown paper, before reporting to Texas for basic flight training in early 1943.

Late that year, he was sent to fighter pilot school in Baton Rouge, Louisiana, where he married his college sweetheart and fellow Minnesotan Suzanne “Suki” Schaefer at the base chapel on Feb. 5, 1944.

Two months later, he shipped out to England. Two months after that, he was gone.

But with no body to bury, McGowan’s mother, Mary, could only cling to hope.

“My nana was holding onto the idea that he parachuted out, had amnesia, married some little French country girl, and he was still alive,” Saraceni said. “I think that would be a typical mom reaction.”

In 1948, Patricia McGowan traveled to France by herself to find out what happened to her brother.

Saraceni said her mother crossed the Atlantic on an ocean liner that had just returned to passenger service after spending the war as an Allied troop transport.

The gutsy, already-accomplished magazine writer brought along her bicycle so she could ride around the countryside in search of her brother’s crash site. The 24-year-old spoke no French, but she eventually found someone who led her to an empty field with a propeller sticking out of it.

“She said they treated her like royalty as soon as they realized she was the sister of the airman who protected their village,” Saraceni said.

Pat returned to France in 1953, this time to escort her parents and her sister to the crash site. She snapped a photo of the three of them standing in the field, staring solemnly at the propeller.

They also visited the obelisk the village had erected in McGowan’s honor at the church across from where he crashed.

Some of the people they met in Moon-sur-Elle became allies for life, pressing officials in France for decades to memorialize the site and resume recovery efforts.

One man in particular, Pierre Labbé, went from being an eyewitness to the crash at the age of 14 to a crucial source of information for investigators, leading them in 2010 to the impact crater and more wreckage from the P-47.

Saraceni said Labbé stayed in contact with the family – and continued to advocate on McGowan’s behalf – until his own death a few years ago.

When the 2010 search of the crash site ultimately ended in disappointment, the residents of Moon-sur-Elle responded with another tribute to their fallen hero. They turned a patch of land next to the pasture into a memorial park, complete with a monument to McGowan and a place for family picnics.

By 1950, the McGowan family had sold their newspaper in Minnesota and moved to Tucson in search of warmer weather.

Pat McGowan soon began taking pictures and writing stories for the Tucson Citizen, as she pursued a master’s degree in journalism from the University of Arizona.

One of her many bylines from that year was an on-set interview at Old Tucson with a Hollywood star named Ronny Reagan. Another was a human interest story about her own 57-year-old father enrolling in the same freshman class at the U of A as his mortified youngest daughter, Mary Jo. They shared the same Spanish class, and both were journalism majors, naturally.

The McGowan sisters eventually got married and started families of their own. Mary Jo traveled the world with her military husband, while Pat sank roots in Tucson and never really left.

And through it all, they continued to lobby on behalf of their missing brother.

“They wrote letters. They contacted the Air Force. Because they were all journalists, they wanted this documented, recorded and acknowledged, but it just didn’t happen in their lifetime,” said Saraceni, who retired earlier this year herself after more than 30 years as a teacher and counselor with the Tucson Unified School District.

In 1995, when Pat was 71, she and Saraceni took a cruise together that included a stop in La Havre, France.

While most of the other passengers headed off on tours of Paris, the mother and daughter rented a car and drove to Saint-Lô.

“She was so insistent that knew someone in her direct family line where this place was so that it didn’t get lost in the shuffle,” Saraceni said.

Her mom still didn’t speak any French, but she was the same fearless reporter she always had been. Whenever they would lose their way to Moon-sur-Elle, she would tell her daughter to stop the car so she could jump out and start knocking on random doors.

Everyone they met was happy to help, once they realized who she was and what she was looking for, Saraceni said. “If they’d had a red carpet, they would have rolled it out.”

When they finally arrived at the church across the street from the crash site, they had picked up a tractor escort from a local farmer who didn’t want them to go the wrong way.

Afterwards, they stopped at a local restaurant for a bite to eat.

“By then the buzz was in the community, and people would come to our table,” Saraceni said. “It was like she was Elton John visiting. It was like, ‘Can I have your autograph?’ It was just really kind of sweet.”

Pat McGowan Bayly died in Tucson three years later at the age of 74.

Suzanne Schaefer Bryan, McGowan’s wartime bride of just four months, was the last of their generation to go. She died in California at age 96 on March 5, 2018, roughly 6 months before her first husband was finally found.

The July 9 service at the Normandy American Cemetery and Memorial was just the fourth burial there since 1955.

“It’s very rare,” said Scott Desjardins, superintendent of the cemetery, in a phone interview from France on Friday.

The burial ground on the bluff above Omaha Beach contains the graves of 9,386 men and women, most of whom lost their lives during the D-Day landings or the ensuing campaign to liberate Paris.

McGowan was already listed, along with 1,556 others, on the cemetery’s Walls of the Missing, a curved garden of marble panels on the east side of the memorial.

A rosette has since been added next to his name to indicate his recovery and identification.

There are now 20 such rosettes affixed to the marble walls for those no longer missing.

Desjardins said McGowan was buried with full military honors, using the same protocols as those at Arlington National Cemetery.

Two US Air Force F-15s crossed the English Channel from their base at Mildenhall, England, to perform a ceremonial flyover.

An honor guard of soldiers from the US Army Garrison in Grafenwoehr, Germany, fired a 21-gun salute and stood at attention as a bugler played “Taps.”

Three generations of McGowan relatives traveled to France for the service, including seven of the fallen pilot’s eight nieces and nephews. They were joined at the cemetery by military officials, local dignitaries and several World War II veterans.

Also in attendance was a French woman in her mid-80s, who came to the service in a wheelchair to pay her respects. The woman had seen the American’s airplane go down when she was a little girl, Saraceni said.

McGowan was laid to rest less than 300 miles away from his uncle and namesake, William Donnelly, who died during World War I and is buried at the Meuse-Argonne American Cemetery near the Belgian border.

The two cemeteries on French soil are operated by the American Battle Monuments Commission, a federal agency charged with maintaining 58 military cemeteries, memorials and monuments in the US and abroad.

As Desjardins put in a written statement following the July 9 burial, “It is our mission to care for those individuals who gave their lives in service to our nation, no matter how many years have passed since they made the ultimate sacrifice. It is our sole honor to provide Lt. McGowan a final resting place among those he served beside.”

McGowan was posthumously awarded the Purple Heart and the Air Medal.

After the graveside ceremony, Saraceni said she was given the honor of placing her uncle’s rosette on Walls of the Missing.

To make his name stand out on the white marble surface, family members took turns filling in the engraved letters with wet sand from the nearby beach.