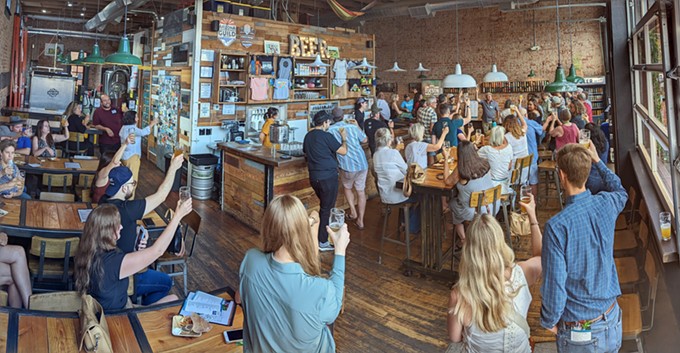 The Tucson City of Gastronomy certifications were unveiled on June 27 during a private event at Pueblo Vida Brewing Company on East Broadway in Tucson.

A new group of Tucson area restaurants, artisans, retailers and caterers have been certified by Tucson City of Gastronomy.

The certifications were announced June 27 at a private event at Pueblo Vida Brewing Company on East Broadway in Tucson.

UNESCO is the United Nations Educational, Scientific and Cultural Organization. It seeks to build peace though international cooperation in education, sciences and culture.

Tucson City of Gastronomy is a nonprofit 501(c)(3) organization. It began its certification program in 2020. Businesses that apply for the two-year certification must fit in one or more of these categories:

• Certificate that foods are made from scratch in their kitchens.

“Tucson has an amazing food scene,” said Dr. Jonathan Mabry, executive director of Tucson City of Gastronomy. “The whole goal of the program is to recognize these food businesses that are really leading by example in terms of supporting the local food economy, supporting our food heritage.”

Using sustainable innovative food practices, taking good care of their employees and giving back to the community are also considered when making the certifications, Mabry said.

Applicants may be located anywhere in the Southern Arizona foodshed, Mabry said. “We often think of it as Baja Arizona,” he said.

Earning a City of Gastronomy certificate is not based on the popularity of an applicant’s food, but more on the positive direction the businesses have taken in the Tucson-area culinary economic sector, Mabry said.

Corralie Satta of Ghini’s said, “My philosophy of Ghini’s is to emphasize freshness and simplicity. We only use whole and locally grown foods, creating dishes that taste amazing and are good for you—mind, body and soul.”

What does a business gain from having a Tucson City of Gastronomy sticker in its window? There are many benefits, Mabry said.

First, they get increased media attention and this attracts more customers. The businesses are promoted on the Tucson City of Gastronomy website and on social media. The group also produces a large email newsletter and prints rack cards to guide Tucson visitors to the businesses.

The Southern Arizona Visitors Center also promotes the businesses. Additionally, they are featured during Sonora Restaurant Week, the annual Tucson Cocktail Challenge and other culinary events during the year.

A field archaeologist, Mabry said he enjoys being part of Tucson City of Gastronomy.

“I love my job steering this nonprofit that is leveraging this very prestigious international designation to benefit the community and also to be a model within the UNESCO-created cities network,” he said.

Tucson is the only City of Gastronomy that has a business certification process and other cities are looking at it as a model, Mabry said.

“Visit Tucson has thousands and thousands of emails annually from people planning to visit who have seen something about UNESCO … and asking where to eat,” Mabry said. “I saw this as an opportunity to create this program that will guide these visitors and locals to which food businesses I should give my business to. The tagline for the whole program is uniquely local, responsible and delicious.”