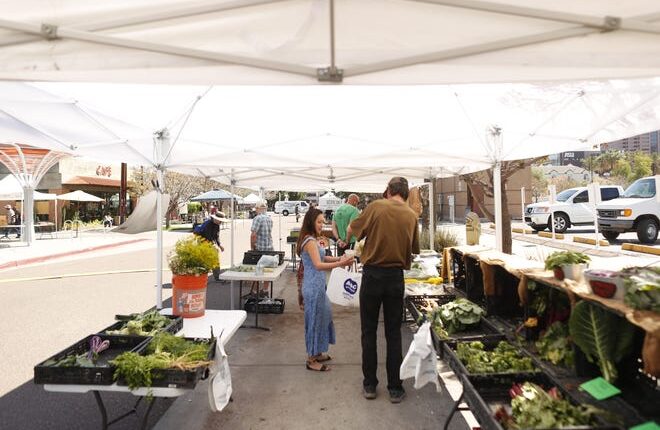 A Phoenix zoning adjustment hearing officer on Thursday approved a three-year permit for a farmers market to be held on a vacant tract in south Phoenix while the city moves forward with redevelopment plans for the land.

The city is prioritizing a grocery store and medical services in its request for development proposals for the southwest corner of 24th Street and Broadway Road.

Because getting the permanent development off the ground will take a while, the city and community organization Broadway Heritage Neighborhood Association are working with south Phoenix-based MAA Wellness Center to offer a temporary farmers market. MAA Wellness’ license will last 12 months, with the opportunity for month-to-month extensions.

“It’s still a three-to-five-year process before anything would happen on that land,” said Thomas Claiborn, president of the Broadway Heritage Neighborhood Association. “We just thought that was a way to really start building and establishing community in this space, and really bringing in resources that could really be an asset to a community in the meantime, instead of it just being dormant, vacant land.”

The goal is to host the market on the first Saturday of every month. MAA Wellness hopes to start at the end of February.

“I think health is so important these days and we will address it in the food that we are selling to the community,” said Vee Braxon, who serves on the board of MAA Wellness.

The plan is for the market to have live entertainment, Braxton said. There’s a desire to reactivate the area around 24th and Broadway, “to bring people to that area, so people will know that there is something bigger than what we’re doing that’s going to appear there,” he said.

Madeleine Parrish covers south Phoenix for The Arizona Republic. Reach her at [email protected] and follow her on Twitter @maddieparrish61.

10 Unique Things To Do In Tucson