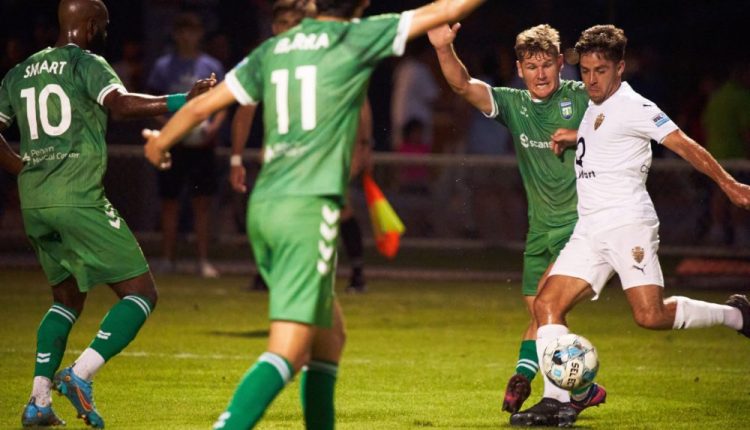 FC Tucson has not won at home this season (FC Tucson photo).

FC Tucson’s struggles to generate a win at Kino North Complex continued Saturday night as the Men in Black lost to the Greenville Triumph 1-0.

“I thought it was a really exciting match, a back-and-forth affair with lots of chances in the first half for both teams,” FC Tucson head coach Jon Pearlman said. “I’m not really gonna sit here and tell you that we didn’t play well. I thought we played pretty well, but I think it’s just indicative of the season. This is the 30th one-goal game where we didn’t come away with any points.”

“There was a lot of belief coming into this game that we could get the three points,” midfielder Charlie Machell said. “Yeah, it’s heavy, the pitch was very heavy at night, but still, we’ve gotta take that momentum forward.”

The short week proved somewhat of a challenge for Pearlman and his group to adjust in terms of finding the right spots for players.

“I think for us, we made a couple changes to the starting rotation,” Pearlman said. “I think that when you have a result like that and you’re really good defensively and you can run those guys back out there. obviously, (Eric) Kinser had to come out and that’s okay. We knew we had to use Jacob (crull) at some point and maybe move Donny (Toia) up

“If we were winning, we could’ve swapped Jake for Donny and that would’ve been enough. But again, when you’re where we are on the table, you gotta put the guys you trust and the best 11 you can put out there you need three points every time out. we knew we needed a six-point week to give ourselves a chance in the last 11 games or so.”

Tucson battled with the first place Greenville Triumph (11-6-5, 38 points) from the first to final whistle. It kept the USL’s leading scorer Jacob Labovitz dormant for almost the entirety of the match.

At the end, Tucson had possession of the ball for 63 percent of the match and led in shots 13-12. It was the lone goal scored in the 47th minute by Greenville that proved to be the difference.

The loss keeps the Men In Black at 11th place in the USL League One standings. It is now 13 points below the sixth-place Charlotte Independence ( 8-8-5, 29 points). Sixth place is the last qualifying place for the playoffs.

“It’s never easy to lose a match, whether you win 10 in a row or you lose one,” Machell said. “It’s one of those things where you gotta keep going. There’s still a lot of points to play for. If we quit now, then we may as well not be in this position.

The last time these two teams met, Toia scored the match tying goal in the 85th minute at Kino North Complex, securing the 1-1 draw on July 3. They will play each other again on Oct. 1 at Greenville.

Both teams had their share of shots taken before the end of the incredibly competitive first half. Greenville just outshot Tucson with eight attempts, two being on target.

FC Tucson attempted six shots before the start of the intermission with just one of those being on target. Tucson did edge Greenville in possession, having control of the ball for 54 percent of the first half.

Two minutes into the start of the second half, it was Greenville that would break through for the first and only goal. Aaron Walker scored at the 47-minute mark, shooting the ball just past Carlos Merancio.

Tucson had control of the ball for the remainder of the second period, but just couldn’t seem to hit that final goal that it had been so close to making in earlier chances.

FC Tucson returns to the pitch Saturday, when it will take on North Carolina FC at WakeMed Soccer Park at 4 pm

With 10 matches remaining on the schedule, there is still time for the Men In Black to gain enough points for a playoff seeding.