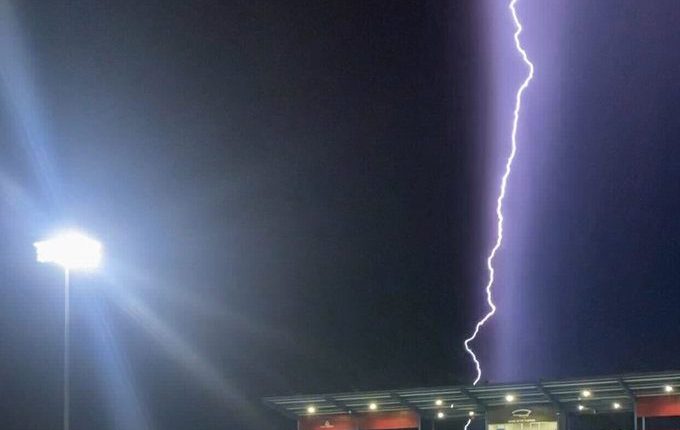 FC Tucson’s (3-9-4, 13 points) struggles to continue muster up points for a playoff push, suffering his latest loss Saturday to the Charlotte Independence (6-7-4, 22 points) 3-2 at the Kino North Complex .

“Obviously another late defeat, I’m incredibly disappointed,” FC Tucson head coach Jon Pearlman said. “Right now, it’s pretty emotional, so I don’t really have any thoughts. Frustration, anger and disappointment is probably at the top of the list right now. I think that’s what everyone here at FC Tucson, who works here, plays for us and supports us feels right now.”

With just 10 minutes left in the match, severe rain and lightning came rolling in and forced a delay for more than an hour.

The loss keeps FC Tucson at 11th place in the division and marks almost a month since it has last won a match.

“We have senior players who can finish on the field. We have guys who have finished before in the past. We have senior leadership on the field at the end of this game. I don’t really know much more I could do from a selection standpoint,” Pearlman said about the struggles with closing games. “The bottom line is we had a chance to put this game away and we’re not doing it.”

Slow starts have constantly plagued FC Tucson this season and Saturday night was no exception as Charlotte knocked in his first goal just three and a half minutes into the match.

“Our team struggled to defensively adjust defensively in the beginning with the numbers in the central midfield,” Pearlman said. “Our underneath forwards need to be a part of that block and we adjusted in later moments.”

midfielder Omar Ciss knocked the shot in past the right side of Carlos Merancio and in the lower left corner to take the early 1-0 lead.

The Men In Black have taken thrir time in the past to find and make equalizing goals, that is until Saturday when it only took seven minutes to answer back with a goal of their own.

Tyler Allen kicked the ball from the right corner of the pitch directly to Donny Toiawho then headed it in to tie the match at 1 apiece.

Toia made his return to the pitch after serving a one-game suspension for receiving a red card against Northern Colorado on July 9. It is Toia’s third goal in as many matches.

FC Tucson did not let that momentum go to waste as 19 minutes in, Kaelon Fox scored the second goal of the first half.

Gio Calixtro lined up for the corner kick and hit Fox in almost perfect position to knock in the second header of the match.

Before the first half could end, Charlotte turned it into a shootout with its second goal of the night, the fourth before the intermission.

Safe Mbuyu knocked in the third header of the match at the 37-minute mark. Neither team would score after that and they went inot the locker room tied at 2-2.

FC Tucson shot seven times with four being on target before the half. Charlotte shot less, but was more efficient with them, shooting four times with two on target.

Both FC Tucson and Charlotte competed strongly to score on one another, but neither team could delay before the start of the storm.

Charlotte proved to be the fresher team coming out of the hour-long break, scoring the final goal of the match to take the 3-2 lead.

By the end of the match, FC Tucson led Charlotte in shots 17-10 and barely edged it out 7-6 in shots on target.

With 14 games left in the season, FC Tucson needs to start putting wins together, starting with North Carolina FC (5-8-3, 18 points) next Saturday at Kino North Complex. That match will begin at 7 p.m

Letter to the Editor: Manchin view leads to push for asking senators to take action | letters