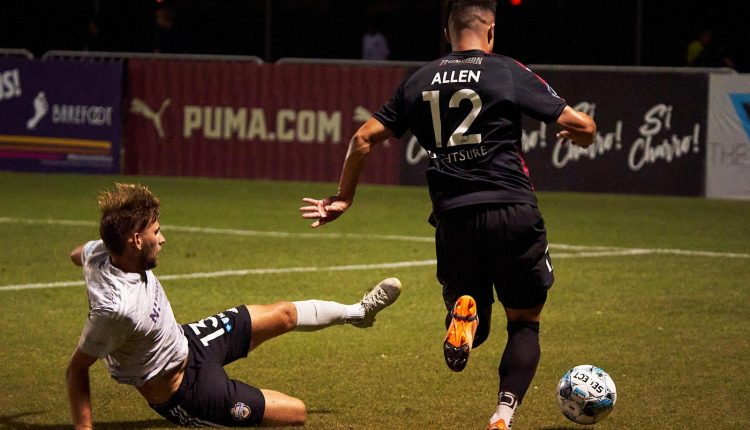 FC Tucson succumbs to another late goal in storm-delayed match

It was another disappointing night for FC Tucson at Kino North Stadium on Saturday night. After a strong early comeback and a two-hour weather delay, the team succumbed to a late goal from Charlotte Independence.

After the match, a frustrated coach Jon Pearlman wondered if the soccer squad was “snake bit.”

“I pay my taxes; I’m treating people decently; I’m loving my staff,” he said. “I don’t know what we can do to change it. We aren’t far away, but it feels like it.”

The match started out shaky for the home team. Charlotte came out in a formation that Tucson FC did not expect, a 4 – 4 – 2 with a diamond midfield. It took some time to adjust, and unfortunately in that time Charlotte’s Omar Ciss scored.

After getting control of the match, Tucson was able to respond. Tyler Allen got the ball to Donny Toia, who headed it past Charlotte keeper Adrián Zendejas. It was Toia’s third goal in as many games.

A 19th-minute corner kick eventually ended up on the forehead of Kaelon Fox, who delivered it past the keeper to give Tucson the lead.

Charlotte’s most dangerous forward is Tresor Mbuyu, and he showed it with a header in the 37th minute that tied the match.

Tucson scraped their way back into the match as the second half wore on. Daniel Bedoya, Louie Perez, Giovanni Calixtro and Tevin Shaw all had strong chances. The momentum was going FC Tucson’s way. Weather intervened, however. Lightning in the area caused the game to be suspended in the 80th minute.

By the time play resumed, it was nearly 11 p.m. Charlotte had only one good chance, and they made the most of it. Charlotte midfielder Christopher Hegardt flicked a quick shot into Tucson’s goal. The entire team came off the bench to celebrate, which earned a verbal warning from the referee. They had reason to be happy, though. Their struggling team earned three points on the road.

There were many good individual performances: keeper Carlos Merancio recorded three saves that kept the match close; Tyler Allen created several chances for the forwards; Donny Toia maintained his scoring streak. Something isn’t clicking for the team though, and time is getting short.

“This team is disappointing everybody,” said Pearlman. “Not from an effort standpoint, but just not getting past the finish line…we had the chance to put this game three or four to one away and we are not doing it.”

“I’m hurting, the team is hurting. There is no reason to put anything more on them,” he added.