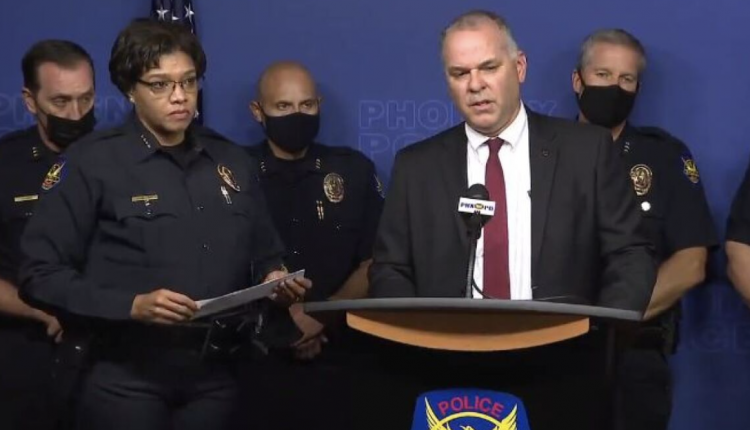 The city so far has spent $1.9 million on its efforts to cooperate with the US Justice Department civil investigation into Phoenix Police.

The bulk of that expense up to now has involved the $1.35 million in salaries paid to the nine full-time employees who have been assigned to gather materials requested by the justice department since it began its investigation Aug. 5, according to a memo that City Manager Jeffrey Barton and the city law department sent city council on June 30.

The investigation is focusing on five broad areas of police conduct: whether the department uses excessive force, including deadly force; whether it engages in discriminatory practices; whether it retaliates against protestors or demonstrators; how it deals with behavioral health issues on calls to people in mental crisis; and whether it violates the rights of unsheltered people by confiscating their belongings.

It is unclear if the deadly force investigation includes the May 2020 shooting death of Ryan Whitaker in the doorway of his Ahwatukee condominium that occurred after two officers answered a domestic disturbance call that turned out to be woefully exaggerated by the never-identified caller, partly after a 911 operator told him how to get police to respond more quickly.

The city settled a lawsuit filed by Whitaker’s family, agreeing to pay $3 million. The county attorney declined to file charges against the cop who fired the two fatal shots in Whitaker’s back and while that officer was fired by the department, he was ordered reinstated by an independent review board.

Although Barton sent the memo to council the day before its last meeting prior to its summer break, it was not brought up for discussion.

In his memo, Barton also suggested that the cost of compliance may be only the tip of the iceberg for taxpayers in light of other similar justice department investigations in other cities launched under the Obama administration.

The memo indicates that city staff have been cooperating with federal investigators in a variety of ways, including complying with two requests for documents. To comply with those requests, the city provided 80,931 documents totaling close to 1.1 million pages. The nature of those documents was not disclosed.

Additionally, the city facilitated visits from Justice Department investigators in April and May that involved precinct tours, interviews with police and civilian personnel, ridealongs and 14 panel interviews with 3 to 6 city employees at a time, according to the memo.

Investigators also observed police academy classes and the city has devoted personnel to maintaining a web page to provide citizens with an update on the Justice Department probe. That web page is phoenix.gov/police/doj.

The city also hired Steptoe LLC as outside counsel to provide legal services and a Louisiana consultant named Danny Murphy to provide other advice.

Steptoe so far as charged taxpayers $57,258 for its services while Murphy has cost $3,200. In addition, the city spent $10,500 to train city personnel on the use of a digital tool to find and retrieve documents and $350,000 on document review contracts with Business Intelligence Associates Inc. and QuisLex Inc. for three years. Those contracts were part of the consent agenda approved by city council July 1 without discussion.

According to a separate memo to council, “These contracts will provide document review legal services to assist the law department with high-volume document review projects, especially related to the Department of Justice investigation, that involve analysis and sorting of legally privileged and/or confidential information.

“These services are critical to allow the law department to timely and efficiently comply with document requests while ensuring that privileged, confidential and otherwise protected information is properly identified and secured,” the memo stated.

As perhaps a warning to council that taxpayers’ expenses for the justice department probe had only just begun, the city administration summarized the cost of seven similar federal probes into large metropolitan police departments that have occurred since 2012.

The report not only looked at the cost of cooperating with investigators but also how much the city is spending to monitor compliance with consent decrees that were worked out between the municipalities and the justice department.

Among those federal investigations is Baltimore, where city police were under the microscope from May 2015 to August 2016 for excessive force, investigation of rape cases, community engagement and unconstitutional stops and arrests. Baltimore incurred $10.5 million in investigation costs and has budgeted $38.6 million this year alone for its compliance bureau.

Another costly investigation involved in Chicago, where an ongoing federal probe into excessive force and discriminatory policing practices started in 2015 and so far, has cost $25.7 million.

Barton’s review of the seven police probes also shows it’s not just large city police departments that can run up high costs during a federal probe.

Albuquerque so far has spent $25 million on an investigation into excessive force and responses to people in mental crisis that has been ongoing for eight years, according to Barton.

Even more expensive is a probe into the Newark Police Department that is entering the seventh year of a probe into accusations of excessive force, unconstitutional stops and arrests and discriminatory policing. That investigation has cost $8 million a year for the last seven years, the memo stated.

By far the most expensive federal probe has involved Seattle, where an investigation that began in 2011 cost $100 million for the first eight years is now costing another $7.9 million annually.

But a portion of a memo by Seattle officials included in Barton’s memo said this involved the implementation. of new technology that shows “this investment was worthwhile.”

Cleveland PD also has run up a tab for taxpayers since the justice department began probing excessive force complaints in 2013. Initial costs were $11 million in 2015 and the ongoing probe since then has cost $11 million a year with no end in sight.

The seventh city listed in Barton’s memo is New Orleans, where the justice department is probing accusations of excessive force, unconstitutional stops and arrests and faulty handling of rape and domestic violence cases. That probe cost an estimated $7 million from 2012 to 2020 and is costing $2 million a year for monitoring compliance with a consent decree.

The status of the justice department probe of Phoenix police is unclear, although outgoing Police Chief Geri Williams and other city administration and council officials welcomed it when the Biden administration announced the probe.

In August, the Justice Department said it also “will include a comprehensive review of Phoenix department policies, training, supervision, and force investigations, as well as Phoenix police department’s systems of accountability, including misconduct, complaint intake, investigation, review, disposition and discipline.”

Attorney General Merrick Garland said, “When we conduct pattern or practice investigations to determine whether the Constitution or federal law has been violated, our aim is to promote transparency and accountability. This increases public trust, which in turn increases public safety. We know that law enforcement shares these goals.”

Added Assistant Attorney General Kristen Clarke: “One of the highest priorities of the civil rights division is to ensure that every person in this country benefits from policing that is lawful, effective, transparent and free from discrimination. Police officers across the country must use their authority in a manner that adheres to the Constitution, complies with federal civil laws rights and respects human dignity.”

The investigation is being conducted pursuant to the Violent Crime Control and Law Enforcement Act of 1994, which prohibits state and local governments from engaging in a pattern or practice of conduct by law enforcement officers that deprives individuals of rights protected by the Constitution or federal law. The statute allows the justice department to remedy such misconduct through civil litigation.

The Special Litigation Section of the Department of Justice Civil Rights Division in Washington, DC, is conducting the investigation.

People who wish to file a complaint in connection with it can email [email protected] or call 866-432-0335. Individuals can also report civil rights violations at civilrights.justice.gov.