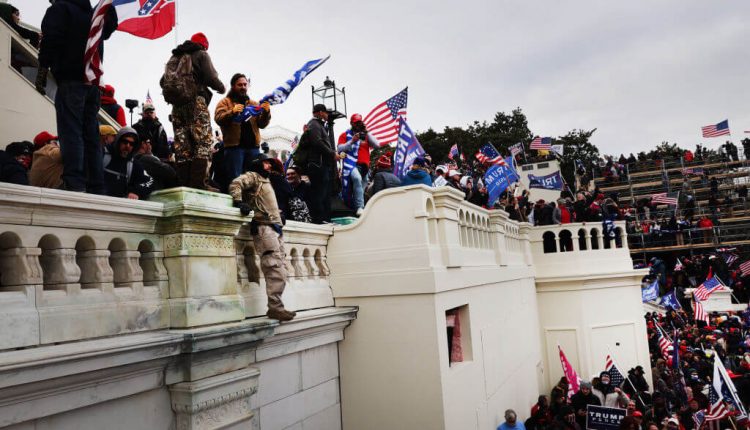 WASHINGTON — Stewart Rhodes, the founder of the far-right militia group the Oath Keepers, was charged with seditious conspiracy in organizing an attack on the U.S. Capitol and disrupting the Electoral College certification of the president, the Justice Department announced Thursday.

Edward Vallejo, 63, of Phoenix is charged along with Rhodes in connection with events leading up to and during the Jan. 6 insurrection undertaken by pro-Trump supporters. Both Rhodes, who has ties to Montana, and Vallejo were arrested Thursday morning.

These are the first charges of seditious conspiracy that prosecutors have brought in connection with the Jan. 6 attack. The Oath Keepers are “a large but loosely organized collection of individuals, some of whom are associated with militias,” the government said.

DOJ described how the Oath Keepers recruited allies; organized teams and weapons including knives and batons; organized training in paramilitary combat tactics; used force against police attempting to protect the Capitol; and continued to plot via social media and other means following Jan. 6.

“At approximately 2:30 p.m., as detailed in the indictment, Hackett, Harrelson, Meggs, Moerschel and Watkins, and other Oath Keepers and affiliates — many wearing paramilitary clothing and patches with the Oath Keepers name, logo, and insignia — marched in a ‘stack’ formation up the east steps of the Capitol, joined a mob, and made their way into the Capitol,” DOJ said.

“Later, another group of Oath Keepers and associates, including James, Minuta, and Ulrich, formed a second ‘stack’ and breached the Capitol grounds, marching from the west side to the east side of the Capitol building and up the east stairs and into the building.”

DOJ said that a charge of seditious conspiracy carries a statutory maximum penalty of 20 years in prison.

The indictment alleges that following the presidential election in November 2020, Rhodes “conspired with his co-defendants and others to oppose by force the execution of the laws governing the transfer of presidential power by Jan. 20, 2021,” DOJ said.

In December 2020, Rhodes and his co-conspirators coordinated to travel to Washington, D.C., on the date of the certification of the Electoral College votes, via encrypted and private communications, DOJ said.

Rhodes, who was not charged with entering the Capitol on Jan. 6, made plans to bring weapons, the Justice Department said.

During the attack, some Oath Keepers remained outside the city, where they were part of “quick reaction force” teams expected to “rapidly transport firearms and other weapons into Washington, D.C., in support of operations aimed at using force to stop the lawful transfer of presidential power,” DOJ said.

The indictment alleges that the quick reaction force teams were in part coordinated by Caldwell and Vallejo.

Rhodes is a former U.S. Army paratrooper and Yale Law School graduate. He was disbarred in Montana in 2015 after the Montana Supreme Court found that he abandoned clients he had in Arizona, NBC News reported.

In 2018, Rhodes’ wife filed a petition for temporary protection in Lincoln County, Montana, from her husband. In the petition, she wrote that Rhodes would often threaten her and their children with weapons and had frequent outbursts, with one leading to choking his teenage daughter.

Phoenix man charged with 10 others in riot conspiracy in Capitol break-in Jan. 6