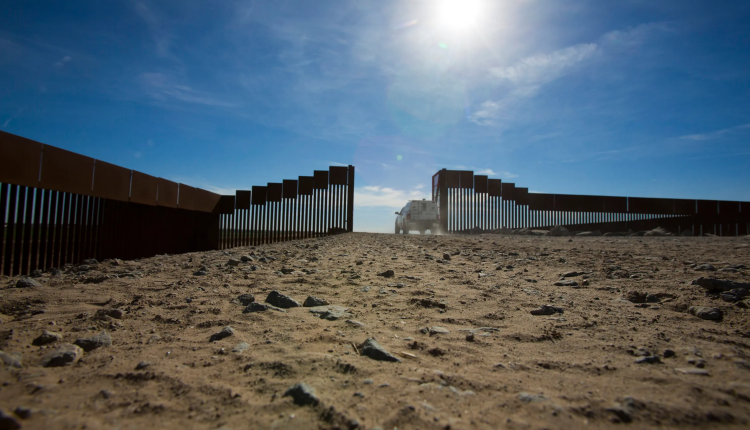 On October 17, the local Fox affiliate in Phoenix reported that the Biden administration is demanding that Arizona Governor Doug Ducey (R) remove shipping containers his state moved in to plug the holes in border wall fencing at an illegal-entry hotspot known as the “ Yuma Gap”. The White House is suddenly concerned about “trespassing” at the Southwest border — but only when it involves Republican governors, not illegal migrants.

The Yuma Gap. The Border Patrol’s Yuma sector is huge — it has responsibility over more than 180,000 square miles in southwestern Arizona and an adjacent portion of California — but only has jurisdiction over less than a tenth of the 1,954-mile Southwest border.

As I have explained in the past, there’s fencing along most of the border in Yuma sector — but not all of it. The uncompleted sections of fence directly adjacent to the Morelos Dam (which was built in 1950 across the Colorado River) are called the “Yuma gap”, and when I was down there in February, I was told that it’s the most heavily traveled area for illegal migrants into the sector.

That’s saying something because a lot of aliens have crossed illegally into Yuma sector this year. Agents there apprehended more than 284,000 illegal entrants in the first 11 months of FY 2022, 31 times as many as in FY 2020 (admittedly an outlier year due to Covid-19 shutdowns), but saliently more than three times as many as during the ” border emergency” in FY 2019.

Politics and Promised Construction. The midterm congressional elections are less than three weeks away, and control of the Senate hangs in the balance. That body is currently evenly divided, with both the Democrats and Republicans controlling 50 seats in the upper chamber. Vice President Kamala Harris, as president of the Senate, casts the tie-breaking vote, which is why Democratic Sen. Chuck Schumer (NY) is majority leader.

If Republicans can gain one senate seat, Republican Mitch McConnell (Ky.) will replace Schumer, giving the GOP power to set the chamber’s legislative agenda and, as importantly, block Biden from appointing the most liberal judges to the federal bench.

One of the most hotly contested seats in the November midterms is currently occupied by Sen. Mark Kelly, Democrat from Arizona. Summer polling in the Grand Canyon State revealed that 78 percent of respondents think illegal immigration is “bad for America”, while 62 percent of Arizonans supported building a border “wall” (with 45 percent “strongly supporting” barriers).

Given this, it’s likely not a coincidence that DHS announced in late July it would be closing the Yuma Gap, in a marked departure from the administration’s rather dour view on border fencing (then-candidate Joe Biden asserted on the campaign trail that “Building a wall will do little to deter criminals and cartels seeking to exploit our borders”).

In the two-plus months since DHS made that announcement, however, there has been no construction at the gap. That’s not to say that the Yuma Gap hasn’t been plugged — after a fashion. In August, Ducey took it upon himself to have “double-stacked and secured shipping containers” placed within the gap.

Bureau of Complaint Letters. Which brings me to a letter Jacklynn L. Gould, PE, regional director for the US Bureau of Reclamation sent to Allen Clark (director of Arizona’s Division of Emergency Management) and Tim Roemer (director of the state’s Department of Homeland Security) last week. Gould demanded that Arizona remove its containers from the Yuma Gap, as well as others placed on the exterior boundaries of the Cocopah Indian Tribe’s West Reservation.

That letter states: “The unauthorized placement of those containers constitutes a violation of federal law and is a trespass against the United States. … That trespass is harming federal lands and resources and impeding Reclamation’s ability to perform its mission.”

So, to be clear, it’s the administration’s official position that the illegal entry of tens of thousands of illegal migrants through the Yuma Gap was not the sort of “trespass” that required a federal response for 17 months, but the placement of shipping containers to Impede the progress of future migrants is.

To be fair, of course, none of those migrants intend to stick around the gap for long. Their plans are usually to surrender to Border Patrol as quickly as possible to be released into the interior of the United States, where they will be allowed to remain indefinitely (if not forever). The containers are stationary, at least until DHS fulfills its July promise to close the Yuma Gap.

Arizona’s Response. In any event, and not surprisingly, Fox News reports that Ducey’s administration was quick to respond. According to the outlet, Clark stated in his reply to the bureau:

The myriad of federal agencies that claim jurisdiction on the southern border but do nothing to prevent the public nuisance caused by illegal immigration and criminal activity that exploits the open border is quite frustrating to those that live, work and recreate on that border and in our state .

You can sense the Arizonan’s frustration.

It should be noted that DHS does not plan to begin closing the gap until “early 2023”, which raises the question of how much trespass and environmental degradation will occur in, on, and around the Morelos Dam if the bureau (whose mission “is to … protect water and related resources in an environmentally and economically sound manner in the interest of the American public”) gets its way.

Likely Headed to Court. Interestingly, however, Clark also contends that the state isn’t actually violating federal law. He notes that the regulation at issue, 43 CFR § 429.4(c)(8), “provides that ‘activities authorized under other Federal statutes or regulations’ are not subject to regulation”.

As Clark explains: “Since, the US Constitution provides for the protection of the states (Article IV, section 4) and specifically reserves the right of states to defend themselves (Article 1, section 10), the regulation you cite does not prohibit Arizona’s actions.”

Article I, Section 10 of the US Constitution is the “invasion” clause, and as a lawyer I am somewhat reluctant to interpret that provision as applying to the illegal entry of migrants through the Yuma Gap.

That said, 56 percent of Arizonans polled believe that what’s occurring at the Southwest border is an “invasion” (38 percent said it wasn’t, and 6 percent weren’t sure), as do 53 percent of Americans.

Unless the Biden administration removes Ducey’s containers (which would be a bad look, especially before the midterms), the matter is likely headed to federal court. The courts, on numerous occasions, have ducked interpreting the invasion clause, but this time they may not have a choice.

Poor political timing. This dust-up likely could not have come at a worse time for Kelly’s reelection bid. The incumbent has been critical of Biden’s border policies, recently asserting: “I’ve spent a lot of time on our southern border, and let me just say it’s a mess. It’s chaos. It’s crisis after crisis.” That said, he could have done more to ameliorate the dreadful state of the border, but hasn’t.

His Republican opponent, Blake Masters, is down by just one point against Kelly in a recent poll, and has been closing his own gap with the sitting senator in the past few weeks. The bureau’s current demands are like an in-kind contribution to Masters’ campaign.

Arizonans, like other residents of Southwest border states and Americans as a whole, are frustrated with a Biden administration that inherited a modicum of border security and squandered it. If the White House is newly interested in going after “trespassers”, it can start with the 284,000-plus migrants who have entered illegally through Yuma sector in FY 2022. But it should leave Arizona alone.