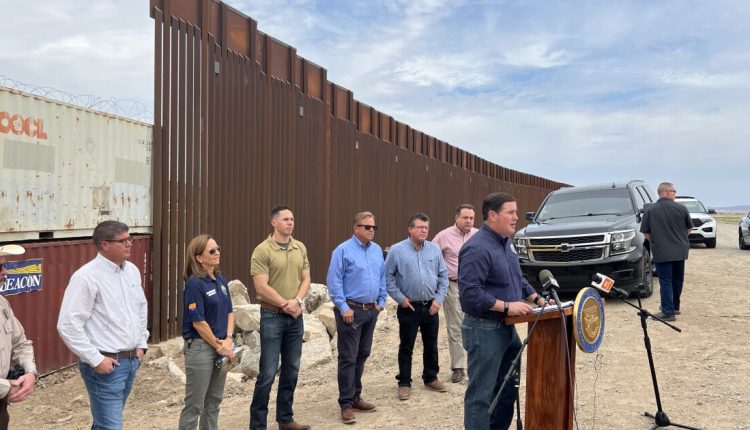 By Howard Fischer
Capitol Media Services
PHOENIX — Federal officials want Arizona Gov. Doug Ducey to remove shipping containers he ordered placed along the border near Yuma and abandon his plans to put more there.
In a Friday letter to Ducey agency chiefs, Jacklynn Gould, regional director of the Bureau of Reclamation, said the state’s “unauthorized placement” of the containers on federal property and that of the Cocopah Indian Tribe is a violation of federal law “and is a trespass against the United States.”
“That trespass is harming federal lands and resources and impeding Reclamation’s ability to perform its mission,” she wrote to Tim Roemer who is director of the state’s Department of Homeland Security and Allen Clark who heads the Division of Emergency Management.
Gould said this is not simply a question of the federal government wanting Ducey’s shipping containers off its property.
She said Customs and Border Protection already has awarded a contract for closure of two of the gaps in the previously constructed wall on Bureau of Reclamation land near Morelos Dam, where the state has put the double-high barrier of containers. And Gould said there also are plans to close other gaps in the area.
All that, she said, means the state’s placement of the containers is interfering with the federal government’s own plans.
“You are requested to work with Reclamation, in consultation with the Cocopah Indian Tribe, so that Customs and Border Protection’s project may proceed without unnecessary delay,” Gould wrote to the state officials. And she said that her agency will be reaching out ” to discuss a way forward and requests your cooperation in the removal of the containers.”
Ducey press aide CJ Karamargin said the administration is reviewing the letter.
But he also noted the timing of Gould’s statement that there are plans to fill the gaps.
“They’ve been talking about taking action for months,” Karamargin told Capitol Media Services.
“The only thing they’ve managed to do is write a letter,” he continued. “We filled 3,800 linear feet of gap in two weeks.”
But Karamargin sidestepped questions of whether it is legal for the state to put the trailers on federal land.
“The federal government has been negligent in its responsibility of securing the border,” he responded. “So the state of Arizona acted.”
Nothing in Gould’s letter addresses previously announced plans by the governor to place containers elsewhere along the international border.
One place that now appears to be out of the picture is in and around Nogales.
The Nogales International reported that dozens of the shipping containers that had been stacked up at the National Guard Armory awaiting placement are now gone. Karamargin said that should not come as a surprise, as the plans for use of the containers were dependent on terrain.
“The governor said in his State of the State that he will use border barriers where appropriate,” he said
“Areas that are mountainous and rocky may not be the best place for shipping containers.
But Karamargin said Ducey is “looking at other areas where they could be appropriate.”
“There are gaps all along the border because of the Biden administration’s decision to halt construction,” he said. “So we are looking at all of those gaps.”
Karamargin said that includes Cochise County, where the state has been stockpiling containers near the Whetstone community north of Sierra Vista. None have been moved to the border so far.
The issue traces its roots back to an executive order Joe Biden issued on his first day of office in 2021 holding further construction of the border wall that had been a centerpiece of the Trump administration.
But the administration in July authorized completion of stretches of the border wall near Yuma, one of the busiest crossings for illegal immigration. That came after Sen. Mark Kelly, hoping to win his election this year, had pressed to close the gaps.
Ducey announced his plans for Yuma about a month later. And he was able to install the containers before any federal action.
Even Kelly said he gets why the governor was proceeding.
“I understand the governor’s sentiment on this and why he wanted to do that,” the senator said during a media availability in August. “There’s a crisis at the border and it’s important to address it.”
Gould, however, said the containers have to go so the federal project can proceed.
The state’s cost for the project is coming from a $564 million Border Security Fund approved by lawmakers earlier this year. That specifically includes $335 million for the state to construct and maintain a border fence or purchase or install border security technologies.
Ducey put the cost of using containers to fill the gap at Yuma at about $6 million. But more recent figures place the actual total for the full project closer to $13 million.
The action drew praise from local officials who said the flow of migrants through the gaps in the fence was overwhelming local resources.
“The Yuma community does not have the infrastructure to handle thousands of people crossing the border in need of food, shelter and medical services,” Yuma Mayor Doug Nicholls said when Ducey announced his plans in August.
Other uses for Border Security Fund dollars include $20 million for a state match for a new Cochise County jail, $30 million for a new State Emergency Operations Center, and more than $53 million for compensation for sheriff’s deputies.
-30-
On Twitter: @azcapmedia