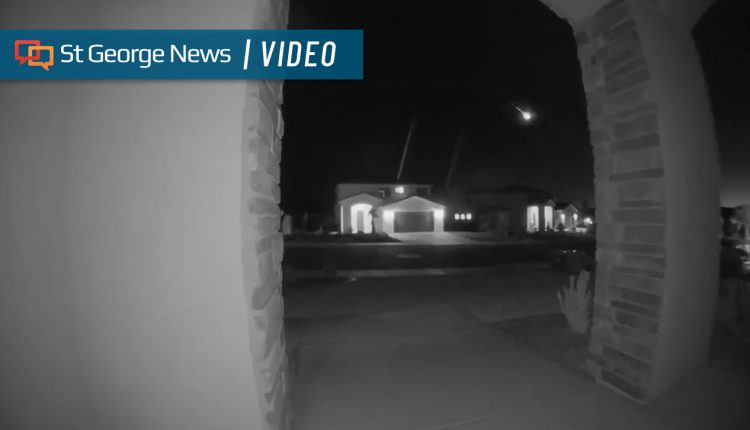 An image from a video from a doorbell camera shows a meteor over Hurricane, Utah, Oct. 25, 2022 | Photo via video courtesy of Sandy Lynne, St George News

A fireball lit up the sky throughout the region from Cedar City to Mesquite at 7:53 pm MDT on Monday night. Captured on some doorbell cameras, the meteor could be seen brightening and seemingly breaking up enough that many on social media reported thinking that the meteorite remnants must have landed in Milford.

Or Hurricane. Or Bloomington. Or Mesquite.

But sightings weren’t limited to Southern Utah. On social media, people in Peoria, Arizona, Las Vegas and Rancho Mirage, California, also were certain that some extra-terrestrial piece had landed in their neighborhood.

Phil Plait, known as “The Bad Astronomer” for his books and media appearances on the Discovery and National Geographic channels, told St. George News it’s not likely any part of the meteoroid ever hit the ground and that it was around the size of one of the basketballs shot up by the Utah Jazz Monday night.

“I personally can’t measure how big the meteoroid was from the videos or the reports, but judging from the brightness it wasn’t too big … less than a meter across for sure. Basketball may be about right,” Plait said. “At that size, it would be rare to get meteorites hitting the ground. Most likely it completely burned up.”

As of Tuesday afternoon, the American Meteor Society had received 125 individual reports from Utah, Arizona, Nevada and California of the meteor sighting on its Fireball reporting page. The report furthest north was from Nona, Utah, just south of Provo; the furthest south was Tucson, Arizona; and the furthest west was Calabasas, California, in the Los Angeles area where it was reported as having a “green glow” and “lots of flames.”

The reports locally ranged from “very large and bright enough to light up the area outside” in Beaver to “having an audible noise” at Dixie and Sunset in St. George to a person in Mesquite wondering if it was a firework. 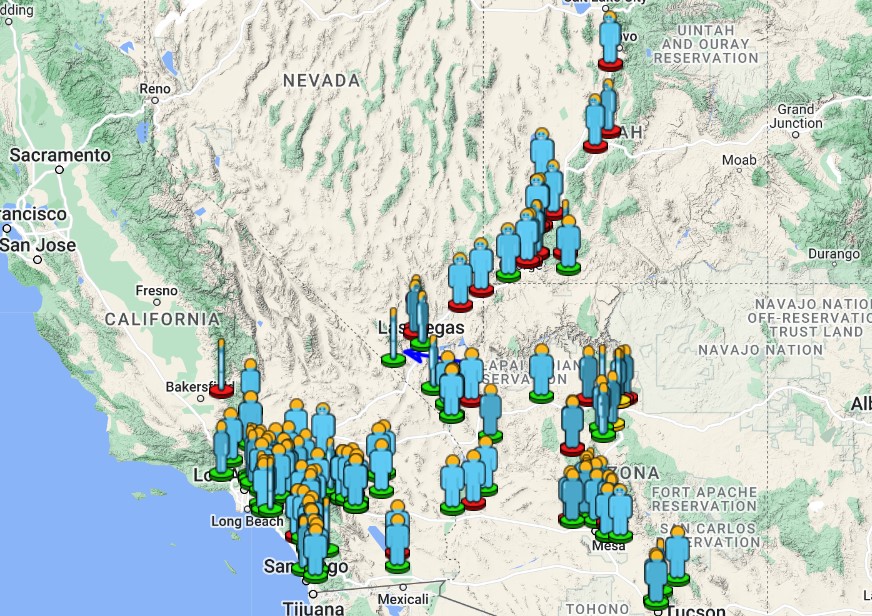 Map shows all of the reported sightings of a meteor on Oct. 24, 2022 | Map courtesy of American Meteor Society, St George News | Click to enlarge

“Wish we could have seen it with our own eyes,” Lynne said.

In the video, the meteor can be seen from the porch, growing in brightness as it descends and illuminates the street like a bolt of lightning. It hits its maximum brightness before it seems to break up.

And Plait said breaking up is exactly what happened.

“Several videos show it suddenly increasing in brightness several times for a short fraction of a second,” said Plait, who wrote a piece on the process called “pancaking.” “Those are likely from the main piece breaking apart due to the pressure of it ramming through our atmosphere. This flattens the incoming rock.

“That causes it to break into smaller pieces, and the sudden increase in surface area due to there now being multiple pieces makes it brighten very rapidly. If you watch video of the Chelyabinsk asteroid from 2013you can see the same thing though this one was much smaller.”

During the annual Orionid meteor shower reached its peak over the weekend, Plait doesn’t think the Monday night meteor was related to that shower, which is made up of debris from Halley’s Comet.

“I doubt this was an Orionid because those tend to be small,” Plait said, noting Orionids are usually no bigger than the size of a pebble.

And there’s no reason to panic that fireballs are about to become alarmingly prolific.

“There’s very roughly 100 tons of meteoric debris that burns up in our atmosphere every day,” Plait said.

American Meteor Society astronomer Robert Lunsford, author of the book “Meteors and How to Observe Them,” told St. George News the fireball occurred too early to be an Orionid but was possibly a part of a different meteor stream.

“It was more likely a member of the Taurid meteor shower, which is expected to produce an increased number of fireballs over the next two weeks,” Lunsford said. “Some call it a ‘swarm’ but it is really a concentration of larger than normal particles from Comet Encke that has been perturbed by the gravity of Jupiter.

“This perturbation causes this concentration to approach the Earth every three or seven years. The last Taurid swarm was in 2015.”

“Reaching land is just an optical illusion as these fireballs disintegrate while still many miles high in the atmosphere,” he said. “Being made of comet material, they are fragile and do not survive their plunge through the atmosphere.”

Chris Reed serves as an editor and reporter for St George News. He has steadily moved east after growing up among the Valley girls of Southern California’s San Fernando Valley. He graduated from Cal State Northridge before spending a decade in Las Vegas. As a sports reporter and editor, he once compared shoe sizes with Shaq. As a news reporter and editor, he has covered parades, triumphs and tragedies. He also once got close to the stars doing publicity for a space module builder. He came to St George for love and has grown to love the community. He is the proud father of two boys, his youngest a champion against both autism and type 1 diabetes.