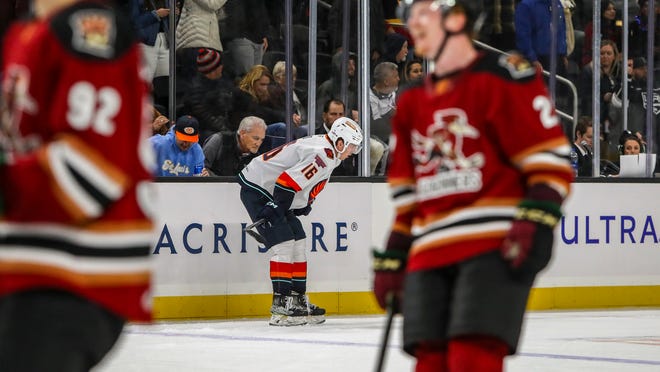 The second Coachella Valley Firebirds game at Acrisure Arena was much more about hockey and much less about pageantry.

Gone on Tuesday night were the flame-throwing theatrics during player introductions that were the signature moment of Sunday’s debut performance. Fewer big wigs and dignitaries were on hand. The crowd, which totaled about 70% capacity, was loud and spirited. But the atmosphere wasn’t quite as super-charged.

The other thing missing on this night was a Firebirds win. Tucson scored a back-breaking goal with 1.2 seconds left in the second period to take a 3-2 lead and that’s the way it ended as the Roadrunners earned the one-goal win.

Kole Lind and Andrew Poturalski had the Firebirds’ goals, but it was the special teams ― the power play and penalty kill ― that let them down in this one.

Coachella Valley is one of the top power play units in the entire American Hockey League, and had three such goals in Sunday’s Acrisure opener, but the Firebirds were a dismal 0-for-8 on the power play on Tuesday, including a long 5- on-3 advantage in the second period that did not produce a goal.

Conversely, the Roadrunners’ three goals all came on the power play, including that costly one in the final seconds of the second period.

“Yeah power play and penalty kill in a large part was the story of the game,” said Firebirds coach Dan Bylsma. “Our penalty kill did a great job in Game 1 here and it’s a good power play. They have a top scorer, (Michael Carcone) in particular, and we put a lot of pressure on them Sunday and forced them to make plays they didn ‘t want to make. Tonight that pressure that they can put on beat us.”

Despite the power play shortcomings, when Poturalski took a slick cross-ice pass from Peetro Seppala and ripped it past the goalkeeper to tie the game at 2-2 midway through the second period, it looked like momentum had shifted to the Firebirds.

But then that game-changing goal happened. Poturalski committed a penalty and went to the box with 5.1 seconds left in the period. On the ensuing faceoff, Carcone, who had scored the Roadrunners first goal and leads the AHL in points scored, ripped a one-timer off of a designed play after a faceoff win and got it past Firebirds goalkeeper Joey Daccord for what proved to be the game winner.

“We needed to leave that period 2-2, that was a bit of a dagger,” Bylsma said.

One thing Tuesday night’s crowd got to see that Sunday night’s didn’t was the first good old-fashioned hockey fight at Acrisure Arena, which was met with a roar of approval.

Late in the first period, a dangerous kneeing penalty by Tucson’s Hudson Elyniuk drew the ire of the Firebirds, and Carsen Twarynski jumped in and shoved Elyniuk. The Firebirds’ Eddie Wittchow and Tucson’s Travis Barron then got involved in the scuffle. The quartet shoved and wrestled and slammed each other into the boards as gloves and sticks were abandoned on the ice. It never devolved into punches being thrown, but it provided a good 30 seconds of entertainment.

“We’ve played this team now this is the sixth time tonight and we’ve had a few physical games with them and they brought a little more physicality and a little more juice tonight and that was right from the start of the game,” Bylsma said.

Tuesday’s game was much more of an end-to-end offensive showcase. The two teams combined for 67 shots on goal as the Roadrunners had 34 and the Firebirds 33. Sunday’s game had only 50 total shots on goal. Kudos to both netminders — Coachella Valley’s Joey Daccord and Tucson’s Ivan Prosvetov — for keeping the score so low.

Even with the loss, Bylsma was still glowing in his review of Acrisure Arena, and he was happy with the size of the crowd for the second game.

“It’s an awesome building, it’s a great place, at an NHL caliber rink,” he said. “You saw it on opening night on Sunday packed to the rafters but it was a pleasant surprise to see another what 7,000 or so (official attendance was 6,487) fans. It makes it an electric place to play.”

1-0 Tuscon: Michael Carcone of the Roadrunners scored the first goal of the night, finding himself all alone on the power play as the puck cycled around. Carcone is a problem for everyone the Roadrunners’ face. In fact, he entered the night leading the entier AHL with 36 points and his two goals and one assist are only going to add to that total.

1-1: The Firebirds trailed for only nine seconds as Kole Lind answered right back, taking a pass from Peetro Seppala off the restart and whistling one into the top left of the goal to quickly tie the game at 1-1. Lind punctuated his goal by flapping his wings, a move then mimicked by many in the crowd. Perhaps it’s the start of a goal-scoring tradition for Lind.

2-1 Tucson: Another power-play goal for the Roadrunners. A shot in on Daccord was loose in front of the net and as players hacked away at it, Tucson’s Laurent Dauphin snuck it into the net.

2-2: The most beautiful goal of the night was a beauty by Andrew Poturalski, his seventh of the year. He was sent out into the open by a gorgeous cross-ice pass by Peetro Seppala and hit a laser shot past the Roadrunners’ goalkeeper from the faceoff circle. Twarynski also had an assist on the play.

3-2 Tucson: This one hurts. Poturalski took a penalty with 5.1 seconds left in the period and it seemed like the Roadrunners would start the third period with a long power play, but instead, they were able to fire one past Joey Daccord right off the restart with 1.2 seconds left. It was Carcone again with the goal, his 15th of the year.

Firebirds player of the night

Peter Seppala: The 22-year-old defenseman from Finland had assists on both Firebirds goals. The one on the second goal was particularly impressive, as he sent a cross-ice pass through several sticks and bodies right to the tape of Poturalski who cashed it in.

Freeride: Starting defenseman Brogan Rafferty wasn’t the only Rafferty on the ice Tuesday night. As the Zamboni smoothed the ice before the puck was dropped during the pre-game activity, Brogan’s grandfather hitched a ride, sitting in the sidecar and waving to the crowd while RJ Schultz, the team’s ice plant manager, was the pilot. His credential tag said “Grandpa Raff” on it.

May the fours be with you: The biggest surprise was that the Firebirds didn’t score four goals, in their previous five games against the Roadrunners the scores were 4-1, 4-3, 4-3, 4-3 (all wins by the Firebirds) and one 7 -2 losses. Alas, four goals would’ve been quite useful in this one.

Tuesday night: The Firebirds hit the road on Thursday to play in Henderson, Nevada against the Silver Knights (affiliate of the Las Vegas Golden Knights) at 7 pm Then on Friday they return to Acrisure Arena to host the Silver Knights for a 7 pm game. Friday’s game will include a Teddy Bear toss. Bring a teddy bear or two and throw them on the ice when the Firebirds score their first goal. They will be collected and given to families in need.

Shad Powers is a sports columnist for The Desert Sun. Have a question about the Firebirds or Acrisure Arena? Shoot him to e-mail at [email protected]

The Case of the Two Grace Elliotts: A Medical Billing Mystery

Her Credit Was Ruined by Medical Debt. She’s Been Turned Away From Doctors, Jobs, and Loans