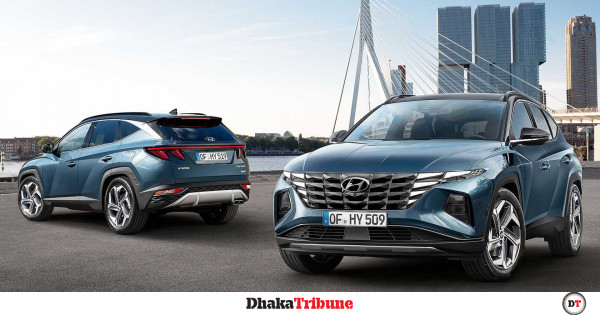 First debuted in 2004, the Tucson has come a long way

The new Tucson, according to Hyundai, represents “a design revolution” for the company, and they weren’t joking. It will stand out in this highly crowded market. It will undoubtedly catch your attention, whether you appreciate the appearance of its Parametric Hidden Lights or not.

The Tucson debuted in 2004 on a quirky-looking vehicle that prioritized value over all other considerations. A large portion of Hyundai’s engineering staff was previously employed by BMW and I believe that in comparison to their previous workplace, their new one is more successful at producing bold design concepts.

Daytime running lights in the front end have a very clever integration that makes them incredibly interesting to look at. They appear to vanish into the wide grille.

In profile, the metalwork may astound you. You might not be overly surprised to find that the same person who managed the design of this car also created some of the most recognizable, triangulated Lamborghini models.

The two lower grade versions do not come standard with LED headlights, and the yellow lights greatly devalue the appearance.

With a striking light strip over the tailgate, the back end almost resembles a Mustang (or a Kia Sorento), but it has its own style. But once more, it’s not great that the lowest grades don’t have basic LED lighting.

Given that Tucson hybrid powertrains worldwide are powered by its new turbocharged 1.6-liter inline-four cylinder engine, the Tucson 1.6 T-GDi model gives some solace.

The 1.6-liter direct-injected engine delivers power with agility when moving. It spins smoothly. From low revs, where Hyundai claims peak thrust occurs as early as 1500 rpm, it builds torque convincingly. But in reality, it seems strong at 2500 rpm.

Moreover, the Continuously Variable Valve Duration, or CVVD, technology is the big news. To maintain valves open for as long as necessary, it mechanically slows or quickens the intake cam’s lobe in relation to shaft speed. A little bit more power and less thirst are the two advantages.

The Tucson’s handling is adequate but not particularly outstanding; it is not sporty. The steering is well-balanced, the body roll is well-managed, and the Tucson generally makes confident direction changes. It also has a highly polished and smooth ride, and all but the worst bumps are well absorbed by the suspension. I believe that crossover customers will find this lack of inclination toward either the sporty or ‘floaty’ ends of the handling spectrum to be desirable.

In the stylish cabin of the Tucson, passengers are treated to well-built surroundings with accessible controls and a European-styled design. In spite of the all-black color scheme being quite monotone, choosing beige upholstery gives some contrast. Hyundai advertises that the fabric is stain-, odor-, and static-resistant and is given as standard on the seating by YES Essentials.

The Limited and Ultimate models include leather as standard equipment for those who like it. With the back seats folded flat, the Tucson can accommodate heavy luggage; otherwise, it can fit seven adults.

Standard features include a full-featured infotainment system with a 7.0-inch touchscreen, Apple CarPlay, and Android Auto. An 8.0-inch touchscreen and in-dash navigation are both included in the Limited and Ultimate trim levels.

The Tucson should be at the top of your list of potential test-drive candidates if a comfortable ride and interior are your priorities in a compact SUV. It comfortably compares to the top cars in its class and dominates the competition.

It suppresses dips and seams without disturbing the passengers and handles road irregularities remarkably effectively.

The 2021 Tucson was previously sold for Tk46 to Tk48 lakh, but now the current market price is a hefty Tk63 to Tk65 lakh due to the devaluation of the Taka against the Dollar. At least that’s how the sellers are justifying the sharp rise in price.