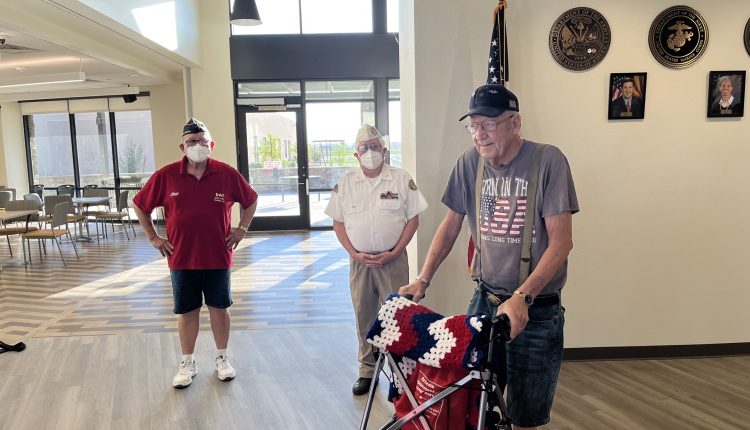 YUMA, Ariz. (KECY, KYMA) – Applause rang out as Major Lloyd Summers walked into his new home for the first time.

Medical staff and local veterans were there to welcome the Vietnam veteran who says moving into this new home will greatly benefit him and his daughter.

Major Lloyd Summers checks in to the Veteran Home Yuma

“I don’t want my daughter to have to check in on me every day. I was living by myself and she feels like she has to check on me. Here somebody else will be doing that,” Summers said.

Major Summers says he doesn’t know how he became the first resident but is happy this facility was put in Yuma.

“I saw it get built over the summer and figured it would be a pretty good place for me,” Summers said.

A pretty good place, complete with a physical fitness room, a courtyard and even a movie theater.

All of which veteran Richard Perez says is well deserved and even overdue.

“Twice I’ve told him welcome home. It’s a saying Vietnam veterans have for each other. Because no one welcomed them home when they came back from Vietnam,” Perez said.

Something Chop Rodriguez knows himself as a Vietnam veteran.

He says it was an honor to be there for Major Summers on this day and present him with a blanket.

“Helping another Vietnam veteran. That’s what I enjoyed most,” Rodriguez said.

This facility has 80 beds to care for local veterans.

All veterans are eligible to live in this facility with Arizona residents getting first priority.

Cost varies on coverage, and you can contact the Arizona Department of Veterans Services with any questions on eligibility and cost

Sister Wives Season 17 Is a Triumph of Documentary Filmmaking