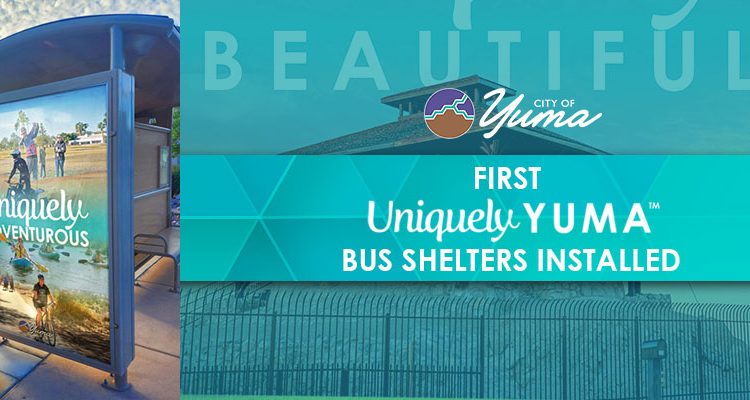 The City of Yuma, the City’s Clean and Beautiful Commission, and Yuma County Area Transit (YCAT) unveiled new bus shelters today that aim to provide riders reprieve from the weather while also serving to promote Yuma in an attractive manner.

The new shelters were installed on both sides of 24th Street east of 8th Avenue, and feature a poster reflecting the City’s new “Uniquely Yuma” campaign that debuted on the City of Yuma Government Facebook page.

The City’s Public Works Department worked with YCAT to install and enhance the shelters.

“We saw an opportunity for partnerships here,” explained Public Works Director Joel Olea. “We met with YCAT to determine their needs and involved the Clean and Beautiful Commission, whose mission is to improve community aesthetics, with an eye toward fulfilling the City Council’s strategic outcome of reflecting Yuma as an ‘active and appealing’ community.”

This led to putting the right people together in order to adhere to requirements needed for the first bus shelter installations, to the right-of-way permits required for install, and to finding an existing contract for a vendor to handle the installation. The Clean and Beautiful Commission proposed a “beautification” angle to the shelters, leading to the inclusion of the Uniquely Yuma theme and poster, which was created by the City’s Communications team.

At this first installed location, the City is also providing landscaping and dust control improvements to two corner, City-owned lots.

Friday’s ribbon cutting could lead to additional bus shelters going up across town. “The key was getting YCAT and Quail Construction together,” Olea said. “We have the right people together now. We have an active contract and a successful process in place now.”