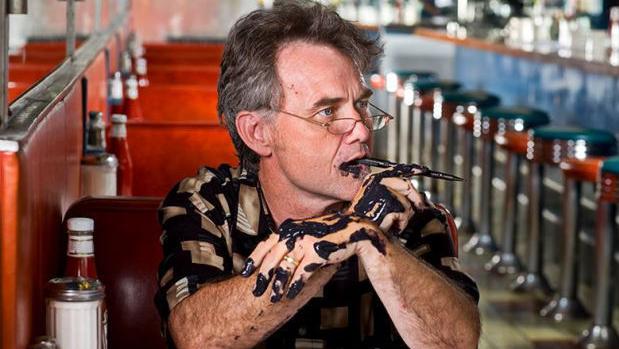 The following column is the opinion and analysis of the writer:

I was enjoying riding my bike on a beautiful Friday afternoon when the next thing I knew I was on my back in an ambulance.

I must’ve hit a patch of irony.

The next morning I was getting inducted into the University of Arizona Journalism School’s Hall of Fame and my speech was written and the reward of a short ride was in order. Helmet on, I stuck to neighborhoods, avoiding major streets until I made an exception and pedaled out onto Oracle and headed south on a bike lane that was a clearly marked construction zone.

The safe residential street was yards away when, in an instant, the next thing I knew I was in an ambulance, with 20 minutes of my life missing. I’d misjudged the path, kissed the asphalt, and suffered a minor concussion. After eight hours of scans, tests, patchwork and a dollop of morphine I was released back into the wild.

The next day I found my guardian angel. Alicia Mitchell was the first Samaritan to stop for this old fool lying on the asphalt, like Wile E. Coyote after a canyon drop, next to his bike, bells and stars circling his head.

She said it was easy to estimate my age because my babbling was peppered with words like “far out” and “groovy.”

Alicia then handed me an orange “Arizona Turf King” T-shirt and told me Joey Lomeli, part of a work crew that had stopped to help, had given me the shirt off his back, rolling it into a pillow to support my head until the EMTs came.

Al Pesqueira, a retired firefighting chingon, stopped to help. As sent me a shoutout selfie to prove he was there, alongside Alicia.

So many Samaritans, so many blessings.

The next day I was admitted into the Journalism Hall of Fame along with my esteemed fellow inductees. Warning my peers my remarks were written under the influence of morphine, I noted I never thought of myself as a journalist, just a very lucky cartoonist occasionally mistaken for a journalist. This perhaps explains the death threats I got over the years, including a car bomb threat which inspired a joke I wore out at civic group luncheons about giving my then-teenage daughter, Sarah, a buck to start my car in the mornings.

When I said I was syndicated to over 700 newspapers I added that was an amazing feat considering there are only 500 newspapers left in the world.

I then listed the cartoonists I’d known who’d paid a much higher price than I ever had while serving in the free press.

In 2019, I nervously attended an international cartoonist gathering in Paris, after learning my cartoon of Muhammad was my most widely reprinted cartoon. At a related gathering, in the tiny village of St. Just le Martel, where the world’s greatest cartoonist is named and awarded a cow, I met my good friend, Jordanian cartoonist Emad Hajjaj. Neither of us won the cow. Today, back home, Emad is facing prison for his cartoons.

At another international gathering of cartoonists in Mexico City I hung out with the amazing cartoonist Pedro Molina. He ended up exiled from his beloved Nicaragua.

Then there’s the Syrian cartoonist, Ali Farazat. In one tweet we see him hospitalized, his hands in casts, crushed by thugs serving the anti-democratic monster Assad. Days later Ali tweeted his sketched response to those who would silence him, his hands in their casts, held upright, with a pair of middle fingers poking out of both casts defiantly addressing the enemies of democracy. Well said brother.

Last year Garry Trudeau told me, “You and I are lucky — we’re legacy acts who get to turn out the lights as we retire. I tell talented young artists to head for Pixar or switch to graphic novels. Every art form has its day, and ours is almost over. But like stained glass windows, we had a pretty good run.”

Once, when I complained to my friend Emad that I never won a Pulitzer, he laughed, telling me, “Be proud. A fatwa is better than a Pulitzer.”

Today I’m proud. Because my prized plaque from the J-School is better than a Pulitzer, a Fatwa, and a french cow combined. And a humbling surprise because I never thought of myself as a journalist — just the luckiest cartoonist I know. As long as I keep my bike helmet on.

Newly constructed houses you can buy in Flagstaff | Local