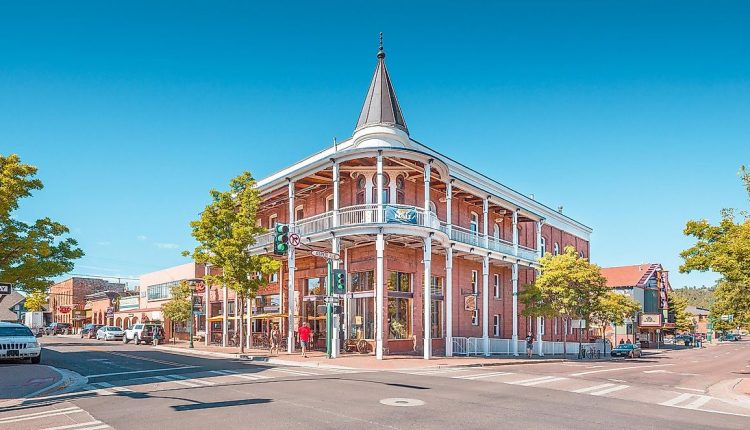 The gateway to the world-famous Grand Canyon is the city of Flagstaff, Arizona. Motorists can cruise down the well-loved Route 66 and observe heritage buildings and original neon signs. Navajo Indigenous Reserve, the largest in the US, is minutes from the city limits. The base camp of the tallest mountain in Arizona and the wintry Snowbowl ski resort. An outstanding balance between warm and cool temperatures creates the perfect year-round climate for comfortable living.

A Meadow Near Flagstaff, Arizona

Positioned in the center of northern Arizona, Flagstaff’s elevation is 2,135 meters. Historic Route 66 that stretched from Chicago to Los Angeles passed through the inner city in its glory days. Following Highway 89 north for 229 kilometers lies the state line between Utah and Arizona. Located an hour and a half east is the striking Petrified Forest National Park. Arizona’s state capital, Phoenix, is 233 kilometers from the center, moving south of the city through the Coconino National Forest. Three hundred twelve kilometers west in the Mohave Valley, the Colorado River intertwines between Arizona, California, and Nevada.

Home to the largest contiguous ponderosa pine forest globally, Flagstaff has a diverse landscape of ecosystems and climates. Harsh tundra, green alpine, high desert, and pinon-juniper studded plateaus are the environments found in the area. Summer is the wettest season, with August receiving the most rainfall. July is the warmest month where temperatures can reach around 31˚C. By late autumn, the daily highs average 8˚C and lows of -6˚C. January is the snowiest month, with almost 30 centimeters of snow accumulating. The first couple of weeks of the year brings the coldest temperatures to the region; the chilliest it can get in Flagstaff is -15˚C. There are typically two hundred sixty-six sunny days per year, and the high altitude puts locals and travelers at risk of sun exposure. 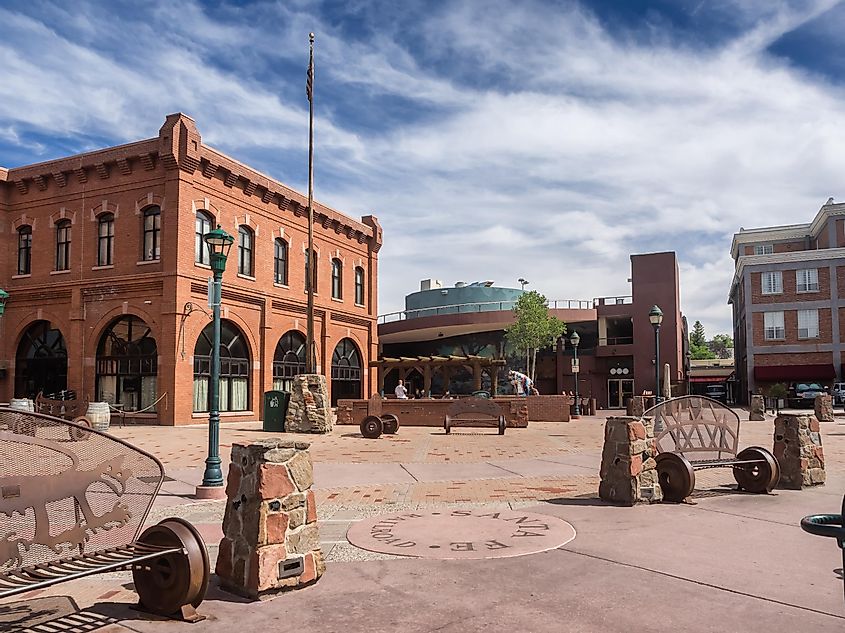 The Main Square in Flagstaff, Arizona

Sinagua and Anasazi tribes cohabited in the territory for well over 800 years, and evidence of their past lies within the nearby National Monuments. The town’s name came from a ceremonial flag-raising on July 4th, 1876. A group of voyageurs from Boston pruned a giant pine tree and raised the United States flag to the top of the tree. Years later, the arrival of the western railway made it appealing to traders and business people. By the 1880s, the new settlement flourished from the railroad, lumber, and livestock industries. With the railroad still bustling through the city, nearly 100 trains bypass each day. The main campus of Northern Arizona University opened in 1899 in the heart of Flagstaff. In recent days, the protected indigenous land covers almost 50,000 km2, and Navajo, Hopi, Kaibab-Paiute, and Hualapai tribes occupy the surrounding land from the township. 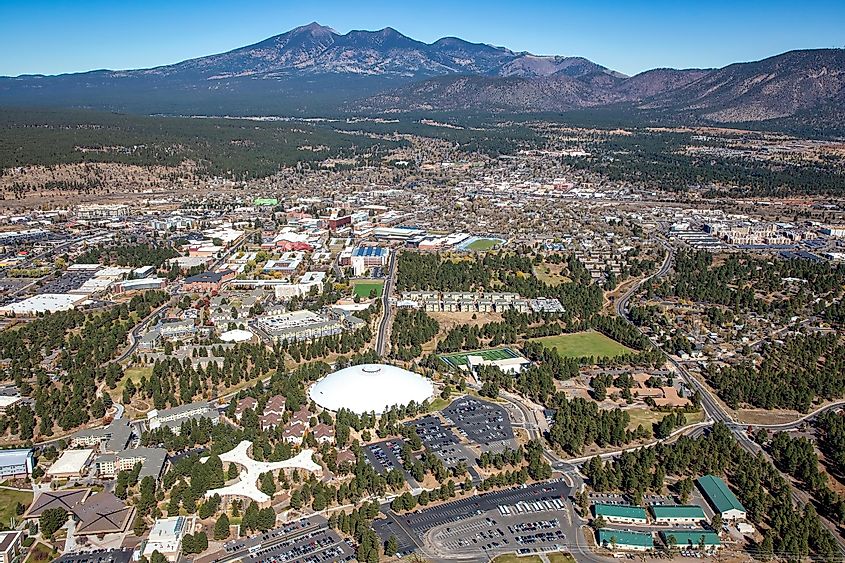 A Skyview of Flagstaff, Arizona

The seat of Coconino County houses approximately 78,989 residents, and the population has increased by 10,000 people in the past ten years. The ethnic groups include 63% Caucasian, 19% Hispanic, 8% Indigenous, 3% Asian, and 2% African American. An ordinary household income is roughly $59,000, and a detached home costs over $350,000. 25.2 years old is the average age, and the monthly rent is nearly $1,300. The industries that employ the most people are educational, hospitality, food, and health care services. Almost 38,000 citizens are actively working, but the city’s unemployment rate is 5.9%. 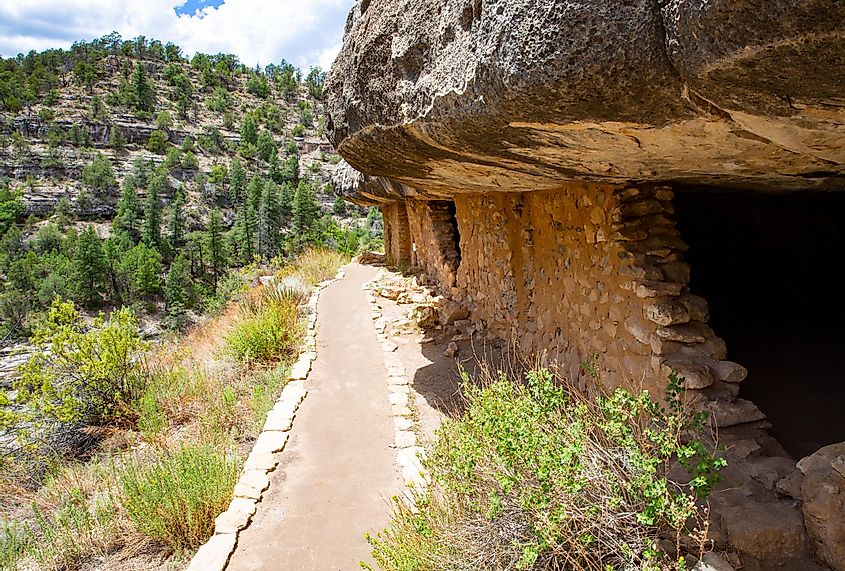 Remnants of the Indigenous tribe Sinagua are still visible to this day. The tribes lived in the valley but had to flee the area due to volcanic activity. Thanks to the park’s conservation, visitors can experience how the ancient tribe lived through caves and cliffs. A 183-meter-deep canyon was carved out of the land by Walnut Creek. Today the stream flows into the Colorado River and eventually through the Grand Canyon. 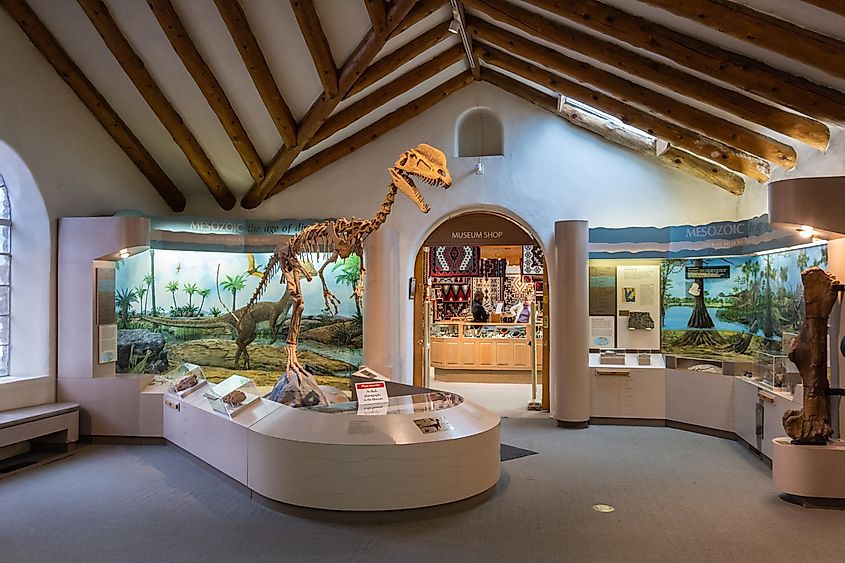 A Dinosaur Skeleton in the Museum of Northern Arizona

The museum was founded in 1928 by a group of Flagstaffers who decided to protect the history of northern Arizona for future generations. The preservation of over five million ancient artifacts native to the area is accessible to the public. The exhibits inside the facility consist of historical records, art, anthropology, biology, geology, paleontology, and a library. Current discoveries help the museum create and cycle through new and old artifacts to display.

Established in 1894 on the northwestern hillside of the city, a critical observatory houses five large telescopes. In February 1930, the discovery of the ninth planet in our solar system, Pluto, occurred at the viewpoint. Other instruments surveyed the moon to help the Apollo Missions. Another telescope examines asteroids, comets, and the activity of the Sun. The grounds are open for visitors to witness these fantastic ground-breaking technology and devices that help experts see into space.