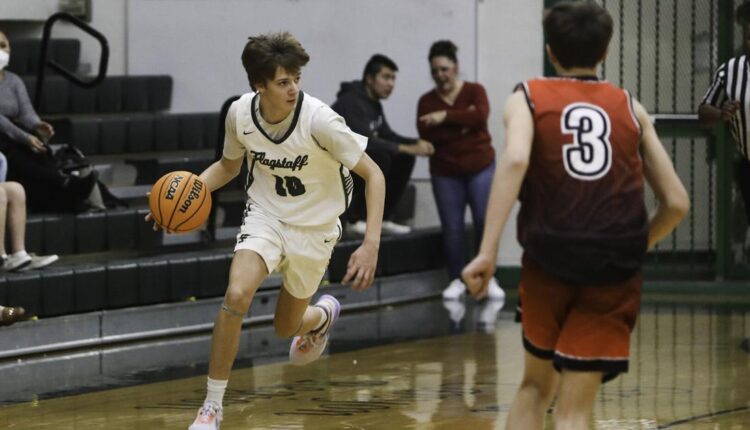 Without two starters in junior Jake Centner, who was away for a family event, and senior Richard Garcia, who was out with an injured leg, the hosting Eagles (1-5, 0-1 Grand Canyon) had trouble scoring consistently against the volunteers , who are now on a four-game win streak.

The Eagles hit eight 3-pointers total, including four from junior Connor O’Brien-Piubeni, who led the Eagles with 16 points. While a few went in, Eagles coach Nick Walton said his team needed to attack the paint more.

“We were just settling too much, and maybe just a little bit rattled. If you’re shooting from deep and not hitting those shots, you’ve got to give a different option. And I don’t think we did a great job of being aggressive on the inside, being able to score that way,” he said.


Despite the loss, Walton was impressed with O’Brien-Piubeni’s effort, especially as he was a bit hobbled with an injured ankle. The Eagles also put together an impressive defensive effort, limiting the Volunteers from the perimeter and using their quickness to disrupt drives to the basket.

The Eagles gave up a few second-chance points to Lee Williams freshman post player Devan Chrisition that ruined a few great defensive possessions that ended in misses, but overall were solid defensively.

“When you hold a team under 50, you’re right there. In a game like that you just have to capitalize on the other end,” Walton said.

Flagstaff’s scoring troubles started early. The Eagles and Volunteers both struggled to put points on the board in the first quarter. O’Brien-Piubeni and senior Ben Janecek hit 3s late in the quarter, and the score was tied at 6-6 with just 2:31 to play in the period. Senior Shaydon Begay added a layup with 32 seconds to play, and the Eagles led 11-10 at the end of the quarter.

Lee Williams switched his defense to a zone from there, limiting the Eagles even more, with Christ playing well in the post to attack drivers.

The volunteers started the period with a 7-0 run to take a lead. O’Brien-Piubeni hit a pair of late 3s to close the gap a bit, but the Eagles trailed 21-19 at halftime.

“We were getting great ball movement, I thought that was fantastic. I thought it got where we needed to, except for getting it inside,” Walton said.


A pair of Lee Williams free throws gave the Volunteers a 34-33 lead it would never lose. The Eagles cut the deficit to 38-36 later on, but that would be as close as they would get, as Lee Williams went on a 6-0 burst from there.

The Volunteers played solid defense and hit the necessary free throws to stave off a late run.

Despite his team’s record to start the season, Walton said Flagstaff has a chance to salvage the season.

“I have all the faith in our team, full confidence. We’re still just trying to figure things out. We’ve got a whole different rotation, a whole different lineup from last year that are trying to get into the new roles, and we’re just making the adjustment. They’re battling,” Walton said.


Be the first to know

Wreaths Across America held into two places in Yuma