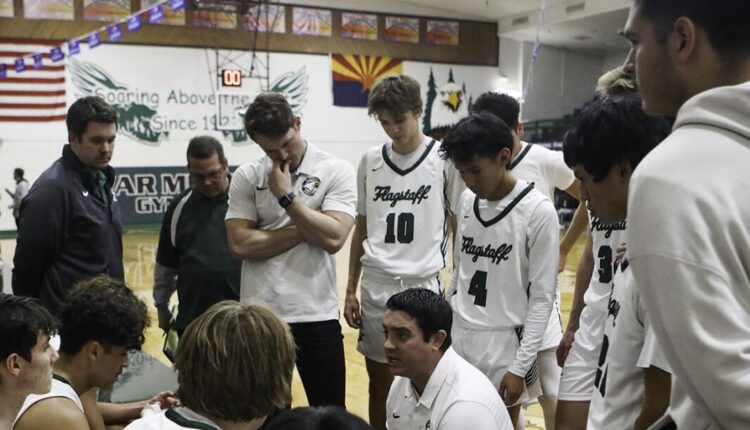 In its first home game of the new year, the no. 33 Flagstaff Eagles boys basketball team earned its first Grand Canyon Region win of the season by taking down the Mohave Thunderbirds, 60-37, Thursday at War Memorial Gymnasium.

Eagles coach Nick Walton was thrilled with the way his defense limited Mohave down the stretch. The 4A Conference Eagles improved to 2-6 on the season, with a 1-1 mark in region play.

“I loved that we held them to under 40 points,” Walton said. “I think one of our biggest problems has been turnovers and that was one thing we talked about early on. It gave us a chance, too, if we struggled on the offensive end to stay in it. So I think that was huge for us.”

From the opening tip, the Eagles showed they had the size and stamina to outpace the visitors. The win snapped a four-game losing streak against a slew of tough opponents.

“We play our schedule for a reason,” Walton said. “We’ve had a really tough schedule, played a lot of good teams, so I think any win is going to help us. There’s teams that you got to take care of business against, this being one of them. It’s early. As long as we can take care of business we’ll be where we need to be.”

A boost came for the Eagles in the second quarter came in the form of senior center Richard Garcia, who made his first appearance in a handful of games since suffering a lower leg injury earlier in the season. Garcia came off the bench and was on a minutes restriction, but his impact was made apparent early when the 6-foot-3 post hauled in a rebound on his very first possession.

When Garcia scored his one basket of the game, the crowd roared in support of his return to the floor.

“He’s a captain,” Walton said. “Somebody like that, that’s been in the program for four years, everybody was excited to see him come back. I think that helped feed our energy. The moment he hit the floor I felt like our intensity picked up. He’s on minutes restrictions and he didn’t look like he normally does but just having him step in is awesome to see.”

The Eagles had three scorers in double figures as well. On top of sophomore Harrison Fritsch’s quick start that culminated in 12 points, junior guards Connor O’Brien-Piubeni and Jake Centner led Flagstaff with 14 points each.

[End 3rd Quarter] Flagstaff 41 – Mohave 27The Eagles grew their lead in the 3rd quarter largely thanks to Connor O’brien-puibeni, who is up to 11 points now.The Eagles held Kingzten Bristol contained to just 2 points in the quarter. He went cold from deep in the quarter. pic.twitter.com/Ozt5ZbDKSl

“We have different guys that can step up at any given moment,” Walton said. “You always love to have the distribution of the basketball. We have certain guys that typically get hot normally, but it’s nice that other guys step up when we’re missing shots. That was awesome.”

The Eagles jumped to an early lead that never dwindled on the shoulders of Fritsch, who single-handedly matched Mohave’s six points in the first quarter to give the Eagles a 10-6 lead after the first period.

The Thunderbirds offense ran almost entirely through sophomore guard Kingzten Bristol. The team captain scored Mohave’s first two baskets and led all scorers with 15 points. The Eagles found a way to limit him early by drawing two fouls and keeping him on the bench much of the half.

[HALFTIME] Flagstaff 27 – Mohave 17Jerome Key had a nice put-back before the buzzer to give the Eagles a double-digit lead at the half. Fritsch leads Flagstaff with 10 points. Kingzten Bristol, Mohave’s team captain, also has 10 points. 6 came on two long 3’s in the Q2. pic.twitter.com/Hfm1MW4f0i

Still, Bristol showed his range in the second quarter, draining two long 3-pointers to reach 10 points by halftime. He went cold after that, settling for more long 3s and being held to five points the rest of the game.

“We thought we had an advantage if we could force him to shoot from the outside, and I thought we did a pretty good job early on,” Walton said. “He started to make some shots, so we went to man coverage and kind of put a little more pressure on him. He’s a good player. He’ll be tough to deal with for a few years.”

Flagstaff kept up the lead and ended with 10 different scorers and salted away the win thanks to a couple steals and layups from senior guard Shaydon Begay.

[FINAL] Flagstaff 60 – Mohave 37 Shaydon Begay had a few nice layups on steals to salt the game away. Flagstaff had 10 different scorers to Mohave’s 6. pic.twitter.com/mJPjUbZBNj

The Eagles will be back at it with three games next week, starting with the No. 28 Mingus Union Marauders on the road on Monday.