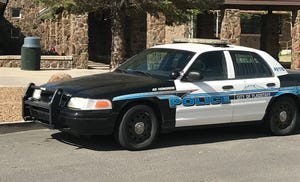 Deputy Chief Scott Mansfield will assume the role as interim police chief throughout Musselman’s leave, the duration of which has not been publicly disclosed.

In early July, an ABC15 investigation revealed that while working on a joint operation between Flagstaff police and Homeland Security Investigations, two Flagstaff police officers working undercover got fully naked and allowed themselves to be fondled by the sex trafficking victims they were supposed to be saving on at least five different occasions each.

Despite state law clearly outlining that this activity was illegal, the practices used were approved by Homeland Security agents, Coconino County prosecutors and Flagstaff police.

Employing these tactics during this operation “was not at the behest internally of the Flagstaff police,” Flagstaff Mayor Paul Deasy told The Arizona Republic.

While the Flagstaff City Council does not have administrative control over the Police Department, council members are working on strategies to address the situation on their end, Deasy said.

“We are looking into and going to have a meeting in the near future regarding policies that we can enact that are best practices,” Deasy said, including potentially updating city code and licensing requirements.

“These are the better practices that we’re looking into from a policy level to ensure that this situation does not happen again,” he said.

Sarah Langley, spokesperson for Flagstaff, said the city is arranging for an “outside consultant” to review the Police Department’s undercover operation.

“The purpose of the review is to determine what policies and methodologies could be used, as best practices, in future operations should they occur. The review is not being conducted as an investigation of individual officers involved in this particular operation. Flagstaff Police Chief Dan Musselman has been placed on temporary leave. This is a non-disciplinary action taken at the direction of the City Manager,” Langley wrote in an email to The Republic.

Langley would not say whether the officers involved in the operation were placed on leave, citing a Flagstaff policy not to comment on personnel matters.

In his initial response to ABC15’s findings, Musselman doubled down on the actions taken by his officers, stating that they did not violate state law because the officers did not sexually touch the massage therapist, but rather they were the ones who were touched.

Musselman went even further, reportedly claiming, “Quite the opposite happened, the subject fondled Officer Eberhardt thereby making him the victim of Sexual Abuse under 13-1404.”

Deasy first became aware of the operation and the tactics used as well as the later decision to put Musselman on leave when it was reported by news media, “which does speak to a continued lack of transparency to this day,” he said.

Weeks ago, Deasy requested records related to this event from the county and he has yet to receive any, he said, but he is expecting to get redacted police reports in the near future.

“I believe that the characterization that this was necessary is inaccurate given how other municipalities and counties have been able to address these situations,” Deasy said. “And we need to be implementing these best practices because in my mind this was not a necessary way to investigate.”

The Flagstaff City Manager’s Office, Musselman, Mansfield and the police union did not respond to multiple requests for comment.