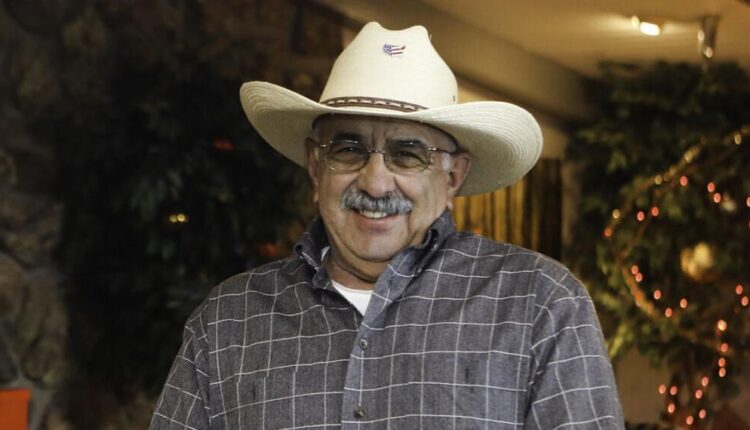 Flagstaff Citizen of the Year Bobby Goitia speaks on volunteerism

For Flagstaff Citizen of the Year Bobby Goitia, Flagstaff in pronunciation with family.

His family first arrived in Flagstaff via his grandfather, who emigrated from the Basque region of Spain in 1918. His grandparents had eight children, most of which stayed in Flagstaff, including Goitia’s father. Goitia himself was born in Flagstaff in 1952 — he turned 70 this year — and has spent the last seven decades living, working and raising his family here.

“I couldn’t be more proud to say that my family’s been here over 100 years,” Goitia said. “It’s great to have roots that deep.”

“Countless organizations in Flagstaff and northern Arizona have reaped the benefits of having this dedicated, passionate volunteer for many, many years,” wrote Molly and Gene Munger in a statement nominating Goitia for the Citizen of the Year Award. “Now is the time to recognize Bobby Goitia as a 2022 Arizona Daily Sun Citizen of the Year — ‘a lifetime of achievements’ who has worked with and made such a difference to our citizens of all ages.”

Goitia’s community involvement in Flagstaff amounts to a lengthy list that normally would be too broad to print. But in the interest of celebrating Goitia, we’ll take the ink to account his contributions fully:

Goitia has spent 46 years as a chief hunter education instructor with the Arizona Game and Fish Department (AZGFD) while also volunteering at the Ben Avery Shooting Facility and Northern Arizona University shooting range, 37 years with the Flagstaff Elks Club, 20 years with the Knights of Columbus (where he coordinated many pancake breakfast fundraisers), 20 years as an archery instructor and demonstrator at Flagstaff High School, and Camp Colton, 16 years in the Flagstaff Rotary Club, 12 years in the St. Pius parish council, 10 years as a volunteer coach for Flagstaff City Women’s Softball, three years in Lion’s club.

In his spare time, he also served as president of Flagstaff Archers, spent several years volunteering as a catering coordinator for the Special Olympics, organized events for the NAU Newman Center, founded the “Fishing for Funds” tournaments that have provided over $300,000 to families in need, served many years as a Flagstaff Chamber of Commerce Ambassador, and currently sits on the Continental Country Club HOA as president.

“I’ll tell you why I got so involved in so many different things,” Goitia said. “It was the perfect opportunity to meet a lot of new people, expand my horizons and learn a whole bunch of different things from different people.”

As should be evident, Goitia is a big believer in the power of a network.

“It’s very beneficial to know a lot of people,” he said. “And boy, one way to do it is to get out there and do stuff, volunteer in the community.”

The benefit of volunteerism goes two ways, Goitia said. He has had the joy of seeing how his efforts have had a directly positive impact on the people around him. One shining example can be found in the Fishing For Funds tournament, which Goitia originally founded as a charity benefit event memorializing Lamar Haynes, a friend and fellow outdoorsman, who died in his late 50s. After about 10 years, and at the request of Haynes’ family, the tournament evolved to celebrate living members of the community, all the while continuing to raise funds for various causes and families in need.

“That was probably one of the most heartwarming and heart-tugging things that I was involved in,” Goitia said, adding that between the joy of the celebrants and the gratitude of charity recipients, the fishing tournament left few eyes dry.

And in the other direction, Goitia has also had the joy of seeing his community show up for him when he was in need. That was certainly the case several years back when his wife was diagnosed with early-onset Alzheimer’s. At the time, Goitia left his work so that he could become a full-time caregiver.

“You would not believe the overwhelming support that I’ve gotten from so many people,” he said. “I don’t know how many people have my contact listed in their phone — hundreds — and I would feel comfortable calling any one of those people at two or three o’clock in the morning, if I needed anything or if I just needed to talk.”

“That’s the huge benefit of all the acquaintances I’ve made in the 70 years I’ve been here,” Goitia added.

But the benefits of such community involvement do not come without their costs. For Goitia, that expense has been on his time, especially when his commitments overlapped.

“There were times I was thinking, ‘How am I doing this?'” he said. “I’ve got this going on at six o’clock, I’ve got that going on at seven. How am I going to make this work? And you know, sometimes you just make it work.”

Goitia said he has no regrets about leading such a busy life — particularly because as he rushed from one thing to another, he also made sure to keep his schedule open for what truly mattered.

“I found the time without neglecting my wife and my kids,” he said. “A lot of times, they were there right alongside with me.”

Involving his family in his active community life has been one of the secrets of his success, Goitia said. Whether it was his daughters attending his archery courses, or his wife helping him at volunteer events, keeping family close made sure that Goitia was cementing his most important relationships, even while building new ones.

As his children were growing up, Goitia found himself in a “nonstop household.”

There, they would spend every Sunday — weather permitting — to catch their breath and enjoy each other’s company until the week resumed. It was a straightforward relaxation ritual, but an important one to Goitia.

“The girls to this day just remember things like that,” he said.

When asked what advice he might pass on to others in the Flagstaff community, Goitia encouraged a view of community involvement that looked beyond one’s immediate circle.

“What I can’t understand was the dad that would become the Little League coach until his kid was out of Little League, and then he’d disappear,” Goitia said. “There’s other kids behind there that need that person.”

He added: “You can’t be a revolving door. When you do get involved in an organization, stick with it a little longer than just two or three years. Don’t always assume that there’s going to be somebody behind you to take your place.”

For Goitia, being acknowledged as Citizen of the Year is “huge.” His volunteering has always been a labor of love more than a pursuit of recognition, he said, but that doesn’t mean the recognition doesn’t feel good.

“I’ve been pretty fortunate,” he said. “I found a great girl that I married, we had two great kids.”

“I think the avenues that I took, reaching out and meeting a lot of people definitely helped,” he added. “I’ve put a foot in every state. Arizona is a tough one to beat. And Flagstaff has been a pretty good town.”