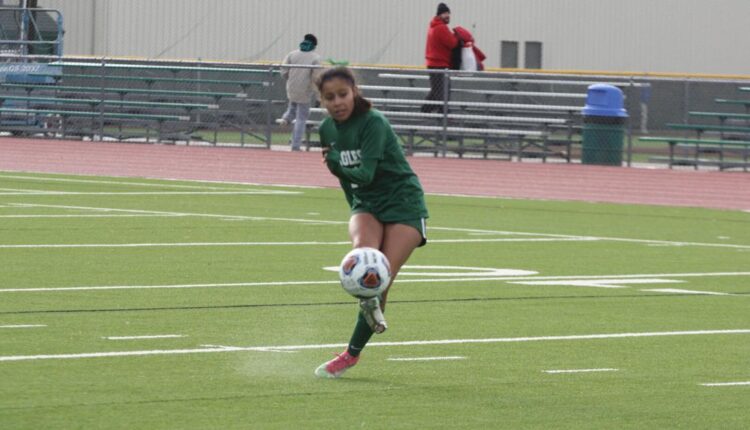 Freezing rain, and then full-on snow, poured all over Flagstaff’s field Wednesday. So, similarly, did goals from the Eagles, who won their girls soccer home opener, 8-0, over the stumbling Dysart Demons.

Flagstaff (3-0) dominated possession from the opening minutes of the 4A Conference match and kept up the pressure until the final whistle blew. Senior Ciara Garcia scored her third goal of the match in the 64th minute, ending the contest via mercy rule.

She said the Eagles’ scoring was encouraging at an early part of the 2022-23 campaign, despite it coming against a Dysart team that is now 0-3 and has given up 19 goals across three shutout losses.

“It’s our third game of the season, so we’re just trying to get into it right now. But we were super offensive today,” she said.

Flagstaff knocked the ball around, even as the wind and snow picked up late. The Eagles allowed their midfielders to make precise passes to running attackers who were able to find space to score.

“I want to play a pretty game, and I know these girls are capable of it. So the biggest thing for me is that I don’t care about the elements, we’re going to find a way to play possession, and we did that today,” Eagles coach Savannah Berry said.

Sophomore Nataly Arangure scored in the second and fourth minute, with both goals coming on assists from senior Keira Robertson. Garcia added a pair, and senior Taylor West knocked one home to give the Eagles a 5-0 lead just seven minutes into play.

In the eighth minute, Flagstaff subbed nearly the entire midfield and offensive players, putting in a second unit that kept up the pressure on the Demons. Junior Maya Evans scored in the 15th minute, and junior Katherine Bouck slotted one home in the 27th to give the Eagles a 7-0 lead at halftime.

Flagstaff’s production from its second unit proved that the depth of the Eagles could be a weapon moving forward in the season.

“It’s really nice to not be stressed. I have so much confidence in these girls because they’ve put in the work to earn that,” Berry said. “The biggest thing is how interchangeable the squad is, and how much flexibility that gives us. We did a full-team sub, and part of that was that now’s the time to try things and see how the girls compete.”


Needing just one more goal to complete the win via mercy rule, Garcia got on the end of a through ball, and easily passed Dysart’s goalkeeper for the winner in the right corner of the net with 16:14 still left on the clock.

She said the win, Flagstaff’s 17th straight in the regular season dating back to 2021, felt good to open the home slate of this year.

“It was pretty big. We’re trying to keep our winning streak like last year,” Garcia said.

This year’s Eagles roster boosts 12 seniors, Many of them contributed on the team that won the 2020 state championship. Wednesday’s match was the first step, Garcia said, in a long journey she hopes leads back to another trophy.

“We’re basically all seniors, so we’re hoping to get a championship before we all leave,” she said.