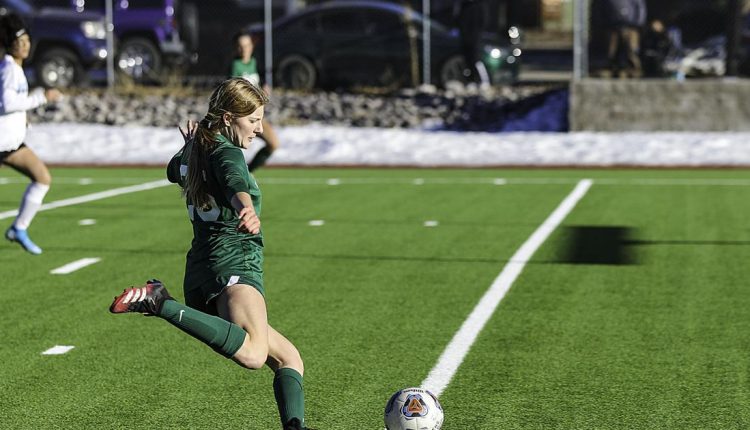 Flagstaff Girls Soccer continued its unbeaten start to the 2021-22 regular season with an 8-0 win by mercy over Deer Valley at home on Friday.

Five different players scored for the No. 3 Eagles (7-0, 0-0 Grand Canyon), and Flagstaff dominated the No. 34 Skyhawks down the line.

The Eagles, an experienced group with many returning players, have scored with ease this year. In January’s three games, Flagstaff have outplayed their opponents 20-1 on aggregate, supported by crosses from their solid midfielders and wings and strong finishers from forwards.

“I think we’ve made pretty good progress. It was difficult with COVID and everything because we didn’t have our full team roster so we had to adapt every game to the person we had. But I think we adjusted really well and still found ways to put the ball in the net,” said junior Keira Robertson, who scored two goals and had two assists against the Skyhawks.

Flagstaff controlled the tempo and the ball early on. The Eagles swiped the ball around midfield and the speedy forwards made clever runs in front of the net.

In the seventh minute, Robertson scored the first goal from a cross. Five minutes later, she delivered a corner to junior Audrey Hutton, who effortlessly headed the ball home. Then, in the 21st minute, Robertson ran down a long ball and passed to Kate Bouck, who gave the Eagles a 3-0 lead as a sophomore. Things went well for Flagstaff, who played their set pieces and scored a goal despite Deer Valley playing an extremely defensive formation.

“I think we’re going to score most of our goals this year by finding wide players and playing crosses. But especially against a team like this, where the buses are parked in front of the goal, we have to spread the ball and find our wings to get a good service into the penalty area,” said Robertson.

Then, about 25 minutes later, the Eagles replaced most of their offensive players. Sophomore Davy Mokelke was one of the newcomers, creating chances with instant speed down the right wing even without the starters on the pitch. She scored in the 36th minute and had a shot in the 40th that rebounded at junior Ciara Garcia, who scored seconds from the end at half-time.

“Usually I start on the bench and then Coach puts pace on the wings to surprise the other team,” said Mokelke. “We usually start fast, but sometimes we need to switch things up and speed things up so we can take advantage of it.”

Flagstaff’s depth is an additional weapon this season.

“Our bench is really deep, and when they come in, they bring a whole new aspect to the game that raises the level,” Robertson said.

Deer Valley lasted almost 20 minutes in the second half. Flagstaff had several shots on target but couldn’t convert.

But in the 59th minute, Mokelke scored her second goal after a through ball. Garcia scored just a minute later to increase the Eagles’ lead to 7-0.

The Eagles saw an early finish line on a cold, windy day if they could score again. Finally, with 5:31 left, Robertson ended the game with a shot to the right corner of the net. It secured victory.

“Having that record and showing that we can beat a team 8-0 is nice, but I think we can do better than that,” said Robertson.

The Eagles will begin regional play next, with six back-to-back Grand Canyon competitions ahead of the playoffs. Ranked 3rd in the current 4A Conference rankings, the Eagles have a chance to contend for a high seed and potentially make a deep playoff run.

Mokelke said the team is still figuring out his identity. But after their fourth win under the mercy rule and fifth shutout in seven games, the Eagles look set to be on their way to another special end of the year.

“We’re trying our best to figure out where everyone’s on the ball, running and how everyone is playing together, but it’s been a pretty strong season so far,” said Mokelke. “And we want to continue that and finish strong.”

Flagstaff will visit Mingus Union No. 31 on Tuesday.

Yuma’s Art in the Park Festival is this weekend