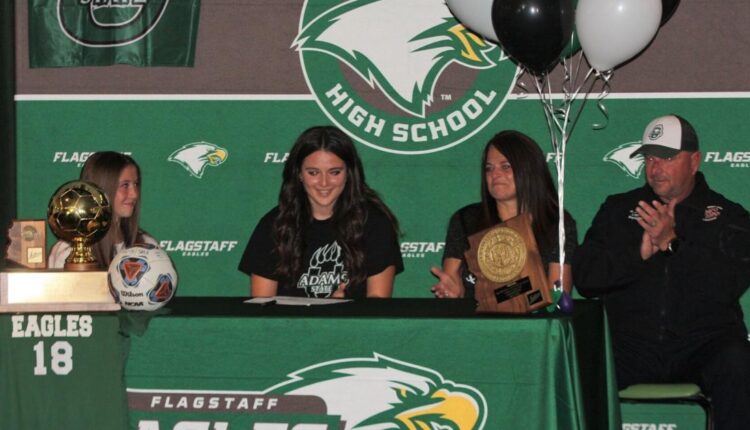 For the second time this week, a Flagstaff girls senior soccer player has committed to playing at Adams State University next year.

Flagstaff senior Bailee Jamison is signing her letter to play soccer at Adams State today. Second signing to the Grizzlies this week pic.twitter.com/B3wNrqPYVz

Jamison said there were several factors that made her choose Adams State.

“It’s very much like Flagstaff. It’s got that small-town atmosphere like home. And the fact that we already have one of our girls, and then (Keira) going there makes the transition easier,” she said. “The coach really wanted us, and the team was really sweet. And I just liked the whole atmosphere they provide. And when I went on that visit, there was just the feeling that it felt right for me.”

Jamison is a skilled defensive midfielder for the Eagles who is known by teammates for her physical play that allowed her to succeed at a young age. She was a freshman and key contributor on the Flagstaff team that won the state championship in 2020.

While always a solid player, the Eagles coaching staff said they have seen a change in the way Jamison carries herself. That started with the 2020 season.

“The team was very young at a certain point. And there were games, and playoff games that, quite frankly, we maybe shouldn’t have won. We were just so young, and just didn’t know better,” Eagles assistant coach Chris Barquin said. “It’s been fun to see the progression from being a young soccer player just out there having fun, with maybe no real goal in sight, to maybe the last year or so taking it very seriously.”

Eagles coach Savannah Berry said Jamison was the lone player to attend every optional workout this summer. The senior’s dedication has led to her becoming an even better player and a more important member of the team.

“The transformation from last year to where we’re at today is probably one of the quicker transitions I’ve seen. And it’s been special to watch,” Berry said.

Flagstaff’s Bailee Jamison (18) fights for possession of the ball during a home soccer match in February.


Jamison started playing soccer at age 4. Around grade school, she decided that what she wanted to dedicate herself to — which led to success on the field in traveling soccer and eventually at the varsity level.

The game was just something she enjoyed for several years. Though talented, she wasn’t sure about her future as a player. However, when she got a message back from the Grizzlies expressing interest, she fully committed to attempting to compete at the next level.

“When I finally got that email back, I kind of realized that I really want to do this,” Jamison said.

Now with the signing out of the way, Jamison is focused on success in her final season with the Eagles. Flagstaff is 3-0 to start the year, and is set to compete for another championship come the end of the 2022-23 campaign.

“It’s a weight off my shoulders. There’s no stress, so I can just have fun playing soccer and don’t worry about it. I’m excited,” Jamison said.

The Eagles will play in the 2022 Arizona Soccer Showcase beginning Dec. 27 at Mesa.