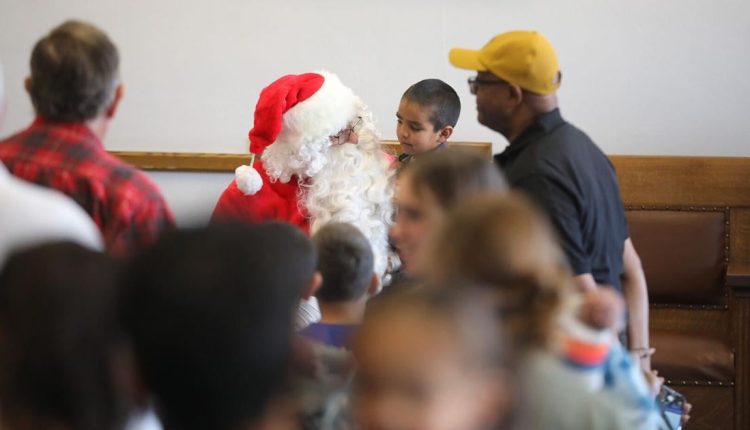 On Saturday, the spirit of giving was alive and well during the annual Clothe-a-Child event hosted by Flagstaff’s Masonic Lodge No. 7. In partnership with a handful of local organizations and businesses, the lodge used donated funds to provide 40 children from the Flagstaff community with new clothes, a hot meal and even a visit from Santa.

“It was just absolutely amazing,” said John Graham, who has spearheaded the program for the past 21 years — though he noted that some form of the event has been in Flagstaff for at least 60 years.

The day started at Flagstaff lodge around 7:30 am, where the 40 children between the ages of 5 and 10 met lodge members and student volunteers form Flagstaff High School for breakfast, arts and crafts and games. From there, the children and their chaperones were shuttled on buses donated by Groome Transportation to the local Kohl’s, where they were provided with $100 each to shop for new clothes and shoes. Afterwards, it was back to the lodge for lunch and a visit from Santa before being picked up by their parents just after noon.


Children listen to a Christmas story Saturday afternoon at the Flagstaff Masonic Lodge No. 7 before a surprise visit from Santa. Members of the lodge and local businesses took 40 children in need to buy clothes, and then the children had a party at the lodge during the annual Clothe-A-Child event.


“It’s pretty structured,” Graham said. “We couldn’t do it without all the good help and the volunteers.”

All told, the event is built on about $7,000 worth of donations, Graham said, mostly direct contributions from local lodge members and other regional freemasons. This year the lodge also raised funds by raffling off toolboxes donated by NAPA Auto Parts.

“They were a blessing to work with,” Graham said.

The event was also made possible through collaboration with school nurses and counselors at Marshall, Killip, and Puente de Hozho elementary schools — which helped select 25 children who could best benefit from the Clothe-A-Child event. This year, the lodge also invited 15 children from families within Flagstaff’s Teenage Parent Program (TAPP).

“Choosing which students will participate in the event is really a collaborative effort at Marshall,” said school nurse Elizabeth Walmer. “Our front office staff have frequent contact with families and are likely to know when a family is in a situation where they could use a little holiday assistance. Sometimes I become aware in my interactions with parents. Anyone in the school can suggest a child for the program though, and we really try to include those kids who can benefit the most.”

Walmer added that the kids involved usually get “very excited” about the program.

“They look forward to spending the morning shopping and picking out their own new clothes,” she said. “It’s a really fun and festive day for them.”

Rory Olsen, 5, reads a book that was in a bag of gifts he received from a visit with Santa Saturday morning at the Flagstaff Masonic Lodge No. 7 during the annual Clothe-A-Child event.

The event can also be quite emotional for the parents involved, Graham said. He recalled a tearful interaction with a mother in TAPP who participated in the program after recently moving into an apartment. High housing costs had forced her family to live in the forest for the three months prior.

“There is such a need in Flagstaff,” Graham said. “And that’s why we do it. We love giving back.”

But the Clothe-A-Child event is not just about the children and families it benefits. It’s also about bettering the men of the Masonic Lodge.

“We’re a fraternity of making good men better,” Graham said. In his view, being a “good man” is indivisible from being a community servant and a positive male role model to children — a value that has also motivated other lodge programs such as their Bikes For Books reading incentive.

But for some men, being a good role model for children, can push them out of their comfort zone, Graham said. He relayed an observation he made during this year’s Clothe-A-Child event, wherein a lodge member who was initially nervous about interacting with the kids eventually got down on the floor and joined in with the games and crafts.

“I saw a different side of that man,” Graham said. “He just opened up.”

Already, Graham is looking forward to next year’s Clothe-A-Child.

“This is one thing I can do every year that makes me feel good,” he said.

Mylene Ramirez, 5, plays with her hair as she tells Santa what she would like for Christmas Saturday morning during an event at the Flagstaff Masonic Lodge No. 7.


Sean Golightly can be reached at [email protected]