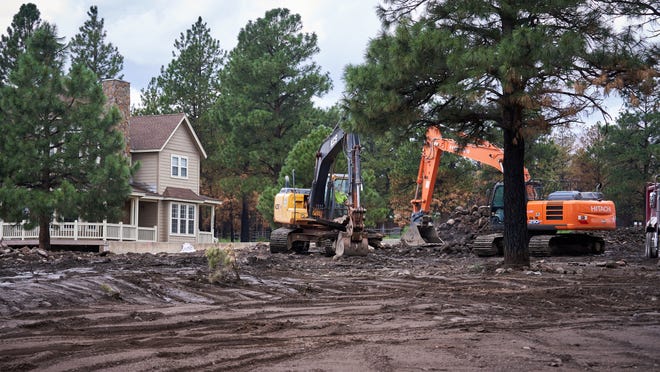 As flash flooding continued throughout much of northern Arizona, Flagstaff Mayor Paul Deasy officially declared a state of emergency Wednesday in connection with post-wildfire flooding around the Pipeline Fire burn area.

“The emergency declaration helps us to access resources that we need and gives us opportunities to apply for federal grants that we’re needing,” Deasy said as he helped with mitigation efforts near the flood areas.

With a state of emergency declaration, Flagstaff can now receive additional resources for disaster response including funding assistance for costs associated with damage, recovery and restoration after flood events.

“We’re spending, as you might expect, a considerable amount of money on operational costs with this as well as we are going to need quite a sum of money as well to be able to create long term mitigation measures,” he said. “That’s really the crux of this: we need resources.”

The city itself has spent more than $1 million just in preparation for the storms, Deasy said, and that does not include any of the cost for cleaning up after these flood events.

“We aren’t a big city to be able to pony up all of these funds all of a sudden,” he said.

Just as Deasy issued his emergency declaration, the City of Flagstaff first issued shelter-in-place orders for neighborhoods in the Museum Fire flood area with flash flooding expected as rains continue throughout the day.

The neighborhoods impacted in the initial order include Mt. Elden Estates, Paradise, Grandview and Sunnyside.

“Right now we’re doing okay but please everyone take precautions, pay attention to emergency alerts because anything can change at a moments notice,” Deasy said.

“You are in good hands, we got the right folks out here and everyone is monitoring the situation,” he said.

Shortly after Mayor Deasy’s update, the shelter-in-place order was extended to include the Cheshire, Coconino Estates, Creighton Estates, Coyote Springs, Anasazi Ridge and US Route 180 on the west side of town.

The Schultz Creek watershed nearby overflowed a little before 2 pm, closing US 180 in both directions from Rim Drive north to the Coyote Springs neighborhood for over an hour.

Extensive flood mitigation efforts have continued over the past two weeks throughout the community with more than 5 miles of concrete barriers and around 420,000 sandbags distributed, according to Coconino County Flood Control District administrator Lucinda Andreani.

With storms still to come, Andreani is hoping to fill around 1 million sandbags total, she said Tuesday.

Residents can pick up sandbags at various locations throughout the county including along US 89 at the corner of Campbell Avenue where hundreds of sandbags are waiting and more are delivered everyday.

For longer term mitigation, the city recently received funding to create retention basins north of town that would collect flood waters before they reached nearby residential neighborhoods, Deasy said. The basins will be able to hold approximately 40 acre-feet, or more than 13 million gallons, of flood waters.

“The flood we actually experienced on Saturday would not have existed if we had this in place,” he said.

Deasy said he hopes that these measures will be in place at least on the western side of the Pipeline burn area by the end of the year, he said.

With a more permanent fix months away, the area is still bracing for the rest of what has been a very active monsoon season so far.

“We’re hoping for the best but expecting the worst,” Deasy said.

Coconino County officials offered the following tips online and advised residents to be prepared for the approaching storms and potential flooding threat. They further recommended that residents sign up for emergency alerts and remember to be in READY status for potential emergencies.