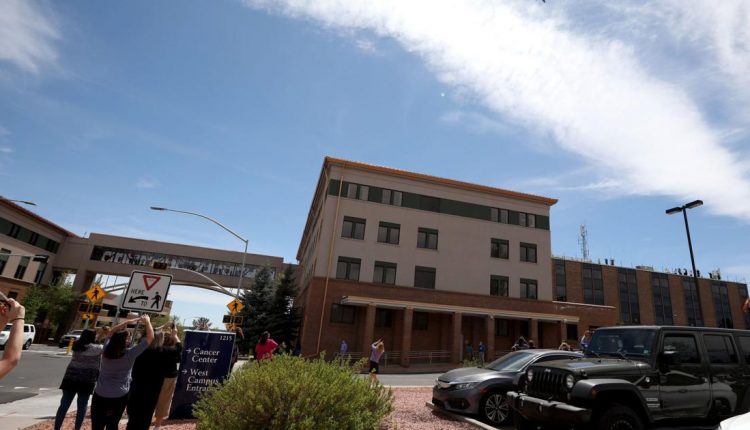 Northern Arizona Healthcare’s (NAH) plan for the new Flagstaff Medical Center (FMC) campus, first announced last spring, is currently under review by the City of Flagstaff, and one hospitalist who works in the current building says the move is “the right thing to do.”

The Community Development Division, according to the city’s website, has accepted development review applications for the hospital’s relocation, including a request to rezone the property from rural residential to a mix of highway commercial and research and development as well as a minor amendment to revise the activity center identified in the city’s 2030 regional plan.

A specific plan to guide rezoning and create development standards is also under review and can be found online.

“The NAH project requires approval of a concept plan, zoning map amendment (rezone) with a Specific Plan, subdivision plat and site plan,” the city’s planning director, Michelle McNulty, wrote in an email. “The concept plan has been approved with conditions that will be required to be addressed at a Site Plan review.”

Items she said were currently under review are the zoning map amendment, specific plan applications, and impact analyzes on traffic, water, sewer and fire.

“Several rounds of comments on the Traffic Impact Analysis have gone back and forth between the applicant and the Traffic Section, and we anticipate having a final approval soon,” she said. “Approval of these analyzes will inform the Developmental Agreement required for the zoning map amendment.”

The 60-day agency review of the plan began on June 3, according to the city’s website, and will close Aug. 2.

Steve Eiss, NAH’s vice president of construction and real estate development, said the organization as of July 13 was waiting for approval from city staff before moving forward in the process.

If approved, NAH plans to host another public meeting, followed by two city zoning meetings. The next steps after that will be two Flagstaff City Council meetings.

McNulty added that the three required public meetings (two with the Planning and Zoning Commission) are the next step in the process, followed by a public meeting with the Flagstaff City Council. While the dates have not yet been set, she said the zoning meetings are expected to be in September or October, “with a targeted city council meeting date in November.”

Hospitalist and transfer center medical director Kathryn Feuquay said the new campus is the “the best proactive and future healthcare answer for Flagstaff and for northern Arizona.”

In the nine years Feuquay has worked at FMC, she said, she’s seen the information technology and construction teams continue to retrofit the building to keep up with advancing technology and that they are running out of space.

“We’re reaching the point that even those efforts to retrofit and update are limited by the space, and to go further would require impacting our ability to deliver care to the same number of patients every day,” she said.

The current hospital was originally built in 1936 and the surgical tower, its most recent addition, was completed in 2003. It has been retrofitted and updated several times in the decades since, and Feuquay said the new building could be expected to have at least a similar lifespan.

As she put it, the new hospital would start out “in our current state-of-the-art technological phase,” with “shelf space to accommodate additional future advancements.”

One of the biggest changes to the current Feuquay campus has seen is the switch from paper charting to computer workspaces.

“Just since I’ve been here, we’ve had to try to create more physician workstations in rooms where someone just used to have a little desk and write in a chart. Now we need computers. There is not enough space. It’s frequent that a physician or one of our advanced practice providers might have to go from one ward to another to another to find a place. Our new building, that’s going to be already planned out proactively,” she said, adding that the nurse workspaces have changed in a similar way.

She added: “We have obviously over the past decades retrofitted our current FMC to accommodate all of that, but it’s reaching its lifespan. It’s difficult to continue to retrofit without closing down patient care areas; we don’t have the luxury of empty space anywhere to accommodate that.”

She noted that FMC as it is still provides “state-of-the-art, up-to-date medical care,” even as it is outgrowing its current building.

“What we’re talking about is building a building that better accommodates that state-of-the-art medical care that we plan to continue to evolve, continue to provide,” she said.

The idea for the new hospital is to have “a building that matches the care we’re giving our patients, and a quieter space, a more private space,” Feuquay said.

“When it comes down to it, we’re building this building for our future, for our patients — our current patients as well as our future patients. So everything going in the village, everything from a walking-distance place for a family to stay to a couch for the family in the room and privacy, that’s what we want to see.”

Plans for the new building include 20% more emergency room beds than the current hospital, with a dedicated observation unit, which Feuquay says should help reduce wait times and increase the number of patients they are able to care for.

FMC currently has 240 patient beds, a number that includes the NICU and psychiatric ward — which have a limited set of uses.

The new location will contain 270 patient beds, Feuquay said, with space put into the design for at least 40 more, should need continue to expand.

Feuquay said she’s most excited about the plans for the new single-occupancy patient rooms.

Four of the current hospital’s medical surgical telemetry wards have private patient rooms, while another four have shared rooms, with two beds and their respective supplies separated by a curtain and sharing a bathroom. Switching to private rooms only in this building would mean the hospital would be able to serve fewer patients.

The new building would both be larger and use space more efficiently, she said.

The plan is to have only private patient rooms, with their own bathrooms (including a shower), a pullout couch for family members and windows.

“We chose to live here in Flagstaff and northern Arizona because it’s beautiful. The environment’s very important to us, and having that connection to an outside world when you’re sick, when you’re in the hospital, is very important,” she said, mentioning benefits to mental health, circadian rhythms and prevention of hospital- acquired delirium. “… Every patient having their own room, their own bathroom, their own space for family and friends to visit, their own window is a big deal. I spend a lot of time in patient rooms because I’m a hospitalist, so I’m in and out of 17, 18 patient rooms a day, and to me, personally, this is the thing I’m most excited about.”

Each of the patient rooms will also be ICU capable so that they shift to function as ICU beds if needed, allowing them to accommodate care needs, such as high-flow nasal cannula oxygen, without moving patients. It also means the hospital’s ICU capacity can increase when needed should there be another situation like the COVID-19 pandemic, for example.

Other ways Feuquay mentioned the new hospital could improve patient care and help staff be more efficient include the vertical rather than horizontal design — which would mean shorter trips between locations, freight elevators being located in a different area than patients, laundry chutes, and separate patient and public corridors.

The campus surrounding the hospital will have additional resources for branches such as oncology and hyperbaric wound care, and Feuquay says having food, lodging and outdoor spaces within walking distance would add to the experience for both patients and their families.

“It’s going to be more incorporated into the environment and the urban trail, so it’s going to be a big upgrade in the experience for patients and their families,” she said. “We’ll be able to enjoy it, too, because we go there every day.”

Feuquay said she understands the concern that the change of location would mean the hospital is farther away from some parts of the city, as she lives about 10 minutes away from the current building.

Eiss said NAH was in “ongoing conversations” with the city, ADOT and nearby community members about traffic impacts, and that the analysis report shows that traffic on Milton Road and in downtown Flagstaff will be reduced as a result of the change.

“More than 60% of our patient population is regional,” he said. “The new location will help with direct access from the freeway and actually reduce out-of-town traffic from travel through the city to downtown.”

“It’s the right thing to do,” Feuquay said of the move to the new location. “With every decision in medicine, you weigh the pros and the cons, and there has been a lot of years of thought. … I trust our multiple construction experts who have talked to medical staff over the past several years about options of retrofitting the current building versus moving to a new location. We have to weigh the pros and cons, and at the end of the day it’s the right thing for our Flagstaff community, the right thing for our northern Arizona community. What our patients deserve is the right decision and it’s a new building.”

More about the plans for the new campus can be found at nah.com/expansion.

Health Insurance Price Data: It’s Out There, but It’s Not for the Faint of Heart