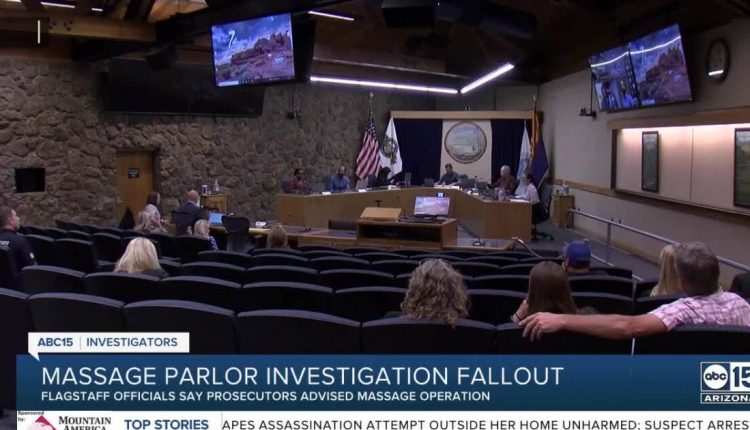 In each business, they documented how they took off their pants and allowed themselves to be fondled, as part of the pre-planned investigation.

“In Arizona, you cannot exchange money for sex acts while on duty. It is a crime,” said Brad Rideout, an Arizona defense attorney and former prosecutor.

Rideout, and many other attorneys, point to state statute 13-1412, which states:

A peace officer commits unlawful sexual conduct by knowingly engaging in sexual contact…with any person who is in the officer’s custody or…the subject of an investigation.

The two officers also stated in their 2019 police reports that the employees inside may be victims of human and sex trafficking. Trafficking experts question why the officers would have gone through with the sex acts if they suspected the women giving the massages were potential victims.

“As soon as I got aroused, that’s when I immediately started asking about the money and how much. And like I said, I’ve never done one of these, so I was fairly nervous and I didn’t know where to stop it. So I was trying to stop it quickly,” said Officer Dustin Eberhardt, in a video deposition for one of the cases.

Flagstaff Mayor Paul Deasy told ABC15 that the department’s police officers did not come up with the evidence-gathering methods on their own.

“That’s where [the officers] were taking their tips on how to approach this,” said Mayor Deasy. “The senior Deputy County Attorney determined that was the method that should be done.”

ABC15 obtained an internal email that the city’s Senior Assistant Attorney sent to other Flagstaff leaders, the day after our initial story aired.

It is unclear what role County Attorney Bill Ring played in the operation, subsequent prosecution, and recent dismissal of at least five cases.

Ring has been the elected Coconino County Attorney since January 2017. So he was in charge when his chief deputy allegedly gave that directive.

“There are certainly many individuals involved that should be held accountable in how this situation was handled,” said Mayor Deasy.

An executive assistant said the county attorney would not comment due to ongoing prosecution. ABC15 then asked for comment about the cases that have already been dismissed, but we did not hear back.

In the weeks that followed the initial report:

– Flagstaff Police Chief Dan Mussleman was put on administrative leave. He returned to work after a three-week absence.

– The city manager hired an outside investigator to review the operation.

– The state’s police oversight board received a complaint.

– And the Mayor called for “transparency”.