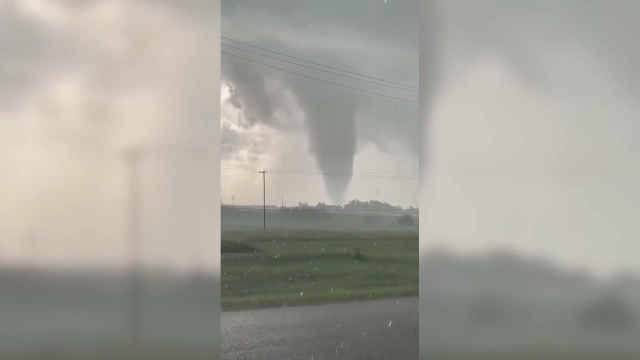 An Alberta Emergency Alert was issued Sunday afternoon for a storm possibly producing a tornado in east central Alberta, including Paintearth County and some surrounding communities.

As of 6:26 pm, all alerts and tornado warnings were ended as the storm’s tornado threat diminished, while large hail, strong wind gusts, and torrental downpours still possible.

“Seek shelter immediately in a basement or reinforced structure,” the alert said. “Get low and put as many walls between yourself and the storm as possible.

“Stay away from windows, doors, and outside walls. If you are on the highway and cannot avoid the tornado, seek shelter in a ditch or ravine.”

A storm capable of producing a tornado moved south through east central Alberta, including near Coronation, Alta. (Source: Amber Buniak).

“This is a dangerous and potentially life-threatening situation,” the warning said. “Take cover immediately, if threatening weather approaches.

“If you hear a roaring sound or see a funnel cloud, swirling debris near the ground, flying debris, or any threatening weather approaching, take shelter immediately.”

According to officials, damaging winds, large hail and intense rainfall are also possible.

Tornado warnings are issued when thunderstorms capable of producing tornadoes and severe weather are happening or are likely to occur.

Initially, tornado warnings were issued for Flagstaff County, specifically for Forestburg and Galahad, at 3:52 pm Those were later expanded to include Paintearth County, near Halkirk and Big Knife Provincial Park, at 4:09 pm, but were dropped by 4: 30 p.m

First issued at 3:52 pm, the alert said the storm was located approximately 20 kilometers northwest of Galahad, Alta., moving southeast at around 30 kilometers per hour.