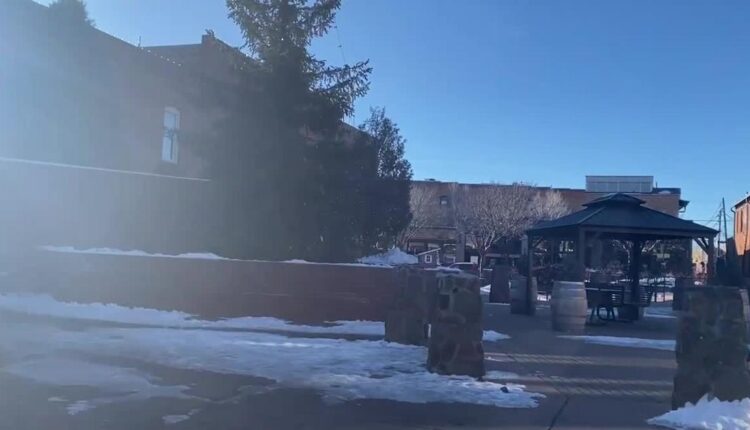 The countdown calendar is up, in neon green and white, hanging just below a massive metal pine cone above the balcony of the Weatherford Hotel in downtown Flagstaff. It’s a symbol of the season — dropping annually to mark the end of one spin around the sun and the beginning of a new year in northern Arizona.

The Great Pine Cone Drop has become a holiday event staple in the region.

“At this year’s event you should look on every street corner and see police officers there. That’s our intention,” said Lt. Collin Seay, a patrol lieutenant with the Flagstaff Police Department. He was promoted to lieutenant in 2020 and took over organizing special events — so he approves permits for parades and festivals.

He’s also been working to plan the police detail and response for this year’s holiday celebration.

When the 6-foot-tall, 70-pound pine cone is dropped downtown for New Year’s, the crowd usually fills the street below. People stand shoulder to shoulder, crowded in to watch the cone — made from a repurposed trash can — take its 10-second journey toward the ground.

Although Seay said the turnout was good last year, he thinks this year he’s anticipating an even that looks a lot more like it did in 2019.

And he’s not the only one.

“Coming out of COVID, people are really looking for experiences,” said Terry Madeksza, the executive director of Downtown Business Alliance. “They’re looking for the winter climate. Flagstaff checks those boxes. We just want to give people reason to celebrate, to come downtown, create some lasting memories.”

Anticipating the comeback crowd, Flagstaff Police Department has been planning public safety strategies for the event for some time.

“We’ve seen national events … active attacker incidents, so we’re taking consideration from those events to have more robust downtown closures rather than just barricades. We have equipment and vehicles that are in and around the downtown area to make it more secure,” Seay said. “We’re working a lot with the fire department and our public works department. We actually we have multiple meetings for these events to talk about where we’re going to place equipment and vehicles to kind of prevent access from a vehicle-type attack. They’ll be a fire engine down here. There’ll be lots of police cars down here. There’ll be a command trailer down here to keep people warm and also serve as a barrier.”

“Typically, the last two weeks of December and the first two weeks in January, from my experience living in Flagstaff, have always been the colder time of the year,” said Seay.

He explained that officers on foot patrol will be keeping an eye out to for people who may need to warm up to avoid health risks.

Foot patrols will also be coupled with holiday DUI enforcement throughout the city.

“New Year’s Eve is notorious for drinking and driving and DUI-related collisions. I would say plan your ride down here and plan your ride out of here if you’re going to consume alcoholic beverages,” Seay said.

He also cautions that icy roads on New Year’s Eve may also be a cause of collisions. Icy roads might even be a concern early in the day.

“If you’re not used to snow operations and snow driving, plan for that. Get a ride,” said Seay

The pine cone was first lifted above the Weatherford Hotel 22 years ago to ring in the new millennium.

It will be dropped more than once this year. First at noon on Jan. 31 as part of the Downtown Business Alliance’s “Noon Year’s Eve.” The free event, which is now in its third year, boasts family-friendly cookie decorating in Heritage Square, followed by a sparkling cider toast and a chocolate candy “kiss” to celebrate the new year.

Then, the big drop will bring revelers out with noise-makers, hats and coats to welcome a bright and, Seay is confident, safe New Year’s Day.

“I think it’s going to be a big safe event, and good for Flagstaff,” the patrol lieutenant said.