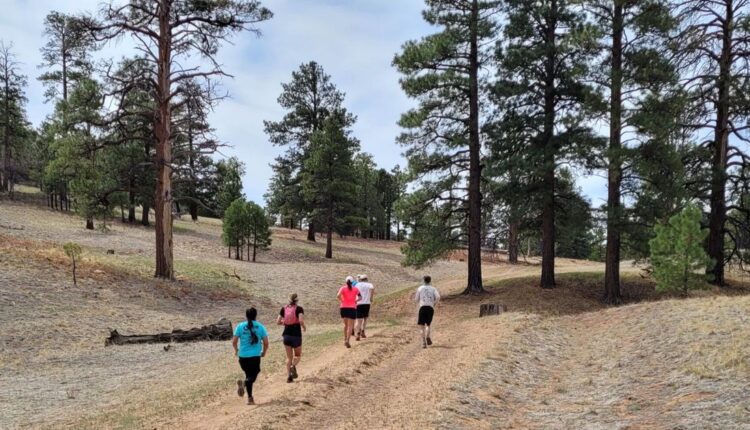 Whether it’s kids taking their first running steps in Buffalo Park, seasoned veterans lining up for community races or local elites earning national honors, our Flagstaff running community is acclaimed for many reasons.

Here are some highlights from 2022:

For solitary runners, the high country offers no end of roads and trails where you can hear only your own footfalls and the laughter of ravens.

But if you’re looking for a group, Flagstaff and Sedona abound with opportunities, from trail runs that start at dawn to pub runs that end at the closing bell.

Two local groups that connect kids with the fun of running are the Mogollon Monsters and the Healthy Kids Running Series. We’re passing a love of running to the next generation, and the one after that…

The 2022 northern Arizona racing calendar listed 28 races. Five were in the Flagstaff Running Series, including the first in-person Pride 5K. We celebrate its inclusive message, as well as the success of the Flagstaff Front Runners and Front Walkers group.

High-elevation fires scorched some of our favorite trails on the San Francisco Peaks this year and caused significant flooding. As one result, the Soulstice Mountain Trail Run was relocated west to Government Prairie. One thing that didn’t change at Soulstice: past winners Chris Gomez and Olympian Rachel Schneider Smith took the overall titles.

Coached by Michael Smith, the men’s cross country team at NAU pulled off the poetical “Repeat Three-Peat,” winning its sixth national title in seven years. This was a nail-biter, the first time in Division I men’s cross country history that a tiebreaker determined the champion.

It’s difficult to capture the numerous highlights of the HOKA NAZ Elite team this year. Let’s look at what they did in just one month: Futsum Zienassellassie won the USATF Marathon Championship in November, Olympian Aliphine Tuliamuk was seventh at the 2022 TCS New York City Marathon and teammate Matt Baxter took 12th — in his first marathon. Following this team is always epic!

NAZ Elite’s Stephanie Bruce is in her final year as an elite runner. She’s given us so much to celebrate during her long career. This year we cheered as she won her third national title, taking the victory at the USATF 10K Championships.

This community-owned running column published 52 pieces written by 27 people (and one trail-running dog), and celebrated its 13th birthday. Thank you, high country running tribe. Join the fun in 2023 by contacting me at [email protected]

Julie Hammonds is the coordinating editor of High Country Running. She sends gratitude to Eric Newman and Michael Hartman at the Arizona Daily Sun for their weekly support.