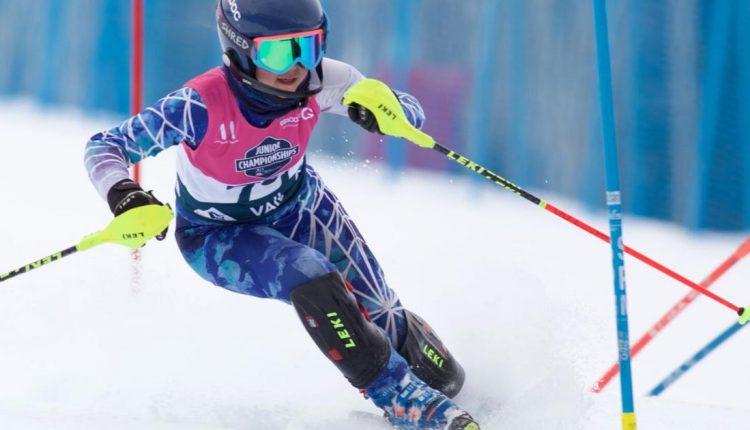 The Flagstaff Ski Club not only provided a unique Arizona experience with skiing and snowboarding this winter, but also had athletes competing and succeeding at an elite national level.

Of 183 participants who started in December and competed all the way until April, there were several medals and skilled performances to be proud of.

Among the accomplishments were three national gold medals in snowboard slalom, giant slalom and border cross in the USASA Snowboard Nationals, Female Snowboard Youth 15-16 division, by Basis Flagstaff sophomore Wesley Wolkowinsky in April. Her sister, Basis Flagstaff seventh-grader Riley Wolkowinsky, earned gold in the 13- to 14-year-old division of the snowboard giant slalom and bronze in the snowboard slalom.

Basis eighth-grader Linnae Kuehl was one of the area’s top skiers, winning the U14 Female Southern Series — the elite local competition. She also competed at U14 Rocky Mountain Division qualifiers at Aspen and Steamboat, Colorado, among athletes from several different states. Her best finish was 17th out of 104 competitors in the Slalom at Aspen.

The USASA Freeski Overall 9-10 freestyle competition was championed by Easton Ake, with many other locals also faring well in their respective events.

“I think that the opportunity for any of the athletes is great,” executive director Kelly Miller said. “For any Arizona kid to have this as part of their childhood experience, and to see these girls go to such a high level against girls who are able to ski and snowboard twice as much as them and compete against them is just phenomenal.”

After two seasons that were limited due to the COVID-19 pandemic in the winters of 2020 and 2021, the excitement of succeeding was mixed with more opportunities on the slopes to create one of the best seasons in recent memory for the competitors.

“It was really fun. This season was really different from the last one, because last year we didn’t really do much at all. This year we got to jump back into everything,” Wesley Wolkowinsky said.

“Skiing has had more events for the snowboarders,” said Kuehl. “So the difference wasn’t as drastic for me, but it still has been a ton of fun.”

Pretty much as soon as the air got cool enough and there was snow on the ground at Arizona Snowbowl, the athletes began putting in work. Many of the athletes took off from school early on Fridays and headed up the hill to begin a weekend of work.

The goal was not only to improve as competitors themselves, but also represent the small portion of Arizona that can ski and snowboard on a regular basis.

Wesley Wolkowinsky said she often talks to people at national meets who can’t believe that there are high-level skiers and snowboarders from this part of the United States. She chuckled as she remembered jokingly telling one person she was competing against that she and her teammates had to ski down sand dunes in the offseason.

“People are like, ‘There’s snow in Arizona? You can snowboard there?’ Which, I think, is pretty funny,” she said.

“A lot of people assume it’s a desert and dead, but obviously it’s not. We can compete all winter,” added Riley Wolkowinsky.

There are, admittedly, fewer opportunities to ride than other Western states, such as Colorado or other mountainous places. But that makes it even more worthy of pride when the athletes do well against competitors from states that have more time available on slopes.

The Flagstaff-area kids often are the only ones representing their community — which makes it even more important to do well in their minds.

“It was lonely for me,” Kuehl said. “At most of the races it was just me. There were a lot of people, sometimes it was close to 200 athletes from all these big series. Then there’s just me from Flagstaff. But it was cool, so.”

“They have these huge groups, and we’re kind of itty-bitty, but then we also kind of kick butt,” added Riley Wolkowinsky.

Miller added that much of the spotlight is put on the national racers, and deservedly so. But, there is much to be proud of with each of the age groups and levels. The overall mission of the club is to provide an outlet that is rare to the state and can create lifelong friendships.

“It’s obviously cool to see the kids doing it at the high levels, but it’s also great to see a 6-year-old come out for the first time in the puffiest of coats making a full hockey stop every turn or every gate and then come across the finish line like they just won the Olympics. They’re so excited, and that passion is what we’re trying to instill,” she said.