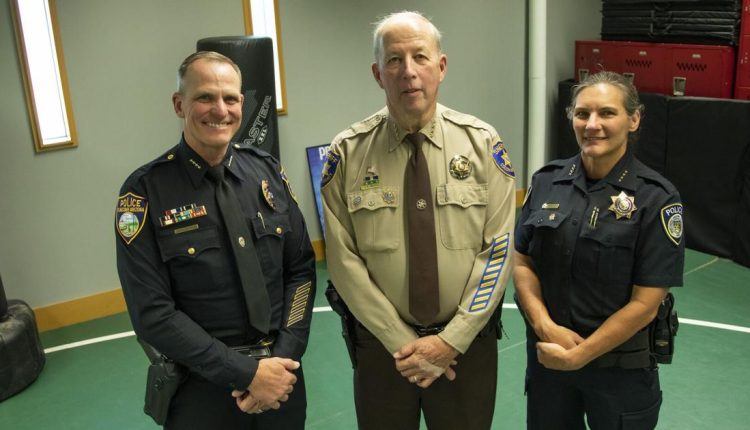 Flagstaff to launch first local police academy in decades, thanks to partnership with CCC

Coconino County Sheriff Jim Driscoll can remember a time when new peace officers could receive their basic training in Flagstaff.

He attended the Flagstaff Police Academy in 1974 when it was located at the National Guard Armory. Years later, the Arizona Peace Officers Standards and Training Board (AZ Post) would move to the Valley, and a lot of the remote academies — including the one in Flagstaff, went away for a time.

Most sworn officers since have been trained in other parts of the state, with the nearest academy located in Prescott. Now, thanks to a partnership between Coconino Community College, the Sheriff’s Office, Northern Arizona University’s Police Department and Flagstaff Police Department, things are about to change.

There are 13 students enrolled in High Country Training Academy — Flagstaff’s first local police academy in decades. Classes start in less than a week, and law enforcement leadership is hopeful this will be a major turning point for the future of policing in the area.

For one thing, keeping recruits in Flagstaff for their 20+ week training will save local police and sheriff’s departments a pretty significant chunk of money. Flagstaff Police Chief Dan Musselman estimated it costs roughly $10,000 to send an officer-to-be to academy in other parts of the state.

“It’s a better financial deal for our department and it keeps our people here. Right now we send our new deputies to Yuma, to Lake Havasu, to Prescott for their training, and that’s 21 or 22 weeks. Now we’re able to keep them here and provide that same level of professional training that they need to become police officers,” Driscoll said. “It’s going to save us money. It’s going to save the taxpayers money by providing that training here locally.”

Recruited officers don’t pay for academy themselves; the agency that hires them does. Every recruit hired by Flagstaff Police Department, for instance, has their tuition paid by FPD. The department also pays the officer a per diem, and, according to Musselman, covers the cost of their lodging.

That can mean recruits living in a VRBO or vacation rental, and spending weeks away from support systems. In addition to cost savings, the local academy will keep students close to their families, and officers say that is a priceless benefit.

“They can still go home and help make dinner, help with the kids,” Musselman said. “We’ve all been struggling with recruiting. Maybe there’s people who have discounted opportunities here because they can’t go away for 20 weeks.”

Proximity is key. Instructors at CCC’s new Police Academy will take time off their beats at the Sheriff’s Office, NAUPD and FPD to share their skills and provide training to recruits. Officials say that means there’s potential for officers-in-training to connect with local mentors, and make connections during their coursework that they’ll use when they’re out on patrol.

“When things happen that are of a critical size, some of the partnerships that help our agencies work smoothly together, begin at academy,” Musselman said.

As an academy instructor, Sgt. Nick Jacobellis with the Flagstaff Police Department hopes to instill in each recruit levels of respect, professionalism and an understanding of the value of teamwork. On top of that, Musselman emphasized that students will be taught stress management techniques as they learn to respond with professionalism under pressure.

Local instructors have the ability to tailor the instruction a bit, helping students understand some of the situations they’ll likely face on the force in northern Arizona specifically.

“That’s a good thing because Flagstaff is unique in many ways around Arizona. Because of the wide variety of communities that we have — the Navajo Nation, along with several other tribal reservations around, and Flagstaff too with the university and the amount of tourism we have,” Driscoll said. “We can tailor the training of our officers more to meet those needs than we would if we send them 200 miles away to some other community for training.”

The curriculum is approved and accredited by AZ Post, which requires that each recruit receive 663 hours of training before graduation. In Flagstaff, recruits will receive 832 hours of training over the course of 21 weeks.

“We want this academy to be exceptional, not minimal,” Jacobellis said.

Some of those additional training hours will be focused on cultural sensitivity, and other topics that are relevant to policing in Flagstaff and northern Arizona. County Manager Steve Peru said he hopes the police academy will be able “to create a culture of the profession that’s unique to the region.”

There will be room for 24 recruits in each graduating class, with instruction cycles starting in October and April. The schedule is intentionally set up so that it won’t overlap with other AZ Post Academies in places like Yavapai or Pima County. Class will start at 7 am on Monday, and let out at 5 pm four days a week.

In a few days, recruits will pour into two main classrooms on Coconino Community College’s Lone Tree Campus. The first is a grey-carpeted lecture hall, with bright orange-gold paint on the walls, long tables, and all the trappings you’d expect in a classroom devoted to higher education.

In the next room over, you’ve got to watch your step. The floor is higher, padded by a forest green shock-absorbing training mat. There are red lockers in one corner, and a line of punching bags and dummies against the wall. Here, recruits will receive more hands-on, practical training. The forested trails around the campus will also be utilized — CCC’s squirrel population will soon grow accustomed to classes of officers-in-training jogging or running under the trees in the afternoons.

The two classrooms, officials hope, are just a launch pad — not just for the careers of up-and-coming officers, but for a long-planned comprehensive law enforcement academy. CCC has worked with the Sheriff’s Office to train detention officers since 2005. Now, they’re expanding to train police and deputies to AZ Post Standards. Eventually, there are plans to launch a Joint Training Facility — an all-in-one peace officer and first responder academy. In the future, CCC also hopes to make academy coursework fully accredited, providing 24 credits toward a degree program.

CCC interim president Christal Albrecht said she’s hoping to approach the state legislature to move forward with funding for fire, police, and other academies, and invited officials at northern Arizona’s law enforcement agencies to provide input on the development process.