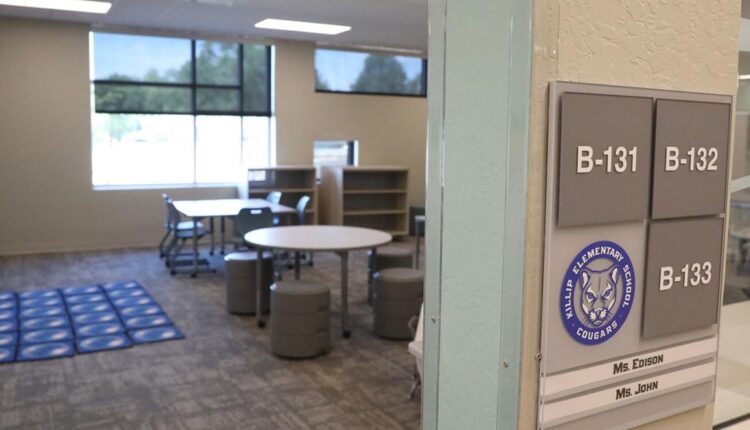 Voters approved a $100 million bond for the district in November’s election (which passed with 59.41% approval). The school replacements, including potential relocations at both sites, are the two biggest projects planned for bond funds, with $25 million allocated for each.

With the replacement of Killip Elementary finishing earlier this year, Marshall and Kinsey are the district’s oldest schools, with their construction dating back to the 1950s.

After tabling the item for small edits Tuesday, the board voted at a special meeting Friday to approve the first step in the process of replacing the schools, releasing a request for qualifications (RFQ) from potential architect and engineering partners for the projects.

In Tuesday’s board meeting, FUSD Superintendent Michael Penca said he expected a contract to come to the board for approval in March or April, after which “we’d just keep working through the process.” The district has the option to choose the same firm for both projects, or to select two different ones.

Later steps in the process he mentioned include selecting construction managers, design, site development and determination and guaranteed maximum price and permitting.

That to-do list will be followed by construction, he said, which will take “the longest chunk of time.”

While the district is still early in the process, Penca estimated that Marshall’s replacement would be completed in time for the start of the 2025 school year — with Kinsey’s new building finishing in 2026, if all goes to plan.

The district is also developing a timeline for sales on the recently passed bond. Property assessment estimates are now higher than when the voter information pamphlet was published in June — which Penca said is “good news” for the district, potentially allowing it to speed up the process or change the amounts while still honoring the tax impact advertised to voters.

“We’re trying to make sure we have the funds needed, maintain our commitment to district voters, and also deliver these projects and also stay ahead of escalating costs,” he said. “We can predict each year we delay building the school it’s probably going to cost us about a million more to build it because of the increases in labor costs or material costs.”

He added: “We’re watching what interest rates are doing. There’s all these variables but we’re really grateful and excited that were even at this opportunity with this authorization of the voters. Tonight is just that first step.”

Member Anne Dunno said she would like to include a public engagement process in the development of the plans for both schools, citing questions she was getting about potential relocation at both locations from community members.

“I think it’s really important that between the district and the technical support of this architecture and engineering firm to have a really good public outreach into the community, with the school community and the neighbors to these schools to have input into where these schools end up ,” she said. “We get great support from our community, and I think that we really want this to be a very open and transparent decision-making process by the district.”

Penca said community input had always been intended as part of the process. FUSD had taken similar steps when developing Killip’s designs, he said as an example.

“I know that was something we all valued and are proud of the way that school turned out, because of that stakeholder engagement upfront,” he said. “So for us, that was sort of an assumed given.”

Public engagement was added in the edits to the RFQ that was approved at Friday’s meeting.

Accommodating this sort of the process is part of the reason for staggering the openings, he said.

The district would also need to take additional steps should it decide on relocation. For example, it would need to acquire land to move Kinsey and make decisions about the existing sites might need voter input.

“There’s all kinds of steps there and that’s why that timeline got staggered, but also trying to maximize to deliver on one of the big projects within those first couple years,” he said.

A recording of both meetings is available at vimeo.com/fusd1. Discussion of the project begins around three hours into the Tuesday meeting.