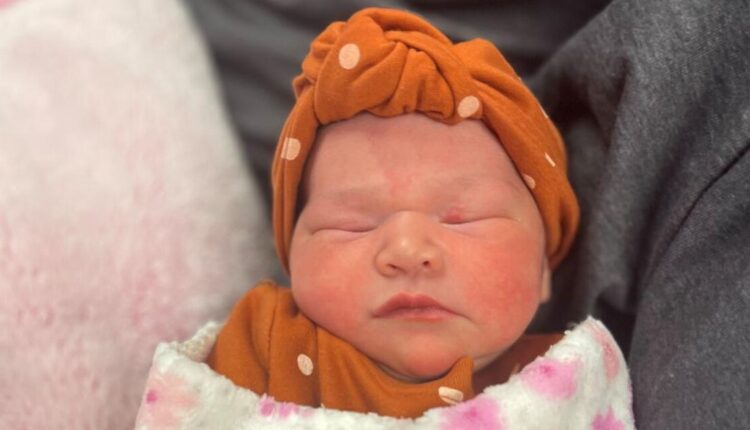 The couple lives in Williams, where they were when Schmidt’s contractions began on Saturday. Worried about the storm in the forecast, they decided to head to Flagstaff Medical Center and wait there, checking in once the contractions were closer together.

“The contractions were painful and we knew the storm was coming, so it was like, ‘let’s just go now,'” Schmidt said.

They drove over in the fog and began walking around the hospital, getting checked in a little early by a security guard.

“They were actually going to send me home, but they said her heart rate was a little high, so they wanted to watch it,” she said. “…Then my contractions just came closer and the baby came.”

Schmidt’s due date was Jan. 4, so they weren’t expecting a New Year’s baby. By Saturday evening, though, she said she was trying for a Jan. 1 birthday for her daughter.

“The doctors told us there was no one even on the floor and she was like, you’re really in the lead, you have high chances,” Schmidt said. “… That was pretty cool.”

After a mostly uneventful labor, the baby arrived. They named her Azalea Mila — the first name was something Schmidt liked the sound of when she found it on the internet, and the middle name was one Soto’s mother liked, also discovered online.

Azalea is Schmidt’s fourth child — her siblings are 7, 3 and 1 — and Soto’s first. Soto has been “a natural” in caring for the other kids, she said, though, so he’s ready to dive in.

They haven’t told their other kids about the delivery yet, but Schmidt said they were all looking forward to a little sister.

“They’re pretty excited,” she said. “I don’t know about my youngest yet. … Her personality’s like she’s pretty out there, so we’ll see how she felt.”

When asked her hopes for her new daughter, Schmidt said they were the same for all her children.

“I just hope that my kids have a healthy and safe future, because this world’s getting crazy,” Schmidt said. “So I really feel for them and hope the best for all my kids. Maybe they can make a difference in this world.”