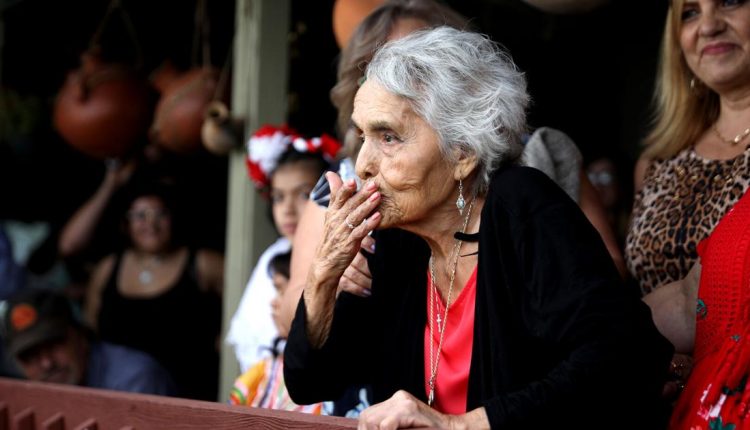 Lupe Gil Anaya, who has spent most of her life in this city raising a large family and teaching many, celebrated her 100th birthday with a party at her home in Flagstaff this week.

Anaya first moved to Flagstaff around 1925 when she was a toddler. Her family had come from New Mexico, where they had moved from Mexico a few years earlier. Her father worked at the Saginaw Sawmill in Flagstaff, so when the family first arrived, they lived in company housing where the university shopping center is now.

“She was only maybe 2 years old when she got to Flagstaff,” her son, Frank Anaya, said.

About a year later, Lupe’s father became the caretaker for Our Lady of Guadalupe and the family moved into the church.

“By this time, she was a little bit older and she remembers she had a well right there, a big garden,” Frank said.


Lupe Gil Anaya, 100, peeks over a deck railing as she watches a mariachi band playing for her during a family celebration of her 100th birthday on Sunday at the family home in Baderville.


His grandfather, Lupe’s father, painted two images of the Virgin Guadalupe for the church — the first was too small for the priest’s taste, so he made another. The redone painting now hangs in San Francisco de Asis Church in Flagstaff.

One of family historian Valerie Kraft’s favorite stories from her grandmother is about her love of dance — which continues to this day.

When Anaya married, she moved into a house that her husband and father helped build on Tucson Avenue. The family moved in around 1947 and she still lives there today, with a rotating set of her descendants taking turns spending the night to help take care of her.


Many in her family mentioned her dedication to teaching and affinity for kids. Anaya helped found Head Start in Flagstaff, and after “studying up a storm” to become a US citizen at age 75, put that effort into helping others study for their own citizenship.

“My mother was always involved with people, helping people,” Frank said. “Whoever came by and needed help, she was always willing to help. My mother had her own car and drove, so she was always driving people to the doctors, whatever they needed. …There was of course also a lot of poor people that needed help, so there was a lot of caring of children that had nowhere to go. At our little house there on Tucson Avenue, we always had all kinds of people, young kids and stuff. She was like a foster mom.”

Granddaughter Danielle Portillo said Anaya was part of what inspired her to become a kindergarten teacher.

“Every kid in the world gravitates to her,” she said.

Both granddaughters have good memories of Anaya from their own childhoods.

“She spoiled me rotten,” Kraft said. “… I was her oldest grandchild, and she always really took care of me. I just always remember her being the hardest worker ever, and there was always somebody in the kitchen eating because she never stopped cooking.”

Cheesy frijoles is a favorite dish for Kraft from these times, she said.

“She was funny and outgoing and very adventurous,” Portillo said. “We would take hikes out in the woods for hours and hours. We would go woodcutting. We would hike. She loved being outdoors, she loved gardening, she loved planting things.”

Around 1970, Anaya began attending Northern Arizona University to get more training for her work with Head Start. She then spent additional time in California furthering her education. In all, she spent at least 30 years teaching with the organization.

Lupe Gil Anaya speaks with family members Sunday afternoon during a gathering to celebrate her 100th birthday at the family home in Baderville.


“She was always involved with kids. To her, that was important to keep kids out of trouble and stuff, even though all of us were always giving her a hard time,” Frank said.

Part of why Anaya decided to spend so much of her life in Flagstaff has to do with her love of the outdoors, Frank said.

“The San Francisco Peaks, those are her mountains, she says,” he said. “When we were kids, she had a car but no pickup, so no truck, and we used to go out into the woods all the time. We’d even climb all the way to the top of the Peaks. We used to go to the top of what was then the Weatherford Road — it used to take you up quite a ways — and from there we would just set up the camp right there, and then climb all the way up to the Peaks . One of the things we used to make fun of her was she’d be in high heels and be climbing mountains.”

“She loves her high heels,” his wife, Lydia Anaya added.

Portillo said it was originally a small family celebration that ended up growing.

All but three of Lupe’s grandchildren were able to make it.

It was a potluck, with a surprise serenade from a mariachi band, Chapala.

“She loves all that kind of music, so we surprised her by having them come and they serenaded her. She was just in heaven; she really enjoyed it,” Lydia said.

Heels and bouquets were set on the tables as centerpieces.

“She loved gardening. If you passed by her house, everybody would stop by and admire all the flowers and everything she had growing. She loved to be outdoors and gardening,” Lydia said.

“Even her trees were sculptured and stuff, and by her house there was one certain tree that everybody was always admiring because it was in three layers,” Frank added.

Lupe Gil Anaya, 100, is all smiles as she sits surrounded by a collection of her great and great-great grand children Sunday during a family celebration of her 100th birthday at the Anaya family home in Baderville.


Portillo said Lupe holds her family together. All of her kids now live in Flagstaff, as do many of the younger generations.

“I just love how she keeps the family together,” Portillo said. “… She just always brought us together for Christmas, for Thanksgiving. We usually had it at my parents house, but it was usually my grandmother’s thing: ‘Let’s get together, let’s do this.’ It just shows you how much it meant to her to have all of us together. … She really is the glue that holds the Anaya family together. It’s a wonderful thing.”

Lupe Gil Anaya looks out at the garden of the Anaya family home Sunday during a large gathering to celebrate her 100th birthday.