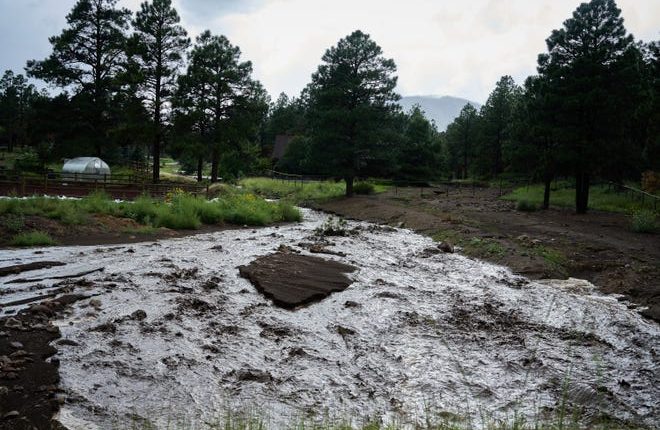 Neighborhoods in the Pipeline East flood area experienced flash flooding again on Wednesday after more than an inch of rain fell on the east side of the San Francisco Peaks starting around 11:45 am

Within half an hour, multiple watersheds along Highway 89 were already overflowing with fast-moving water and heavy debris, causing a road closure in both directions by 1 pm

The affected neighborhoods once again include Timberline, Wupatki Trails, Fernwood and Doney Park, areas inundated with floods all season and where an estimated 1,500 homes are at risk of flooding.

Coconino County has recorded 41 flood events so far this season, only a handful of which were in the city of Flagstaff, said Coconino County Flood Control District manager Lucinda Andreani.

“The poor mountain is unraveling fairly quickly,” she said.

Andreani and county officials are working on multiple avenues for receiving state and federal funding for long-term mitigation projects that are expected to cost more than $125 million.

And after Wednesday’s event, that may be less of a hard sell because the people in charge saw the flooding firsthand.

Andreani was driving around the affected areas with US Rep. Tom O’Halleran, D-Ariz., federal officials from the Department of Agriculture, the US Forest Service and the Federal Highway Administration when they got caught in the storm.

They had to seek high ground and wind their way through Wupatki Trails as the water rushed along the road and kept pace with their van at 25 mph, she said. They eventually made it back south to Highway 89 to avoid becoming trapped.

“They got to experience it,” she said. “It was a very dramatic experience for all of them.”

So far, the short-term mitigation methods put in place have largely held, preventing any major internal flooding of properties, she said. With more than 700,000 sandbags and 4.5 miles of concrete barrier, the water was redirected away from homes. But as a result, water has saturated the rest of the properties and repeatedly flooded roadways.

Just Wednesday, multiple homes in Wupatki Trails had their driveways completely wiped out, Andreani said. Now, only pipes remain as residents are left with precarious access to their own homes as they wait for contractors for repairs.

The mountainside watersheds that carry runoff into these neighborhoods have almost entirely unraveled since they were severely burned in June’s Pipeline Fire.

The charred soil that would typically absorb some of the rainfall is now almost entirely water-resistant, funneling a majority of the water downstream into residential properties and eventually across the highway.

“Things are so saturated up here,” she said. “We’re getting so much erosion on-forest that those channels are becoming very, very efficient at transporting water and sediment down the hill much more quickly.”

Coconino County officials offered the following tips online and advised residents to prepare for approaching storms and potential flooding threats. They further recommended that residents sign up for emergency alerts and remember to stay in READY status for potential emergencies.