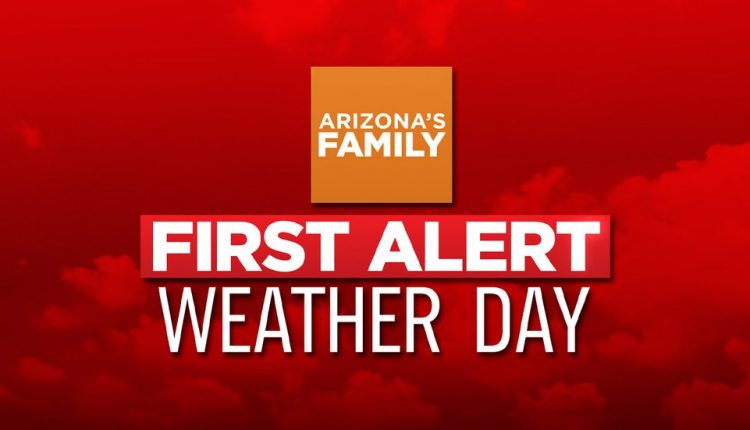 Flash Flood Watch issued for most of Arizona

PHOENIX (3TV/CBS 5) – Strong storms are underway in the mountains this Saturday, while the monsoon is getting ready to ramp up in the deserts of the state soon.

Thunderstorms this afternoon are most numerous across the mountains of Northern and Eastern Arizona, where plenty of lightning and heavy rain is ongoing. A Flash Flood Warning, which means flash flooding is either happening or imminent, has been issued for the Pipeline burn scar area near Flagstaff until 5:30 pm At least an inch of rain has fallen in that area already Saturday afternoon.

The Valley is quiet this afternoon and chances are down just a bit for storms this evening. There’s about a 20% chance for some storm activity later this evening, including gusty winds and blowing dust. But our chances are much better for tomorrow. In fact, Sunday will likely be the first in a stretch of very active days across the Valley and state. A Flash Flood Watch has been issued by the National Weather Service from 1 pm Sunday to 5 am Monday for the possibility of localized flooding caused by heavy rains. That’s in effect for much of the state, including all of Maricopa, Pinal, Yavapai, and Pinal Counties.

Storm chances are near 50 to 60% in the Valley for both Sunday and Monday, with explosive storm development likely late in the day Sunday. Most weather models show outflows moving into the Valley tomorrow afternoon or evening, triggering strong thunderstorms. There is also abundant monsoon moisture streaming into the state, leading to higher rainfall amounts and dangerous flooding. Likely we’ll see some flash flood warnings issued Sunday as well, especially near burn scars.

Both Sunday and Monday are First Alert Weather Days, but we may be adding on to that for Tuesday and Wednesday as well. Storm chances are pretty high on both Tuesday and Wednesday. All in all, this could be one of our most active stretches during the 2022 monsoon season.

AZFamily’s First Alert Weather App First lets you track storms and get severe weather alerts wherever you are. Get animated radar, hourly and 10-day forecasts, video updates, rainfall totals, and an interactive traffic map. It also provides a 250-meter radar, which is the highest resolution possible. This radar allows you to look into the future so you can see where weather is headed.