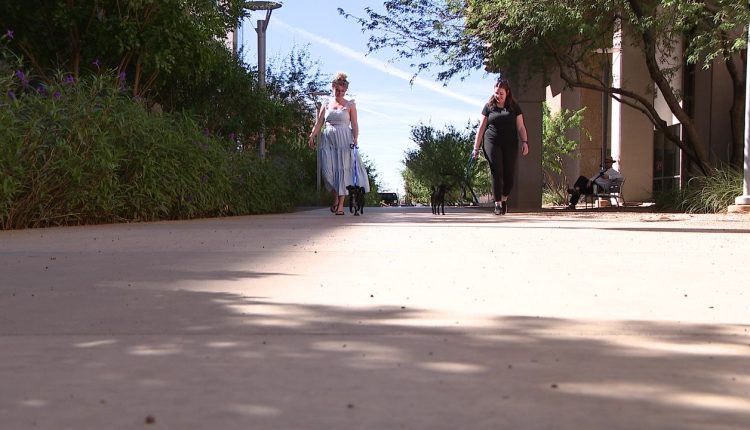 PHOENIX – In Arizona, an unusual friendship has formed between rescue dogs and some flight attendants.

The cabin group members, who work for a major international airline company, say they wanted to give back to the communities they stop in, and since then, the idea soared to new heights, so to speak.

“The MASH Unit is a unit of the Sheriff’s Office,” said Sgt. Paul Taylor with MCSO. “Its purpose to take care of animals that we seize during investigations of criminal abuse and neglect of animals.”

Some of the animals in the MASH Unit are kept in a rather less conventional place.

“They are inside either a kennel, or in our case, inside an old jail,” said Sgt. Taylor.

More than 248 dogs and cats are temporarily calling the old 1st Avenue Jail home, waiting for the next of kin or to be adopted into their new forever home. MCSO’s MASH Unit uses current staff, volunteers, and female inmates to help care for the animals, and recently, they are getting an extra helping hand from across the pond.

It all began with a call from a British flight attendant named Tegan Cleaber-Powell to MCSO’s MASH Unit. During the call, Tegan asked to help out during her layovers in Phoenix.

“She explained that she was from one of the major international airlines, and that one of the things that they like to do when they are in different towns was to find animals shelters and help walk or socialize the animals,”

“It’s funny because they come down and they’re so shy, and then by the end of it, they’re in your lap and just can’t get enough cuddles, so it’s quite cute,” said Cleaber-Powell.

Cleaber-Powell’s idea soon took off, with more flight attendants joining in. What began with just her is now a much bigger concern.

“Probably around the 20 mark,” said Cleaber-Powell. “I know there are more definitely coming tomorrow from another flight.”

“I actually got put on a trip to Phoenix and [Cleaber-Powell] was on it, so I messaged her and said ‘oh I’m on your Phoenix [flight],’ and she was like ‘do you like dogs?’ so I was like, ‘yeah. Why?’ And then she told me that she had set us up, so I was like, well, we will go together then,” said Demi Arries.

Cleaber-Powell’s efforts were not only benefiting the animals, but the cabin crew as well.

“They are just adorable, and I think it just helps, you know, the dogs and us because we are often away from home for long periods of time and we are missing our own pets, and its just the best of both worlds because then we get to take our other dogs and socialize them and help them out, said Cleaber-Powell.

For now, crew members say this will probably become a permanent thing, and many have already been back several times in the last two weeks, while between flights.