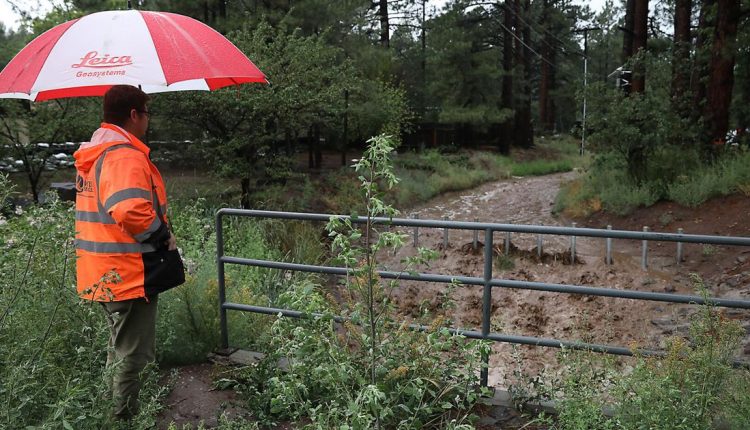 Despite a weather-than-normal monsoon season, Flagstaff has yet to see an instance of rainfall that tests the capacity of flood mitigation systems constructed beneath the Museum Fire scar.

While many of the systems have demonstrated proofs of concept, city officials urge the public to remain cautious as the planned mitigation nears completion. Although northern Arizona is in a hot and dry spell, forecasts suggest that weeks of active monsoon — and the possibility of more significant storm events — are still to come.

The Museum Fire flood corridor is just one of several post-fire flood corridors that the City of Flagstaff and the Coconino County Flood Control District (FCD) are hoping to work. After the area experienced catastrophic flooding during the 2021 monsoon season, the city, FCD and the US Forest Service invested more than $12 million into improvements designed to mitigate the risk of flooding, including on-forest alluvial fan restoration, infrastructural improvements within city limits and detention basins. Most of the improvements were functional this year’s monsoon season and so far have managed any flooding activity in the corridor.

“We’ve seen three events on the Museum burn scar with no overtopping and we’ve not exceeded the capacity of the channels,” said Scott Overton, Flagstaff Streets section director and flood response incident commander. “Everyone’s kind of speculating: what does this mean? Does this mean it’s been fixed?”

Overton said it’s too soon to tell whether the Museum Fire mitigation has fixed the problem, because the mitigation system has not been truly tested by this year’s rainfall. Last year, the area saw five significant rainfall events, two of which had 60-minute rainfall totals of more than 2 inches — 2.17 and 3.35 inches, to be precise. This year, on the other hand, the area has only seen three significant rainfall events, none of which have exceeded 1.5 inches in 60-minute rainfall totals.

While Overton said the improvements are “meaningful,” he emphasized that “no one is really comfortable saying it’s completely healed, we’re ready to move on. We’ve just not seen the type of rainfall we saw in 2021 in 2022.”

Overton’s perspective was shared by James Duvall, whose home is at the end of Paradise Road where the Museum Fire flood corridor enters city limits. The area experienced significant flooding in 2021. This year, the wash by Duvall’s home has stayed “pretty much dry.”

As for the overall effectiveness of the system, Duvall withholds judgment because “we just haven’t had anything super hard.”

“We haven’t really seen the duration and intensity of storms that we saw last year,” Duvall said. “…It’s kind of difficult for me to gauge how well the work has affected that. But I’ve got to think that it’s drastically going to help.”

They definitely have helped, said FCD administrator Lucinda Andreani. She suggests the mitigation systems have proven effective for “typical” rainfall that can be routinely expected.

The rainfall levels seen in the area during 2021 were “unusual,” Andreani said, noting that the two largest storms of last year were of a rare severity — the type the region expects to see once every 200-300 years.

This goes for the on-forest mitigations as well as the mitigations within city limits. According to Adam Miele, public works project manager, the new detention basins downstream at Killip Elementary School successfully showed a “proof of concept” during this year’s monsoons.

“On July 31 — a pretty good sized event in town — we did get some water,” Miele reported. “[The basins] are functioning; they are working.”

The work to finalize the Museum Fire flood mitigation system is also ongoing. The Killip detention basins are slated for some final improvements — such as “rip-rap” lining to improve their function — there is another on-forest alluvial fan restoration scheduled for the fall, and another set of sediment basins known as the “Parkway Basins ” are slated to be constructed on a city parcel upstream of a culvert on Linda Vista Drive.

According to city storm water manager Ed Schenk, these final basins are “an important part of the overall system, because it allows us to drop out that final amount of sediment coming through the forest system before we get to the storm water system.”

He added it will help “clean” floodwaters to prevent them from clogging stormwater systems within the city.

Schenk said the city expects to commence excavation of the Parkway Basins come “early spring” of 2023. There is a need to take time to communicate and collaborate with residents in the area because the basins will amount to a “major landscape change,” he said.

As the Museum Fire flood mitigation system progresses toward its final design, there is still some possibility that it will be more thoroughly tested during this year’s monsoon season.

Benji Johnson at the National Weather Service said Flagstaff residents should not “get complacent” with the current streak of dry days and clear skies.

“There are signs though that the moisture could pick back up after Wednesday and Thursday of this week,” Johnson said.

For an outlook on the remainder of monsoon season in general, Johnson referred to the medium- and long-term forecasts of the Climate Prediction Center.

“They’re still saying above normal precipitation for the rest of September,” Johnson said. “We can’t say for sure is the worst is behind us.”

Border Patrol agents seize narcotics, firearms, paraphernalia and a stolen vehicle from Yuma in an arrest