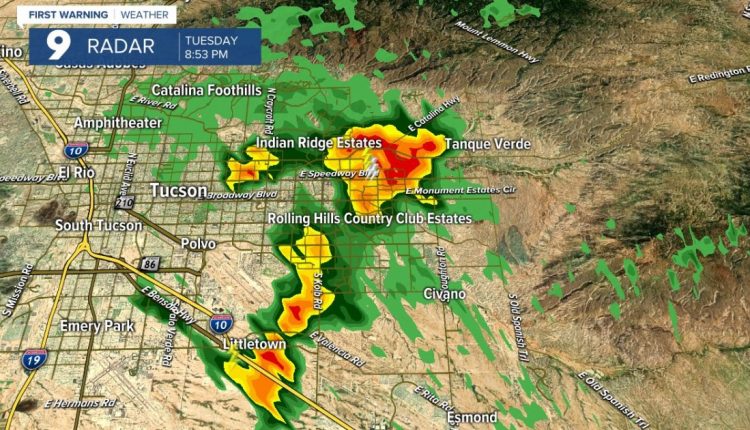 Heavy thunderstorms continue to hit the metropolitan area of ​​Tucson. A lightning flood warning applies until 12:30 a.m. for most of the east and south sides of the subway area, where more than 2.5 cm of rain has fallen in the last hour. Turn around, don’t drown! pic.twitter. com / RabeWck2j9

📡Tucson Radar Update 9:05 PM: A series of showers and storms has developed over the eastern Tucson Valley and is currently moving east. Storms are fairly weak with brief, heavy rains, lightning and gusty winds. #azwx pic.twitter.com/KldBELtd1g

Another flood warning was issued for Cochise County, including Dragoon, through 5:15 p.m. More than an inch of rain has fallen over the area, creating ablutions that run along with some water jams on local highways. Please slow down and be safe! pic.twitter.com/Nkz8CUL8AW

A flood warning is in effect until 4:45 p.m. along the San Pedro River from south of Redington to north of Dudleyville. The heavy rain this morning caused a lot of runoff into the river’s catchment area and in some places it has flowed out of the banks … pic.twitter.com/taRnsEZcOV

Numerous flash flood warnings and warnings are in place across Cochise County this afternoon. Thunderstorms have brought up to 2 “of rain over the area and washing facilities are running. Some flooding has also been reported on the streets. Go back, don’t drown! Pic.twitter.com/av9ByueVm9