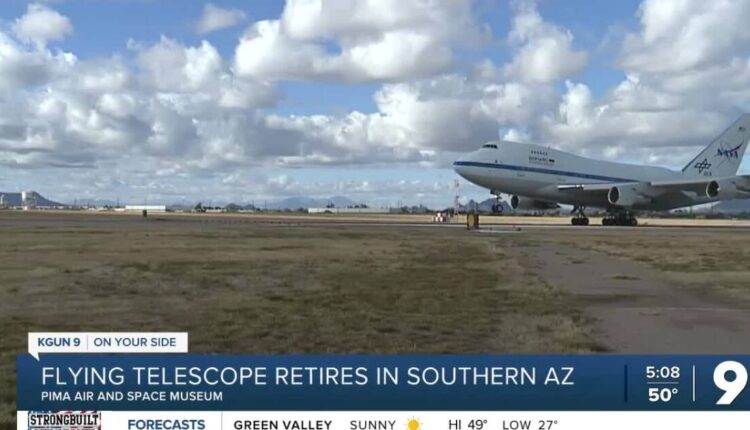 TUCSON, Ariz. (KGUN) — A Boeing 747 modified to explore space landed at Davis-Monthan Air Force Base Tuesday. The aircraft called SOFIA does its space exploration by flying to high altitude, opening a giant door and giving an infrared telescope a clear view of the stars and planets.

SOFIA landed at Davis-Monthan so it’s close to the Pima Air and Space Museum where it will retire after more than 900 flights.

Tucson’s an ideal town for a plane like SOFIA because a lot of Tucsonans love planes, and love astronomy.

Tuesday was a typical, busy day at Davis-Monthan, with DM’s signature A-10s, and HC-130 on the runways. Then something very untypical flew in: a Boeing 747 named SOFIA. It’s not a woman’s name. SOFIA stands for Stratospheric Observatory for Infrared Astronomy.

NASA and the German Space Agency built a huge door in the side and installed a specially stabilized telescope to give SOFIA a view almost like a space telescope but with more flexibility and easier servicing.

Charles Kaminsky studied astronomy at the University of Arizona. He sat at a console and served as Mission Director for 369 SOFIA flights.

He says, “Think of the mission director as kind of like the conductor of an orchestra. There’s a telescope operator sitting here, other science people sitting in front of me, other sciences here looking at the data coming in.”

But after more than 900 flights NASA and its partners at the German Space Agency decided to devote SOFIA’s budget to other ways to explore space.

For pilots Liz Ruth and Jim Less, it’s sad to fly SOFIA’s last flight and step away from the flight deck of such a special plane.

There’s a question they hear all the time: What’s it like flying a plane with a giant door open?

Liz Ruth says, “We can’t tell if the door is open, in transition, or closed. It’s just we don’t want to open the door below 35,000 feet. And in order for us to know when the door was open, we had to put a light in the cockpit because we had no other way of knowing other than talking to the mission director. So it was an amazing piece of engineering.”

SOFIA began as an ordinary airliner 45 years ago before NASA converted it from moving people to moving forward our knowledge of the universe. Now it will educate in another way as people learn about SOFIA and it’s mission at the Air and Space Museum.

SOFIA will wait at DM for about a month before it’s towed to the museum. NASA will spend several months removing some of the onboard equipment before SOFIA goes on display.