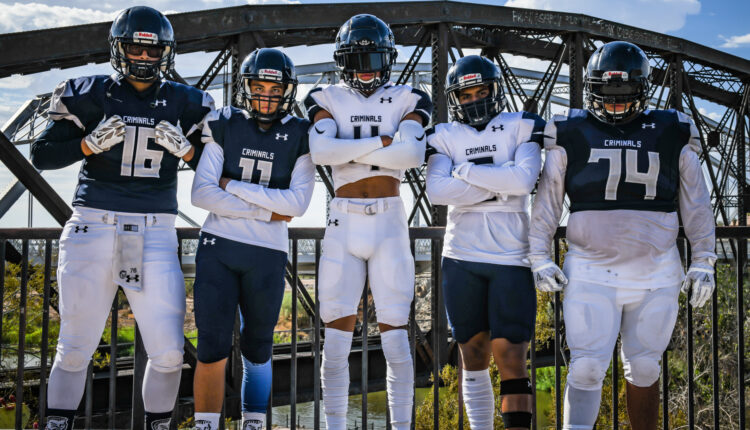 After starting the season 0-2, the Criminals won 7 of 8 and finished with the most wins in a season since 1993

“This was kind of a plan in progress, since I took over as head coach,” Seibel said. “We’ve been planning for this.”

Seibel was planning for more wins than in years past. The Criminals hadn’t won more than three games in season since 2013 and hadn’t enjoyed a winning season since 2009.

“I’ve been hearing it for a long time, team wise, they just know we haven’t won in a while or win a lot,” Seibel said. “That was something they really took to heart, they wanted to put Yuma High back on the map.”

This season, the Criminals were led by a large senior class that savored their chance under the Friday night lights.

“Us seniors were always at the bottom of the totem pole,” Senior Joseph Bowen said. “We weren’t the strongest, not the biggest, not the best but always together.”

The Criminals opened 2022 with two home games and lost both of them to Dysart and Mohave.

“We started to realize we were having the old habits from last year, they’re coming back,” Bowen said. “After the first two losses, nah, we couldn’t handle it.”

The Criminals won their next two games over Antelope and Kofa by a combined score of 95-0. At 2-2 on the season, the Criminals hit the road to Kingman to face the undefeated Bulldogs who were also ranked 9th in class 3A. The Criminals won 34-0.

“We all want to be football players, all want to be winners here,” Seibel said. “Not only on the football field but in life and that’s contagious. That energy, that positive energy when you get it together, the limitations are endless.”

“We’re always talking to each other, always communicating, building each other up,” Senior Andrew Ursulo said. “If someone drops a pass or misses a play, there is always someone there to pick them up.”

“A lot of the credit goes to them, the leadership,” Seibel said. “We didn’t have to sit there and handle the leadership. All the management of the drills we can just instruct and teach, the seniors and leaders handled that aspect of it. It means a lot more when it comes from your peers rather than a coach.”

The Criminals won seven of their final eight games and ended the season 7-3. The best season and wins the program has had since 1993. Despite the success, the criminals found themselves just out of the top 16 ranking to reach the state playoffs. Yuma ended the season dropping from #17 to #18 even though they won in the regular season finale.

“We’ll always remember this team,” Senior Manny Garcia said. “I’m pretty sure none of us will forget each other either.”