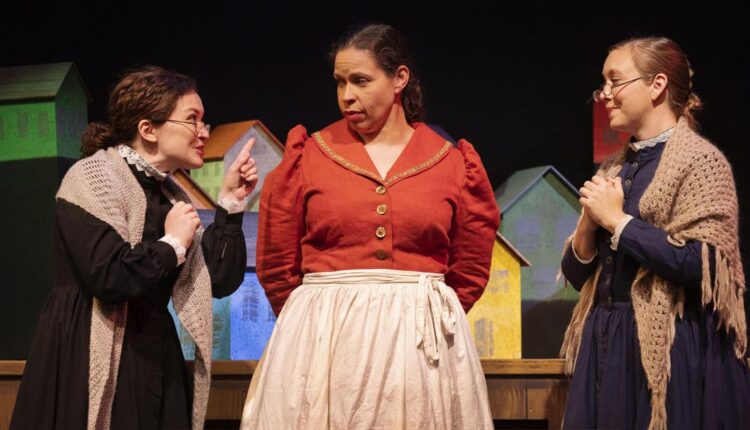 Food, forgiveness the focus of production on stage in Tucson

Food, forgiveness, lust and love are packed into “Babette’s Feast,” a story that reminds us art can be transformative.

The story, which switches back and forth in time, takes place in the 19th century in a Nordic hamlet sandwiched by two steep cliffs. Protestant sisters Philippa and Martine reside there. Their days are kept busy as they tend to the aging parishioners their late father once led. Kate Scally as Philippa and Bryn Booth as Martine make the characters’ piousness palpable.

Life there is austere, religious and pretty much devoid of any pleasure other than what is pulled from prayer and religious hymns.

One day, Babette appears at the sisters’ door. She is fleeing certain death in France, where she took part in the revolutionary Paris Commune.

She comes with a written introduction from the great opera singer Papin, who once was in the village and saw his reason for living in mentoring Philippa, who has a voice the angels would envy (and indeed, Scally has just such a voice). The singing lessons, and Papin, aroused something in Philippa that scared her, so she asked her father to cancel them. Papin heads back to Paris feeling robbed of his purpose (Dennis Tamblyn plays the character’s pomposity and heartbreak perfectly).

Babette (a stoic Carley Elizabeth Preston) becomes the sisters’ housekeeper and cook. She slyly seasons the very plain, not very good, split cod and bread-and-ale soup the sisters taught her to make. She saves them household money. She frees up their time so they can tend to the flock. They come to depend on her.

After 14 years of this, Babette finds she has won the lottery in France, where a friend dutifully purchases tickets for her every year. It’s a fortune — 10,000 francs.

Rather than packing up and heading back to Paris, she asks the sisters if she could please cook a French meal to help celebrate their father’s 100th birthday. She wants the parishioners, who have become bitter and petty over the years, to join them.

Now, cooking such rich delights as caviar-packed blinis demidoff and rum sponge cake on stage just wouldn’t work. So what became a visual delight in the 1987 movie was all done in pantomime.

As the sisters and their guests indulge in the food and wine, and the sensual delights wash over them, tongues become looser, forgiveness comes quickly, and joy settles in on them. Babette’s art, just as Philippa’s art did to Papin years before, opens their eyes to new possibilities of living. As Dineson writes, “righteousness and bliss … kiss one another.” The balance of the two is the art of life.

Translating the tale to the stage robs us of the subtleties that the story and the movie made clear. And the presentational style denied us a good understanding of, or an attachment to, many of the characters. That central theme: the transformative power of art, was much too subtle. To get the full impact of that, watch the movie or read the story.

The production runs through Jan. 29 at The Rogue Theater, 300 E. University Blvd., in the historic Y.

Tickets are $42, with discounts available, but they must be purchased in advance.

World Baseball Classic games to be played in Phoenix