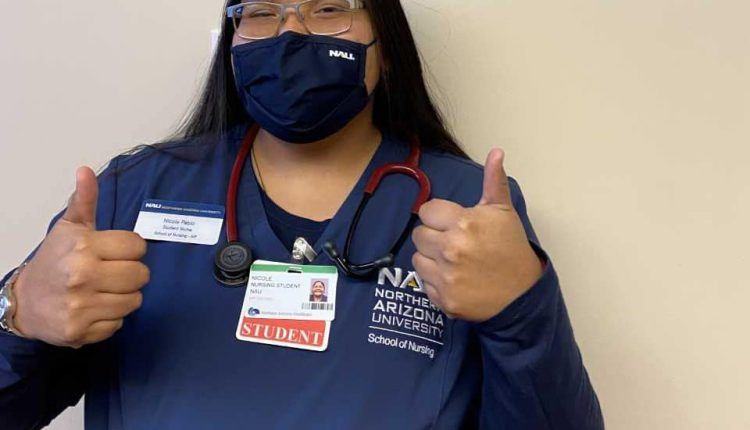 For nursing grad, advocating for the Navajo Nation is her future – The NAU Review

In fall 2020, Nicole Pablo found herself in a scary, tragic learning environment—a COVID ward on the Navajo Nation. The virus, which was rampant everywhere, was taking an even greater toll on Native tribes, and the nation was no different.

Pablo, an NAU nursing student, was doing her first round of hands-on training at the Tséhootsooí Medical Center in Fort Defiance. Panic and fear sought into the hallways, pervading every corner as the deep coughs brought on the respiratory illness. Friends, coworkers and multiple generations of families were admitted to the hospital.

“I had a patient whose family member was right next door trying to fight for their life,” she said. “It was heartbreaking seeing families being split apart and death crawling at their doorstep.”

This could have been the experience that led Pablo to choose a different major. It could have led to her choosing a different route in nursing that didn’t put her in high-stress hospital environments. For Pablo, who graduates in December with a degree in nursing, it did the opposite. When she had the opportunity to return to Tséhootsooí Medical Center at the end of her education, she did. After graduation she hopes to get a nursing residency either in Fort Defiance or at Flagstaff Medical Center in preparation to be an ER nurse.

“My advice to other students in similar situations is to never give up, no matter what people say or think,” she said. “If you fail, that is fine; get up and try again. Success is never going to be easy. Ask for help; there are people who truly want to see you succeed and flourish. Use them. Failing is part of the process—trust the process, and finally, wherever you are in life, it is where you were meant to be.”

A family tradition of service

Pablo, who is from Coyote Canyon, New Mexico, on the east side of the Navajo Nation, is a first-generation student, but she’s not the first in her family to go into the medical field. Her grandmother was a physician assistant, and her stories and dedication inspired Pablo’s career choice.

Her grandmother isn’t around to see Pablo walk across the stage, receive her diploma or nursing pin and follow in her footsteps; she died of colon cancer in 2017. That experience led to another possible career direction—hospice and oncology. Pablo said she’d like to work with patients and families in similar situations to her family years ago. She also wants to be a patient advocate to ensure that people in rural parts of the Navajo Nation have access to adequate medical care.

She also influenced Pablo in other ways.

“She was a big part of me going to NAU; from a young age, she told me that I would go to NAU because it was far away from home but close enough to where I can visit,” she said. “That’s how I got to NAU.” 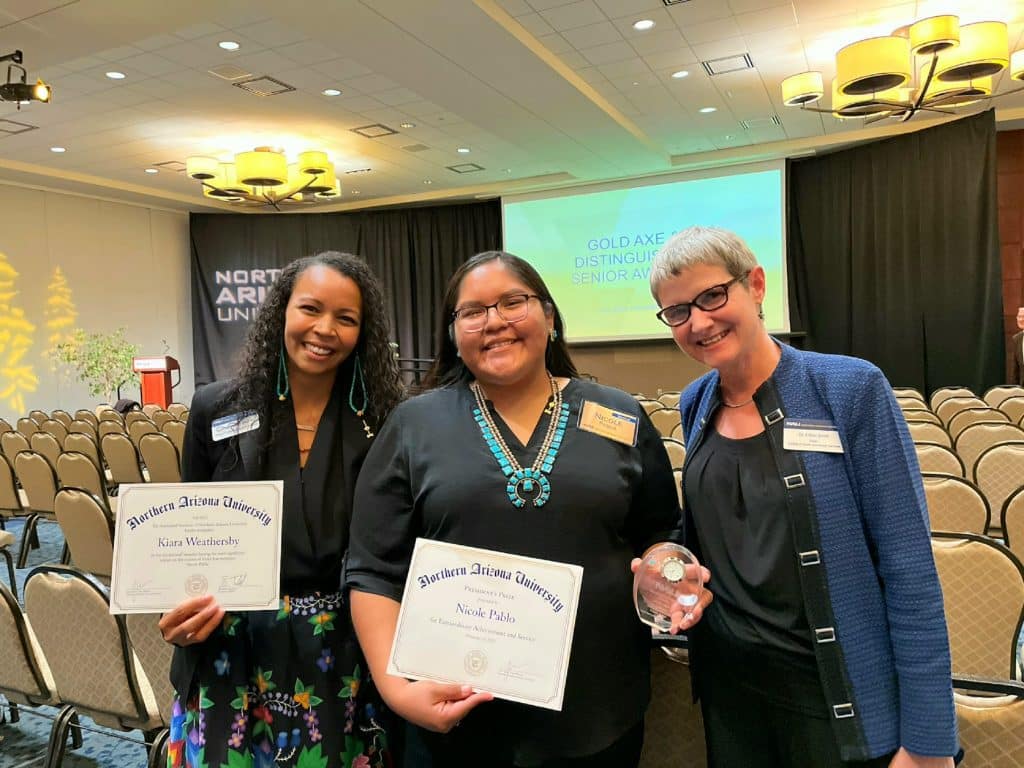 The best part about being at NAU was meeting people—friends and mentors alike—who made the experience fun and adventurous and helped her succeed. It was intimidating at first to be here, she acknowledged, as an Indigenous student on a primarily white campus. But she met other Navajo students.

She also found support at the Native American Cultural Center, including her mentor, Kiara Weathersby, a student development manager in the Office of Indigenous Student Success (OISS). Other important mentors she found at the center were SharonDoctordirector of student life experience at OISS; Andrea Sequapteva, a manager at OISS; other Ora Marek Martinezassociate vice president of the Office of Native American Initiatives.

Those relationships helped Pablo weather those moments when she wasn’t sure she was going to succeed.

“The most challenging part of my time here at NAU was dealing with the phenomenon of imposter syndrome,” she said. “Coming here to a mainly Caucasian campus was very challenging, especially as an Indigenous student, because it felt as if I didn’t belong here or that I wasn’t smart enough.”

In fact, she said, she even heard from faculty and other students that she should switch her major because nursing was too hard. Instead, that doubt fueled in Pablo an even stronger desire to succeed. Her success, among other things, included being selected as a President’s Prize winnerthe highest award that NAU gives to undergraduates.

Her final days at NAU

When the time came to select a preceptorship, there was only one place she wanted to go—back to Fort Defiance. 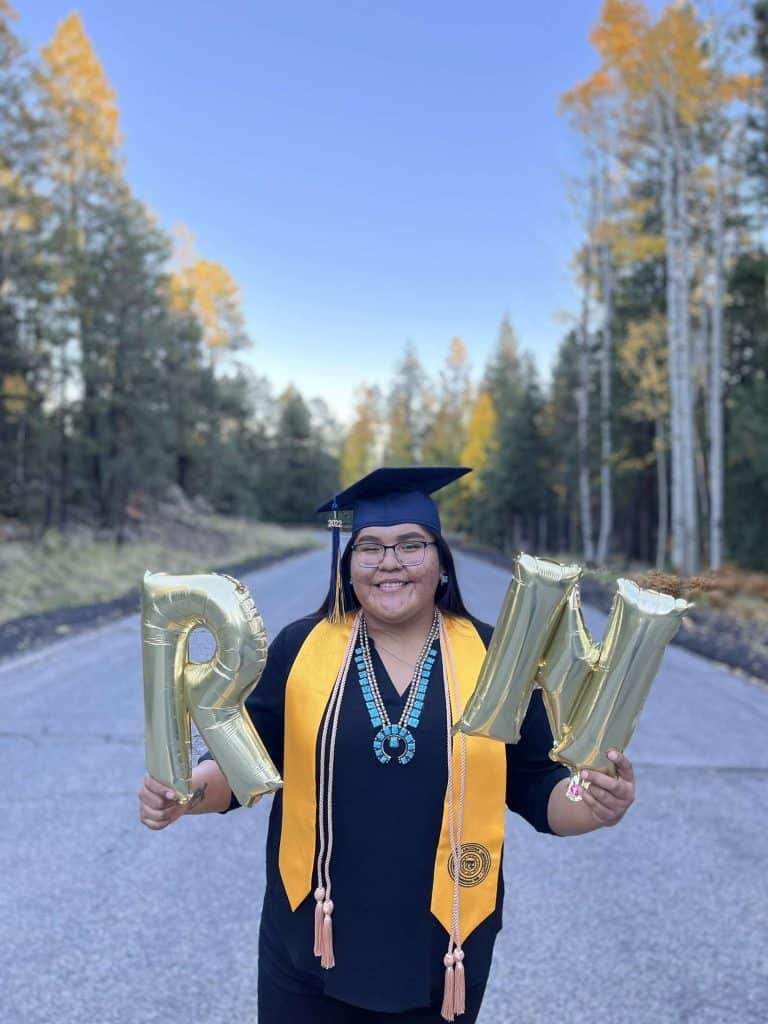 “I chose Tséhootsooí Medical Center again because something about that hospital and its staff makes me feel safe and like I’m at home,” Pablo said. “I also liked that it was very close to home, and I got to serve my surrounding community of the Navajo Nation. Giving back to the community means a lot to me and being able to do that through my preceptorship meant a lot to me.”

She also has dozens of good memories from her internship there. Yes, the COVID ward was hard, but a few months after her arrival, she shifted to giving vaccinations. She vaccinated more than 100 people in a day; seeing this shift in the pandemic helped balance her perspective.

“It’s mind-blowing how I got to see it at its worst but also got to see everything to where it is right now,” Pablo said.

She also has one deeply personal, critically important motivation for going home to the Navajo Nation and taking care of her community. It also goes back to family. Pablo’s grandfather died of COVID-19 in 2020, in the early days of the pandemic, when the disease felt uncontrolled and uncontrollable. Everything changed for Pablo then.

“After his death, that hit my family and me so hard that it took his passing away for us to take this virus seriously. With all his love and encouragement, he was a significant part of my getting here,” she said. “If he’d had the options we have today—it frustrates me because his passing could have been prevented. His death helped me get through taking care of the patients in the hospital with COVID, and my grandfather was a massive help in getting me through that rough time when COVID was rampant. Knowing he will miss everything happening this month breaks my heart because I will walk across that stage with my grandmother and grandfather in my mind and spirit.”

Majority of Arizonans trust elections, despite persistence of election denialism