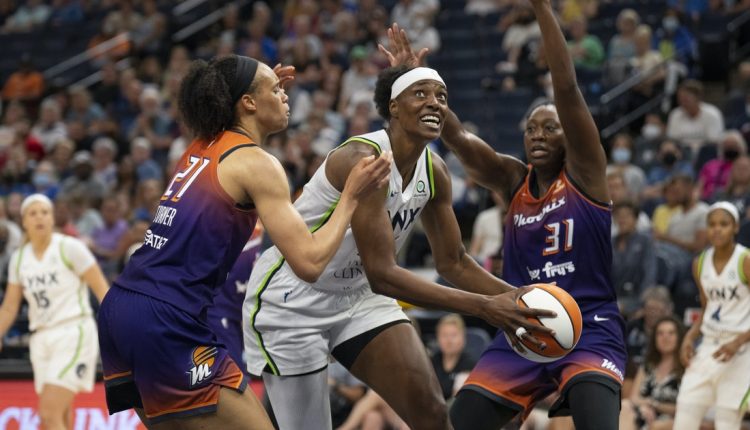 Fowles returns, Lynx wins second in a row over Phoenix, 100-88

It took a while. But after a 100-88 victory over Phoenix Thursday at Target center — their second victory over the Mercury in three days — the Lynx have an honest-to-goodness winning streak.

Riding balanced scoring, a strong bench and the return of center Sylvia Fowles, the Lynx (5-13) won consecutive games for the first time this season, setting a season high in first-half points (60) and total points.

The Lynx used a 20-2 run from late in the first quarter into the second to take the lead for good, leading by as many as 16.

On a night when the team celebrated the 50th anniversary of Title IX legislation, they also welcomed the return of Fowles, who had missed five games with cartilage damage in her right knee. Before the game Lynx coach Cheryl Reeve said pregame that Fowles, in her final season, would probably not be 100% again this season, but that Fowles — with a true minutes limit — would play. Wednesday Fowles was named an All-Star Game starter and co-captain.

She was one of five Lynx starters who scored in double figures: Moriah Jefferson had 21, Damiris Dantas had 15, Kayla McBride 15 and Aerial Powers 12.

The Lynx continued their impressive ball movement with Fowles back. Minnesota had 25 assists. And, on a night when the Mercury (6-12) shot near 50 percent all night, Minnesota used a 42-22 rebounding edge to score 18 second chance points.

After taking a commanding 16-point lead, Phoenix never got closer than seven.

The Lynx struggled to defend early in the first quarter, but they were efficient enough offensively to stay close. Phoenix made eight of its first 10 shots, including five of seven threes while taking a four-point lead in a quarter the featured three lead changes and five ties.

But the Lynx tightened up defensively and finished the quarter strong. Holding Phoenix to zero points on 0-for-4 shooting, the Lynx outscored the Mercury 12-0 over the final 2:49 of the quarter to take a 33-25 lead. McBride, Bridget Carleton and Rachel Banham all had three points in the run, including a 30-foot three-pointer by Banham to end it.

That roll kept going. The Lynx opened the second quarter 8-2 — four Lynx players scored — giving the Lynx a 20-2 run from 2:49 left in the first quarter until there was 2:03 gone in the second. It also put the Lynx up 14 points.

Then it was the Mercury’s turn, with an 11-2 run that drew them within seven with 2½ minutes left in the half. But the Lynx responded, finishing the half 8-3 to go up 60-48. The Lynx led despite Phoenix shooting north of 57 percent thanks to a 14-2 edge on second-chance points and a 15-2 edge in bench scoring. It was Minnesota’s highest-scoring first half of the year by 10 points.

The third quarter was full of runs. Phoenix opened it 8-2 with the Lynx missing five of their first six shots, and that 12-point lead was down to six. The Lynx responded by pushing the lead back to 14 on Jefferson’s drive.

By the time the quarter ended things were pretty much the way they were started with it. The Lynx led by 13, 81-68, entering the fourth quarter.