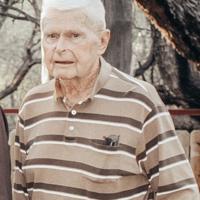 Franklin Edward Robinson, 87, passed away on October 5, 2022, in Marana, Arizona. He went to be with the love of his life, Hazel Mae (Dunn) Robinson, who preceded him in death on October 30, 2020. Ed was born in Greene County, Pennsylvania on December 24, 1934. He moved to Arizona and attended Arizona State University where he earned a bachelors and masters degree in counseling and education. Ed met Hazel while attending ASU and they were married on September 7, 1957. Ed taught school in Tempe for a short time before moving to Alaska, where he and Hazel taught in the villages of Kotzebue and Shishmaref. Ed and Hazel came back to Arizona and ended up in Flagstaff in 1971. Ed was a counselor at East Flagstaff Junior High School, then moved to Coconino and Flagstaff High Schools where he was a career counselor. He touched many young lives in his 20 year career in Flagstaff. He enjoyed talking to everyone, never met a stranger and always had a joke to tell.

After retiring from Flagstaff Unified School District in 1991, Ed and Hazel enjoyed a summer home in Soldotna, Alaska and a winter home in Apache Junction, Arizona. Ed enjoyed fishing in Alaska and playing golf in Arizona.

A celebration of life for Ed and Hazel is being planned for January of 2023 in Apache Junction.