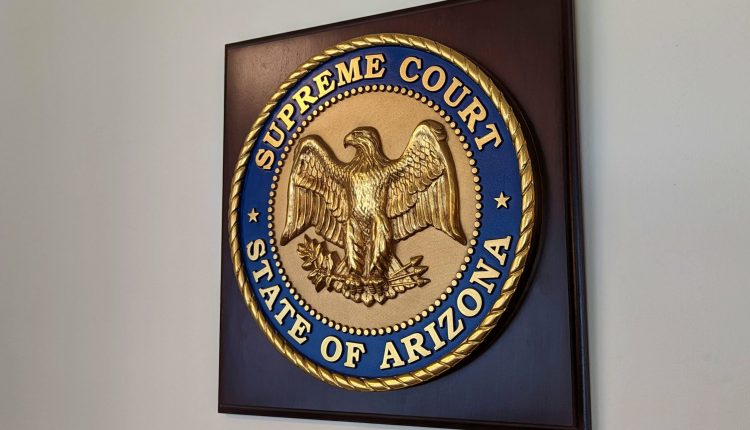 A ballot initiative to reform elections and campaign finance laws was barred from the November ballot on Friday afternoon by the Arizona Supreme Court after a week of legal activity that saw the measure’s fate reversed.

When the dust settled, the Arizona Free and Fair Elections Act, which sought to make sweeping changes to Arizona’s election and campaign finance laws, fell just 1,458 signatures short of qualifying for the November ballot.

A day earlier, Maricopa County Superior Court Judge Joseph Mikitish ruled the ballot had 2,281 more valid signatures than the 237,645 it needed to appear on the general election ballot.

But late Thursday, the Supreme Court said it was unable to verify Mikitish’s math and ordered him to clarify it on Friday morning. When he did, Mikitish revised his calculations and concluded that the initiative fell short, disqualifying it from the ballot. The Supreme Court affirmed that ruling a few hours later, despite an appeal from Arizonans for Free and Fair Elections, which backed the bill, claiming that Mikitish’s new math was flawed.

Stacy Pearson, the group’s spokeswoman, said the outcome was disappointing, and serves as evidence that the provisions in the ballot initiative are sorely needed in Arizona. Among the measure’s many proposals were ones that would make it harder for opponents to use the courts to remove initiatives from the ballot.

In an emailed statement, Pearson said the court’s decision to invalidate the initiative was the direct result of conservative backlash.

“Voters turned in 475,000 signatures — double the 237,645 requirement. But, Governor Ducey’s expanded and stacked Supreme Court found a way to invalidate over 50% of the signatures,” she said.

In 2016, Ducey and the GOP controlled legislature expanded the Supreme Court from five to seven judges. Pearson noted that the decision was out of step with both voter sentiment and previous rulings, given how many signatures were gathered in support, and the approval ofthe Secretary of State, 14 county recorders and Mikitish himself

The Arizona Fair Elections Act would have struck down several GOP-backed election laws and practices that critics say have led to voter disenfranchisement. Its many reforms included a ban on legislative audits of elections (like the so-called state Senate “audit” of Maricopa County’s 2020 election), automatic voter registration when people apply for drivers licenses or state IDs, and the restoration of the Permanent Early Voter List, or PEVL — weakened last year by a law requiring election officials to kick voters off the rolls when they miss multiple elections. As much as 90% of registered voters in Arizona use the system to vote by mail.

The initiative also proposed dramatic changes to funding streams for candidates running for political office. It slashed campaign contributions from individuals and political action committees from $6,250 to $1,000 or $2,500, depending on which office a candidate is aiming for. At the same time, the initiative boosted the funding of publicly financed candidates using the state’s Clean Elections system by twice the current amount.

Scot Mussi, president of Arizona Free Enterprise Club, called the initiative “radical” and said the included provisions would threaten election integrity in the state. Same-day voter registration, which was included in the initiative, is particularly dangerous, he said, because it could allow people to vote multiple times or even vote when they’re not eligible.

The initiative included guidelines for registering on Election Day. It required that voters certify via signature and under penalty of perjury (punishable by three years in prison, under state law) that they haven’t voted elsewhere. They would have also been required to meet current registration requirements, which includes providing a voter’s name, address, date of birth and some form of identification.

Mussi also took issue with increasing the Clean Elections financing system to support publicly financed political candidates, which he said forces voters to subsidize campaigns they may not back.

“It’s forcing taxpayers to pay for speech that they may or may not believe in,” he said.

Arizona voters created Clean Elections in 1998, making the state one of the first in the nation to implement a publicly funded campaign finance system. Almost all of the funding for Clean Elections comes through court fees; none of it comes from taxes.

Mussi said the restoration of PEVL also harms voters, as it costs money to send early ballots to voters who don’t use them or have moved.

“We should not just be sending ballots out in perpetuity,” he said. “We need to clean up the system.”

Current law directs county recorders to verify voter addresses by May 1, ahead of an upcoming general or primary election. If a voter has moved, recorders update that information and send a mailed notice of the change. Voters have 35 days to respond. If they don’t, their registration is put under inactive status and ballots won’t be mailed. Multiple years as inactive will require voters to re-register.

Ultimately, relaxing voter access to the ballot box isn’t a good idea, despite what supporters of the initiative may say, according to Mussi, who said Arizona’s existing election laws dissuade fraud.

“(They) ensure we have an easy to vote, hard to cheat system,” he said.

Arizonans for Free and Fair Elections, however, disagrees with Mussi’s assessment. The work will continue, Pearson said, especially because efforts to stifle voter-led democracy are ongoing. She pointed to the measures that Republican lawmakers sent to the November ballot as proof. Proposition 129 requires ballot initiatives to be limited to a single subject, while Proposition 132 requires initiatives to garner 60% supermajorities for voters to enact tax changes. Both make it harder for Arizonans to add initiatives to future ballots that voters themselves approved.

“Despite this setback, Arizona voters will never give up our fight to protect our freedoms and the will of the people. We will turn out in November to vote NO on Propositions 128, 129, and 132 to safeguard future ballot initiatives in Arizona, and continue organizing in support of the pro-voter policies in the Free and Fair Elections Act,” Pearson said in an emailed statement.

Beth Phoenix Weighs In On Possible Match With Rhea Ripley