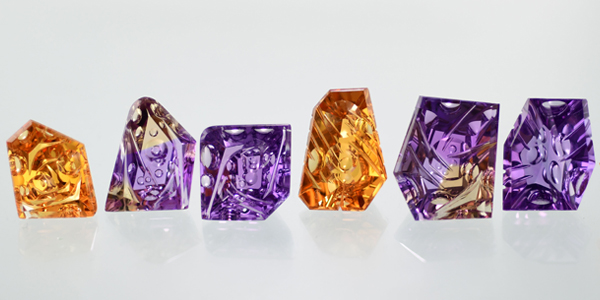 With a new year upon us, the industry is abuzz with the trends, talks, and visual treats set to be revealed at this year’s Tucson gem shows.

Among the debuts is a new lapidary style created by award-winning carver, Michael Dyber. Dubbed the “Dyber Illusion Lines,” the technique creates a novel visual which can help create one-of-a-kind pieces, the lapidarian says.

Specifically, he explains, when looking through the gem’s table, the lines curve around the pavilions, but, when viewed from the back, the illusion lines are perfectly straight.

“Ninety-nine per cent of my work is asymmetrical but visually balanced, and, thus, requires a custom-made setting,” Dyber says. “It inspires the designer to think differently about designing around a gemstone using unique materials in creative ways.”

Attendees of the American Gem Trade Association (AGTA) GemFair can check out the technique by visiting the James Alger Co. booth (200) at the Tucson Convention Center, Jan. 31 to Feb. 5.

The Best Cannabis Moments in Metro Phoenix of 2022