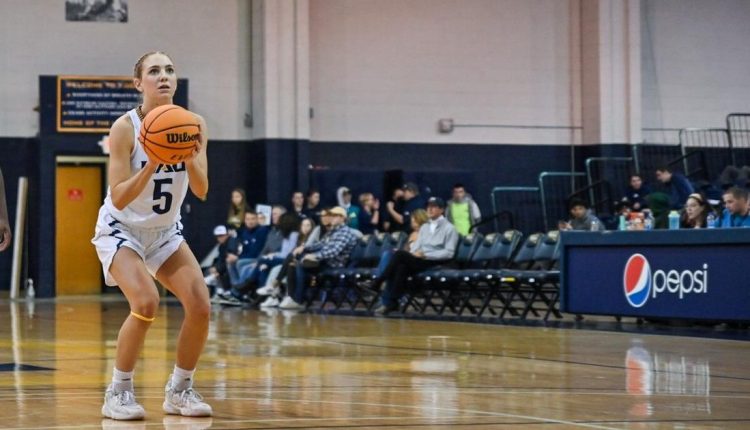 The Northern Arizona women’s basketball team knew the roster would look a bit different this year. The Lumberjacks graduated five seniors, many of whom were regular starters and contributors for several years.

The Lumberjacks brought in Montana Oltrogge, a graduate transfer from Idaho State, ahead of the season to shore up some depth, but still had to fill out the rest of the roster. Thus, a class of five freshmen came to Flagstaff.

Mary McMorris, Taylor Feldman, Audrey Taylor, Sophie Glancey and Saniyah Neverson each bring their own set of skills to the team. And each freshman has been tasked with showingcasing those talents early in the season.

Off of a successful 2021-22 campaign that saw the Lumberjacks reach the Big Sky Conference tournament final, and get just a win away from making the NCAA Tournament, Northern Arizona has a goal of getting back there.

To do that, the Lumberjacks are relying on their new players to contribute out of the gates.

“A lot of our freshmen are ready to play at the elite level that we’re expecting them to be at,” Lumberjacks coach Loree Payne said.

Four of the freshmen scored double-digit points in a 111-44 win over Park University Gilbert on Sunday. Neverson was the only freshman who didn’t play, as she was battling illness on the bench. Glancey started, as she has done a few times already, and the others all played important roles.

Through the early part of the season, they are enjoying their time with the Lumberjacks.

“I think it’s been really exciting,” Glancey said. “And it’s a cool experience, because a lot of freshmen all over — like a lot of my friends — don’t get the opportunities we are getting here, because we have so many freshmen. So it’s a unique chance to come on and play early.”


Many of the freshmen make up the majority of the second unit. They all know they are expected to keep up the same production when the starters are out. As such, they will become even more important as the Lumberjacks eventually move into conference play.

“It puts us in a really good position,” McMorris said of the young group’s role, “because we follow behind the ones that are older than us, and they show us pretty good examples of what to do.”

It hasn’t always been easy. Payne said the coaching staff had to be more patient in their teaching than years past when there were so many veteran players. Even in Sunday’s easy win, the freshmen accounted for 10 turnovers.

That was one of the benefits of the game against an NAIA school, though, as it allowed Northern Arizona’s greener players to work through a few mistakes and learn the system better ahead of some important games.

Payne said the freshmen have worked well with the staff, which also has a few new faces as assistants, to have some early success.

“I think they’ve done a great job of balancing keeping that standard high, but also teaching a lot,” she said.

The Lumberjacks were set to play three Power Five teams in as many days, starting Thursday, in the Paradise Jam in the Virgin Islands. Northern Arizona already played two Pac-12 opponents — Arizona State and Arizona — to begin the season.

The tough competition will, hopefully, form the young Lumberjacks into even better players when they eventually get into the second half of the season and conference play. So far, the freshmen seem to be fitting in well.

“We’ve been coming at things with a positive energy, and I think that’s showed in the way we’ve played and the way we interact,” Glancey said.